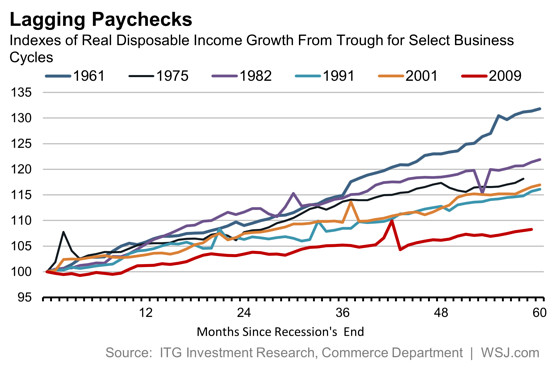 But how much of that expected gain will reflect higher prices paid at the retail level, especially for household essentials such as food, gasoline and pharmaceuticals? All three categories are rising faster in price than overall consumer inflation. What’s key to the consumer outlook: Higher grocery, drug and energy bills leave less money to spend at other retailers.

That budget squeeze shows up in a survey released last Friday by Gallup: 45% of Americans say they are spending more than they did a year ago–but much of the increased spending is on household essentials.

The Gallup poll shows nearly three out of five households are spending more on groceries and gasoline, 45% say they are shelling out more on utilities, and 42% are spending more on health care. At the same time, a large share report spending less on nonessential items such as travel, dining out and consumer electronics.

Households have had to choose between staples and splurges because personal income has grown at such a weak pace in this recovery.

“Data on jobs and wages suggest real growth in consumer spending has been and remains pretty much dependent on the expansion of employment, not wages,” says Steven Blitz, chief economist at ITG Investment Research.

As a result, he says, the growth in income so far in this recovery lags well behind gains in past upturns that lasted this long.

That’s a similar finding of the economic data analysis firm The Liscio Report, whose authors–Philippa Dunne and Doug Henwood–calculate real per capita disposable income has grown just 3.1% over the 19
quarters of this recovery.

“That’s a total, not an annual average,” the authors note, and is far below the 12.9% averaged in the 10 previous upturns.

Demand has done better, but even the 7% gain in real spending so far is about half the 13.4% averaged over the previous 19 quarters.

“Clearly, spending growth has outstripped income growth, but it’s not like people are binging,” write the Liscio editors.

The higher costs to put food on the table and gas in the tank raise a yellow flag for back-to-school sales.

Economists at IHS Global Insight forecast back-to-school spending will be up 3.6% this year. That’s down from the 4.9% gain seen in 2013, but better than the 2.7% average of the past eight years. The caveat, says IHS economist Chris Christopher, is the possible downside risk from higher pump prices in the third quarter.

ITG’s Mr. Blitz thinks nominal back-to-school spending could be up 4%. But like IHS, he warns the forecast holds only if gas and food prices don’t spike.