If Hillary Clinton runs for president, expect to see lots of claims about the growth record of Bill Clinton‘s presidency. The economy enjoyed a long economic expansion in the 1990s and Mrs. Clinton will seek to remind voters of the gains of that era.

She aired one of those claims in an interview with Charlie Rose, in which she compared the economic record of President Bill Clinton with President Ronald Reagan. Specifically, she said: “if I just were to compare Reagan’s eight years with Bill’s eight years, it’s like night and day in terms of the effects, the number of jobs that were created, the number of people lifted out of poverty — 100 times more when Bill was president. And did policies have something to do with that? I would argue that they did.”

Here we’ll explore the jobs numbers and examine the poverty statistics in a separate post. 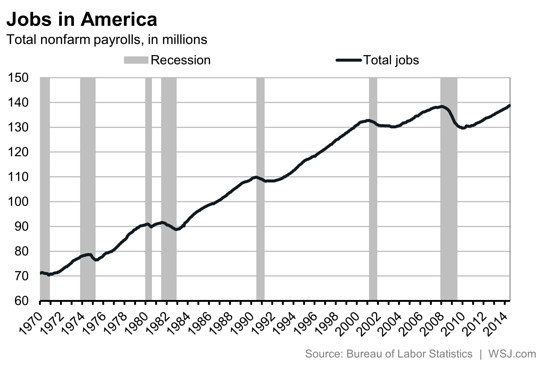 Since 1970, the American economy has doubled the number of jobs, from 70 million to about 140 million. Most of that job growth occurred during two extraordinarily long economic expansions in the 1980s and the 1990s. The 1990s and 1980s, in fact, were the longest and third longest period of growth in U.S. history, according to the National Bureau of Economic Research.

The factors driving economic growth and job creation are complex, and among the key determinants of how long expansions last are changes in the nation’s demographics, the shifting structure of the economy from manufacturing to services, international stability and global trade, and the success (or failure) of Federal Reserve policies. But, of course, different eras have different presidents, who are quick to claim credit for successes under their tenure or explain away failures that the previous guy caused. 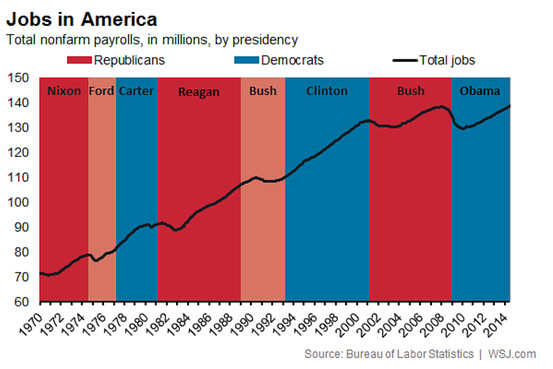 Most of the job growth of the past 40 years occurred during the presidencies of Mr. Reagan and Mr. Clinton. It’s more or less impossible to resolve whether Mr. Clinton’s policies juiced the economy as opposed to him just getting lucky with the post Cold War tech boom. Others would argue that Mr. Reagan’s tax cuts paved the way for the 1990s boom in jobs. Perhaps Mr. Reagan and Mr. Clinton both were beneficiaries of Federal Reserve Chairman Paul Volcker setting the stage for growth by squashing the inflation of the 1970s and setting up an era of falling interest rates. These debates can (and do!) go on for years and they won’t be resolved by this post, which will just examine the numbers. 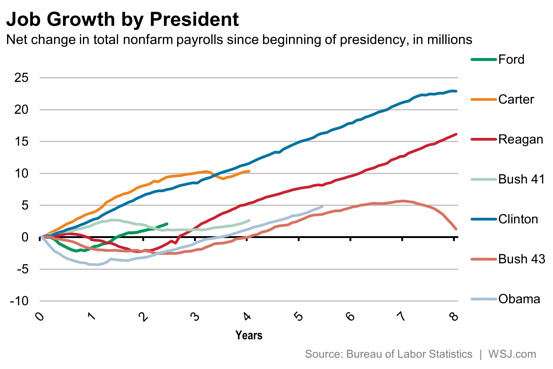 The presidencies could also be compared across GDP growth or other metrics too. One challenge comparing presidencies across the years is how quickly the country changes. Simply switching from net job creation to the percent change in job creation (no longer giving presidents credit for governing a larger country) changes the figures. 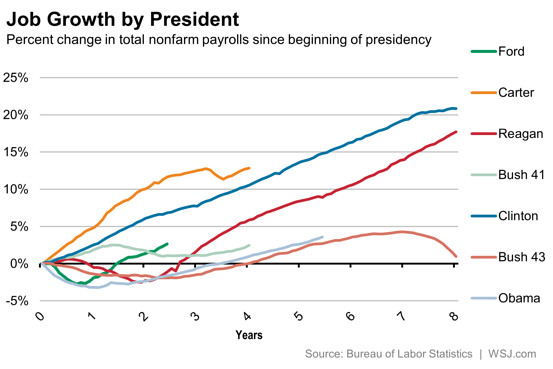 This produces a very different league table among the post-World War II presidents.

Comparing Harry Truman to Lyndon Johnson to Ronald Reagan is, obviously, a bit ridiculous. The U.S. at the end of World War II was not at all the same as the U.S. at the end of the Cold War. The nation’s economy and demographics were vastly different, and over long periods of time the main driver of job growth tends to be population growth, rather than any sort of public policy. 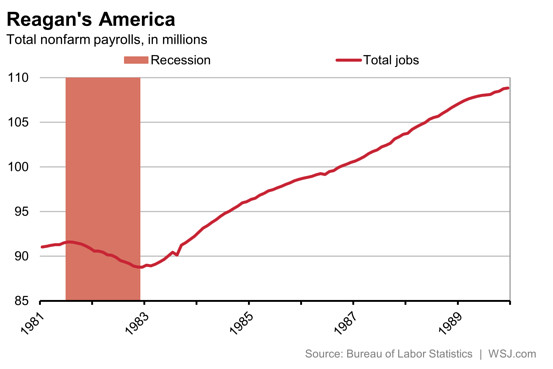 But the real problem with comparing presidents on the basis of job growth is that it gives presidents a great deal of credit for timing their entry to office. The president can’t reasonably be blamed for the economic environment and the amount of job creation in the immediate months in which they take office. For Mr. Reagan, record high interest rates from the Fed plunged the economy into a deep recession within a few months of him entering office. There’s little reason to believe any president could have averted this recession.

Once the economy emerged from that recession, Mr. Reagan’s record on job growth was very strong. (Of course, if you don’t blame presidents for recessions when they immediately took office then President George W. Bush gets something of a pass for the 2001 recession and President Barack Obama is off the hook for the recession when he took office. And maybe Mr. Clinton should get some blame for that 2001 recession, and so on and so on.)

The bottom line: although this is an inherently flawed way to compare presidencies, Mr. Clinton’s economy generated more jobs but Mr. Reagan’s also generated a huge number of jobs, especially once the recession at the beginning of his presidency had ended. If any future president were again to govern over comparable periods of job creation, it would be a great economic success.