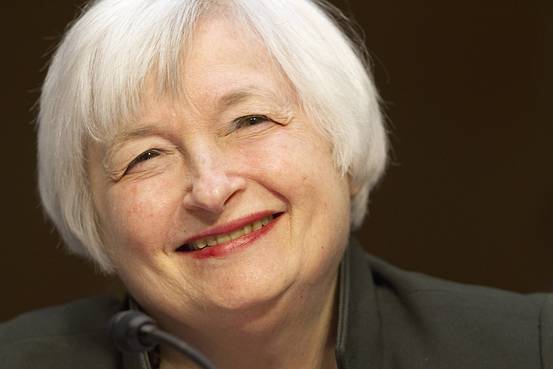 Over two and a half years, the job metrics Janet Yellen has been watching have, slowly but significantly, improved.
JACQUELYN MARTIN/ASSOCIATED PRESS

In March 2013, then-Federal Reserve Vice Chairwoman Janet Yellen said she was going to be closely monitoring the labor market’s churn—the millions of monthly hirings and firings and quits and retirements that underlie the net job gains reported by the Labor Department each month. Slowly but surely, the three indicators have improved the way now-Chairwoman Yellen hoped. Layoffs have not risen, the rate of hiring has accelerated, and the share of people voluntarily quitting has climbed, according to an update today from the Labor Department’s monthly Job Openings and Labor Turnover Survey, known as Jolts. The progress of the labor market along these dimensions underscores the central bank’s confidence that the economy is finally healthy enough for the Fed to raise its target interest rate for the first time in nearly a decade. 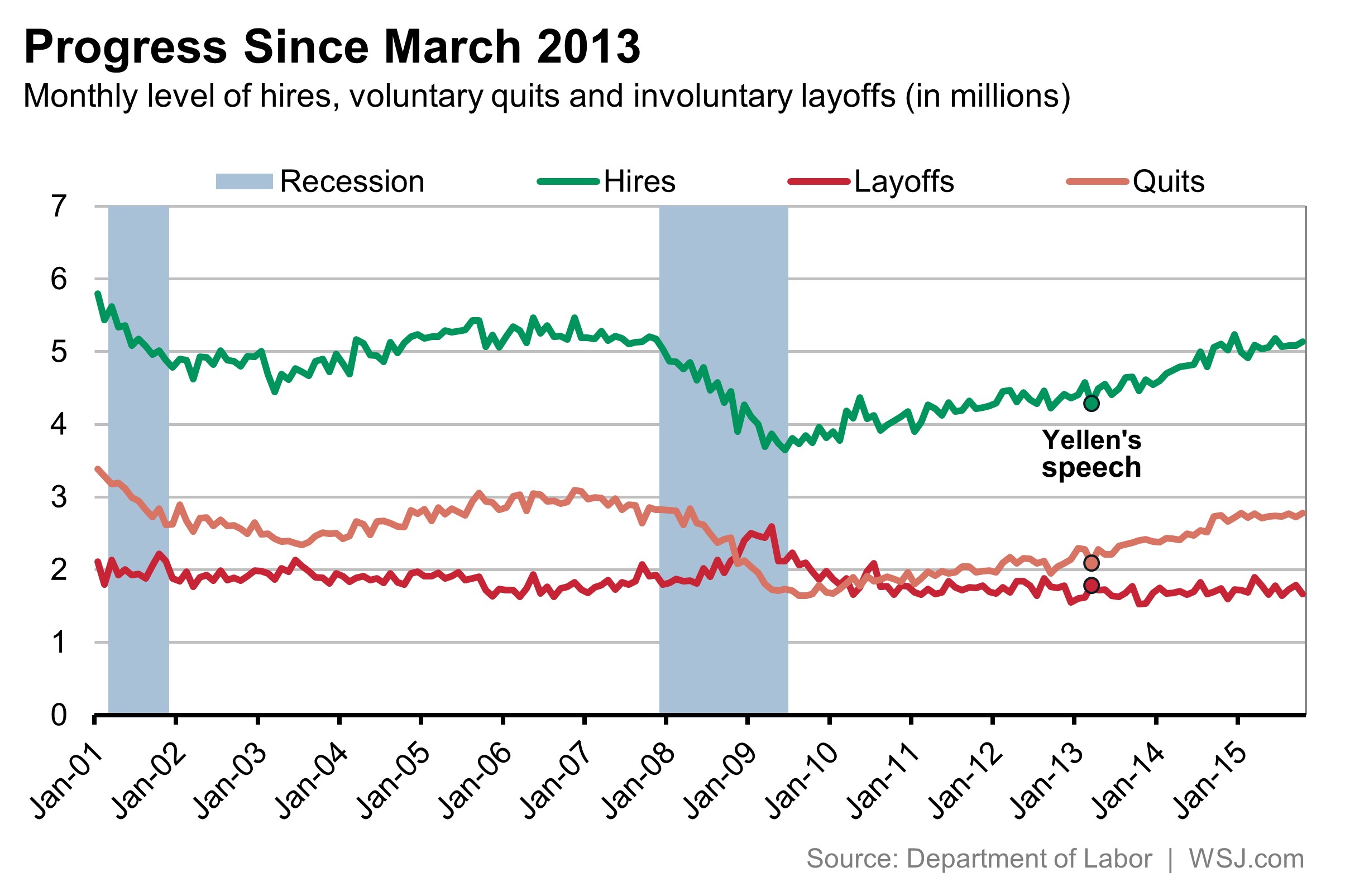 In March of 2013, about 2.1 million workers quit their jobs, a rate of about 1.5%. Those numbers have improved slowly enough that the improvement is hard to notice from one month to the next (in this month’s report, all the key measures were “little changed”). But over the course of the past two and a half years, the improvement has been considerable. In October, 2.8 million people quit their jobs, a rate of 1.9%—roughly the same as in December 2007, the month the economy began to decline into recession. Ms. Yellen had said in her speech “a pickup in the quit rate, which also remains at a low level, would signal that workers perceive that their chances to be rehired are good–in other words, that labor demand has strengthened.” Put another way, just under half of the people who left a job in March 2013 did so voluntarily. The majority of job separations were still involuntary layoffs or departures due to retirement, death or disability. Among people who left a job in October, by contrast, 57% did so voluntarily. 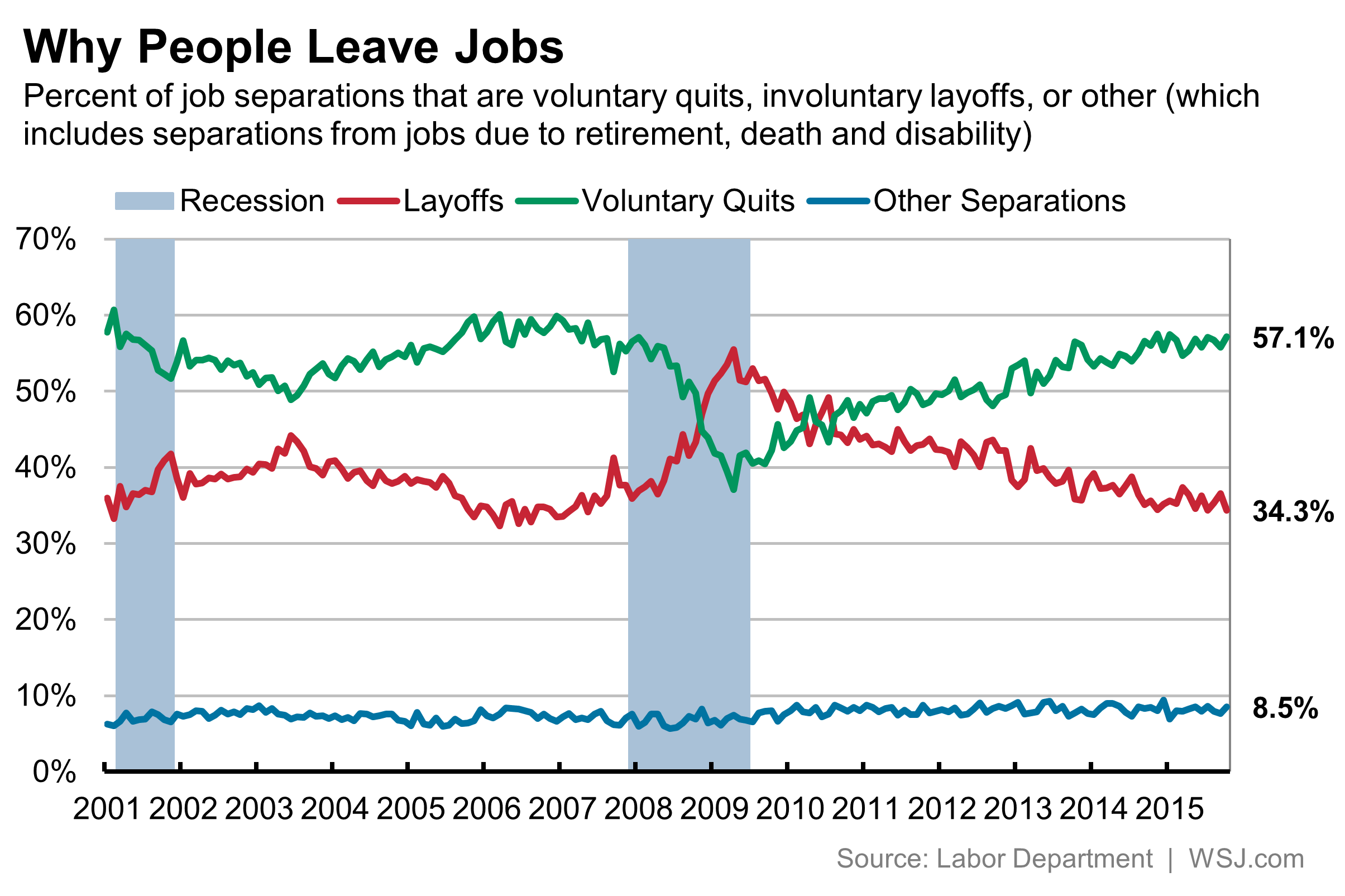 Layoffs, on the other hand, have remained persistently low: There were 1.8 million layoffs in March 2013 and 1.7 million in October 2015. The rate of layoffs has held steady between 1.1% and 1.3%. The layoff rate skyrockets during recessions, but falls as the economy improves. A layoff rate of 1.1% is the lowest in the history of the series. In her remarks, Ms. Yellen had said “layoffs and discharges as a share of total employment have already returned to their prerecession level, while the hiring rate remains depressed. Therefore, going forward, I would look for an increase in the rate of hiring.” Since then, the monthly pace of hiring has climbed to 5.1 million from 4.3 million. The level and rate of hiring is almost exactly where it was in December 2007. That’s not to say all has been well with the economy—the pace of recovery has been grindingly slow at a time when millions of unemployed workers were desperate. And there are still puzzles in this data. The monthly level of job openings has risen to record highs. Hiring has recovered much more slowly, a sign that something is not quite right: Employers are just not filling all of their available jobs. But over two and a half grinding years, the metrics Ms. Yellen has been watching have, slowly but significantly, improved. 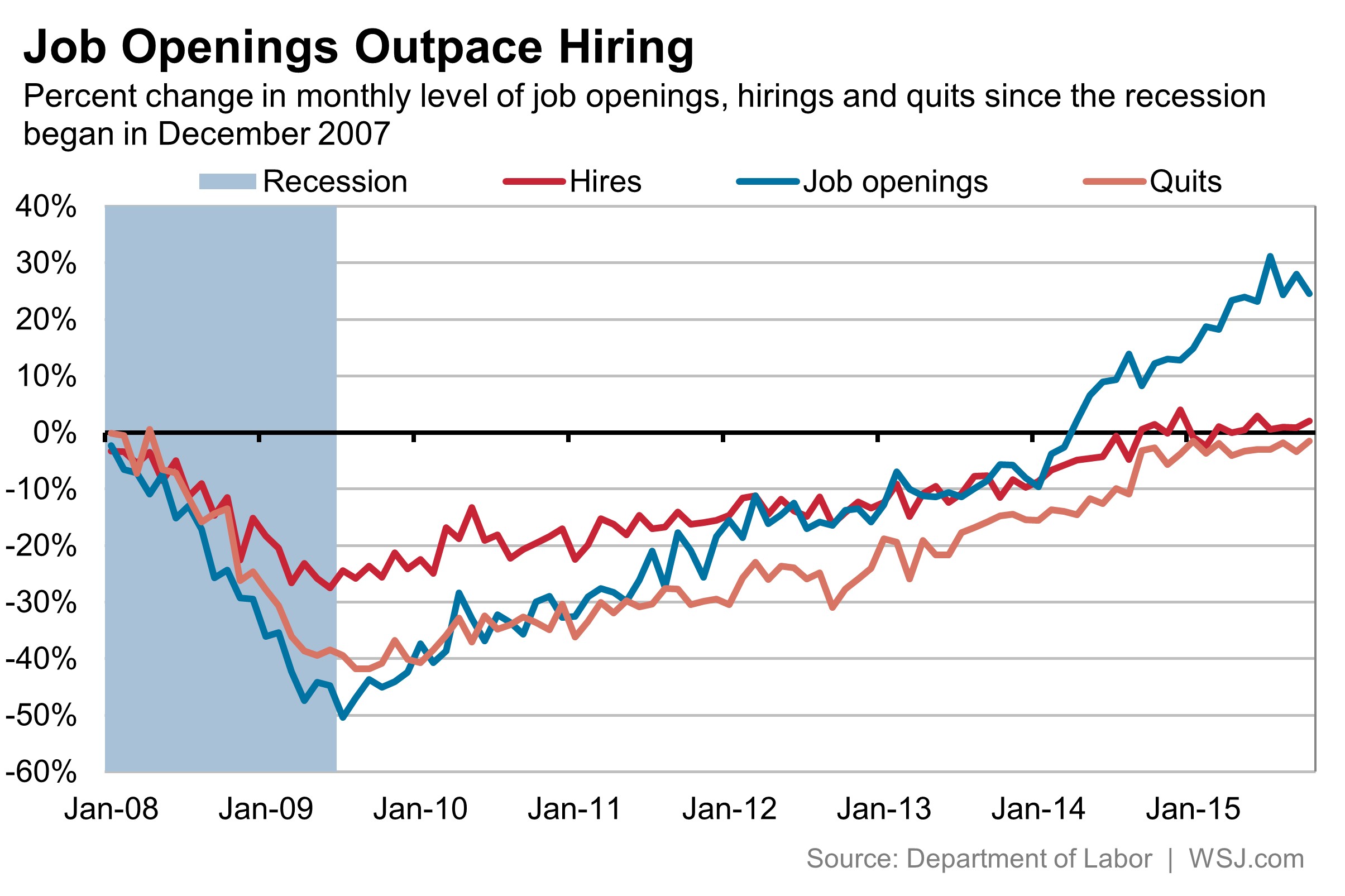