The recent hiring spurt—one of the best stretches since the late 1990s—has gotten a surprising lift by a major sector: government.

In June, all levels of government added a seasonally adjusted 26,000 employees. That gain outpaced the manufacturing and construction sectors — combined. Rising government employment not only adds to the total hiring figure, it also represents growth in a relatively well-paying field.

Public-sector employment grew by 54,000 so far this year. While that’s a modest fraction of the 1.4 million workers added to payrolls in 2014, it comes after five straight years of shrinking in the government workforce. 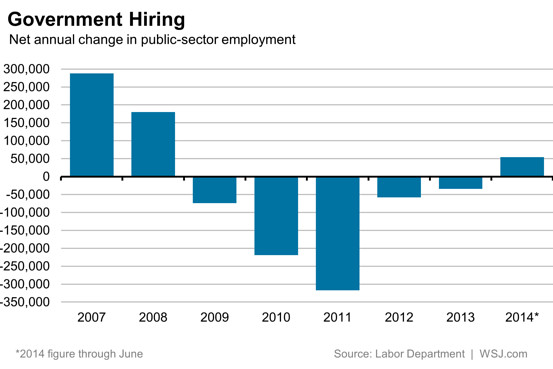 Government workers tend to be paid better than those in the fast-growing fields of retail and food service, and they typically receive health and retirement benefits. Well-compensated workers could support stronger spending and faster economic growth.

Municipal governments, which include public schools, have led the recent gains. Last month, local governments added 22,000 workers, while federal and state workforces grew by just 2,000 each.

The numbers likely reflect a stabilization in municipal finances, which are largely tied to home values and related property taxes. Crashing home prices during the financial crisis caused municipal tax revenue to fall, pushing employment down.

A return to government hiring also could have long-term benefits for the economy, said William Spriggs, chief economist for the AFL-CIO. Weak hiring by governments over the past five years suggests investments were not being made in education and infrastructure, he said.

“If we continue to cut investments, we’re not talking about headwinds,” Mr. Spriggs said. “We’re really talking about an anchor to long-term growth.”

The AFL-CIO has another reason to advocate for government hiring. Last year, 38.7% of public-sector employees were union members. That compares to just 7.5% in the private sector, according to the Labor Department said.