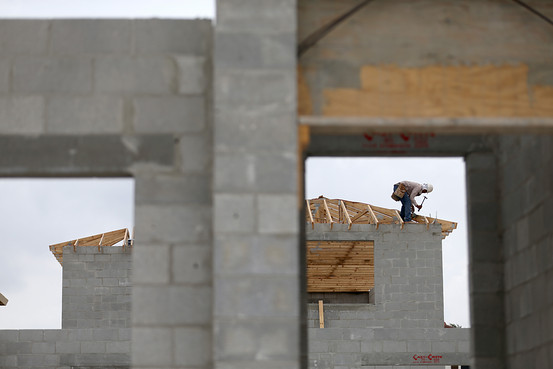 The National Association of Home Builders said Tuesday that its index of builder confidence in the U.S. market for new single-family homes rose by four points to a seasonally adjusted level of 58 this month. It ticked up two points in the South to 62, as in this Miami neighborhood.
Getty Images

For the first time since the spring of 2006, a majority of home builders in the Northeast feel more confident than depressed about the market for newly built homes.

The National Association of Home Builders said Tuesday that its index of builder confidence in the U.S. market for new single-family homes rose by four points to a seasonally adjusted level of 58 this month. The national index jumped in September to 59, its highest reading since November 2005, then fell to 54 in October.

A reading over 50 means most builders generally see conditions as positive.

On the regional level, sentiment rose by three points in the Midwest to 56, ticked up two points in the South to 62 and climbed seven points in the West to 60. But the biggest increase came in the Northeast, where the index jumped 12 points to 51 this month.

The region last saw a reading of 50 in April 2006, and it hasn’t been above that threshold since March of that year.

It remains to be seen if the upward trend will hold in the coming months. The three-month moving average for the Northeast rose to 44 in November from 41 in October, reaching its highest level since June 2006 but remaining well below the 50-point mark.

Starts on new single-family homes declined 5.5% in the Northeast during the first nine months of 2014 compared with the same period a year earlier, according to the Commerce Department. But construction of multifamily dwellings, like apartment buildings, has been much robust. Overall, housing starts in the region are up 18.1% so far this year compared with 2013.