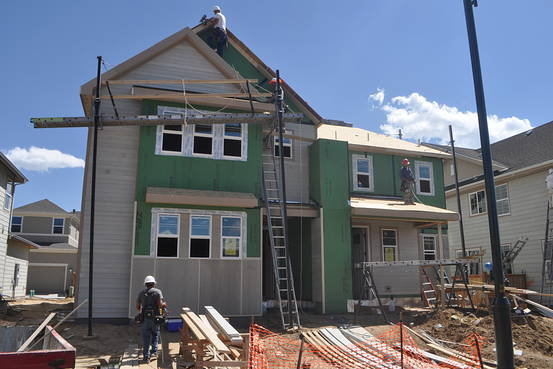 Many factors, on the demand and supply sides, continue to hinder the home-construction market in the U.S. from returning to normal. But, several home builders say, the availability of construction loans no longer is one of them.

Indeed, lenders are opening the spigot at a steady, albeit moderate, pace for commercial and residential construction alike, which bodes well for output in those industries. That, in turn, stands to benefit the U.S. economy, given that rising construction spending contributes greatly to gross domestic product.

Figures released Wednesday by the Federal Deposit Insurance Corp. show that total outstanding balances on construction loans from FDIC-backed institutions amounted to $255.8 billion in the second quarter, up 3.9% from the first. That marks the fifth consecutive quarter of double-digit, year-over-year percentage growth as construction lending rebounds from its nadir of $201.5 billion in early 2013. 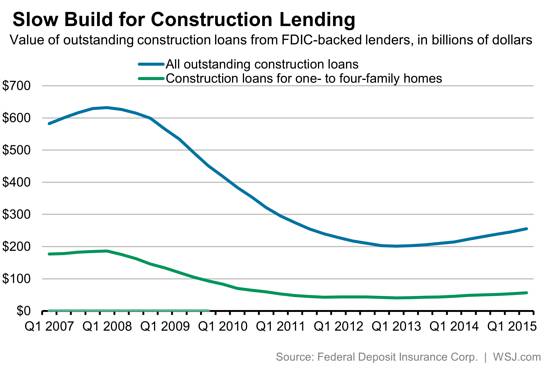 The main residential component of that total–loans for constructing homes of single- to four-family units–also continued to gain ground this year. Outstanding balances on loans from FDIC-backed institutions for building those houses totaled $56.1 billion in the second quarter, up nearly 4.7% from the first.

“For residential-construction loans, this is the fifth consecutive quarter of year-over-year growth in the range of 16% to 17.5%,” said Robert Dietz, a senior economist with the National Association of Home Builders. “Ongoing growth in residential construction loans points to additional expansion for single-family (construction) starts.”

That’s been the sticking point in recent years. Even with a good gain in new-home sales in July, the pace of sales that month amounted to only 51% of the average annual pace of the most recent normalized market in 2001 to 2003. Home construction needs to return to its normal output in order to contribute meaningfully to the U.S. economic recovery.

Opinions are plentiful on which factors are the biggest hindrances to home construction. But many say that construction lending no longer is one of them, which the FDIC figures underscore.

“I don’t see construction-loan availability as the problem now,” said Bill Davidson, owner and chief executive of California builder Davidson Communities, which anticipates building 200 homes this year. “It certainly was two years ago. But the market (demand) is not there yet for us to be building more houses than we are.”

Mr. Davidson is among those who point to weak demand to buy houses, particularly among younger, entry-level buyers, as the chief reason behind home-construction’s slower-than-anticipated rebound. Those buyers have been hobbled in recent years by a slow ramp-up in job growth, tepid wage gains, tight mortgage-qualification standards and mounting student debt. Meanwhile, Mr. Davidson said he finds construction loans “readily available now.”

Yet lenders say that the construction-loan market has made significant strides of late, with more competitors entering the fray. Russ Ruhnke, a senior vice president overseeing lending to home builders throughout the Midwest for Associated Banc-Corp., based in Green Bay, Wis., said the number of home-construction loans that the bank reviews for approval has increased by 40% to 50% in the past year.

“I do notice that we seem to have more competition…from the smaller, community banks,” Mr. Ruhnke said.

However, increased availability doesn’t mean looser terms. Many banks still won’t lend for as large a percentage of a project’s total cost as they would during last decade’s boom. And some banks want guarantees from builder executives to personally repay loans if their companies can’t, a proposal at which many builders balk.

Credit “is available, but it’s definitely more conservative,” said Gary Tesch, president of Houston-based McGuyer Homebuilders Inc., a closely held builder aiming to construct 1,500 homes this year. “On vertical construction, most banks are back in that business today. Not all are back in land-development financing.”

Some say that most perceived shortfalls in home-construction lending are actually rejections of riskier projects.

“I believe that there is sufficient supply of credit to meet the demand,” said R. Bird Anderson Jr., executive vice president in Wells Fargo & Co.’s home-builder banking group in Charlotte. “When we hear stories of a sponsor unable to get traditional senior bank debt, if you get to the details of the story you will find that it is a more speculative project or it’s a large project with high leverage requests and no recourse to the sponsor.”