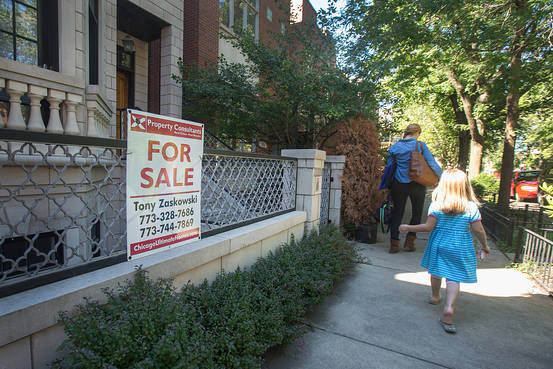 A home for sale in the Bucktown neighborhood  of Chicago in September. More than 5.4 million existing single-family homes will be sold in 2016, up from an estimated 5.3 million homes sold in 2015, says the Realtors’ chief economist.
SCOTT OLSON/GETTY IMAGES

Home sales will continue to grow next year, but will face headwinds including a lack of first-time buyers and rising mortgage rates, Realtors say.

More than 5.4 million existing single-family homes will be sold in 2016, up from an estimated 5.3 million homes sold in 2015, Lawrence Yun, chief economist at the National Association of Realtors, said at the group’s convention Friday in San Diego.

Mr. Yun anticipates that median home prices will grow at an annual rate of 5%, compared with 6% this year.

“Rising home prices are becoming an obstacle for first-time buyers,” he said.

Mr. Yun expects the rate for a 30-year fixed mortgage to rise to 4.5% from 3.8% as the Federal Reserve moves to raise short-term interest rates and the economy strengthens. That would make homes even less affordable.

The homeownership rate—which already sits near 50-year lows—will dip even further, Mr. Yun said. But that is largely a positive trend, as young people will start moving out of their parents’ basements and become renters.

Cristian DeRitis, a senior director at Moody’s Analytics, said he also expects prices and sales to rise. Mr. DeRitis said he is expecting price gains of about 3.3%.

“We’re clearly not going back to” the rate of growth during the boom, he said. “We think it’s going to be fairly contained and slow and steady.”

The Homeownership Rate Is Near a 30-Year Low. Could It Be Hitting Bottom?

In Mortgages, Here We Go Again? Not Quite