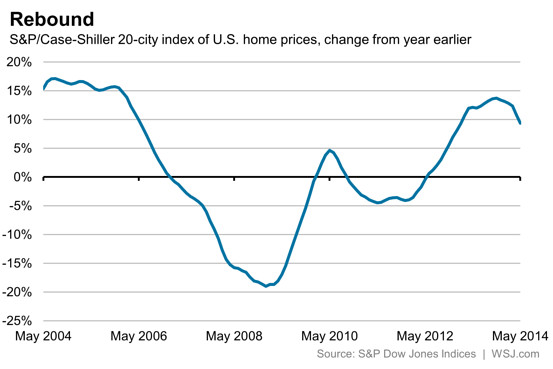 As expected, the pace of U.S. home price gains has slowed this year. Prices rose 9.3% from a year earlier in May in 20 cities tracked by the Standard & Poor’s/Case-Shiller index, down from the 10.8% increase reported last month for April.

Price gains have been expected to flatten out after sales slowed last summer following a sustained run-up in mortgage rates and prices. The Case-Shiller index is also heavily influenced by the share of homes selling out of foreclosure, and as the share of distressed sales fell two years ago, home prices began to look much better. Now that foreclosures are fading from the market, prices may show less volatility. 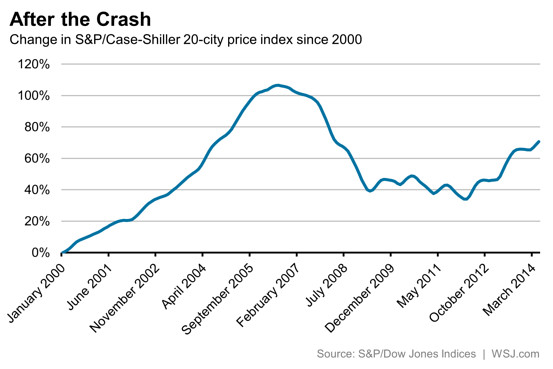 Some economists were surprised Tuesday by the index’s seasonally-adjusted series, which showed that prices actually fell in May. Home prices tend to rise in the spring and summer because there are more transactions, and prices aren’t as strong in the fall and winter, when transaction volumes decline. To account for this, Standard & Poor’s applies a seasonal adjustment to the series.

But in 2010, S&P warned that the seasonal adjustment wasn’t behaving normally because of the distorting effects of foreclosed-property sales. Because mortgage companies sell homes throughout the year, those sales followed less of the seasonal pattern exhibited by normal owners. Since April 2010, the index committee at S&P hasn’t given much attention to the seasonally adjusted data, given concerns over its reliability. 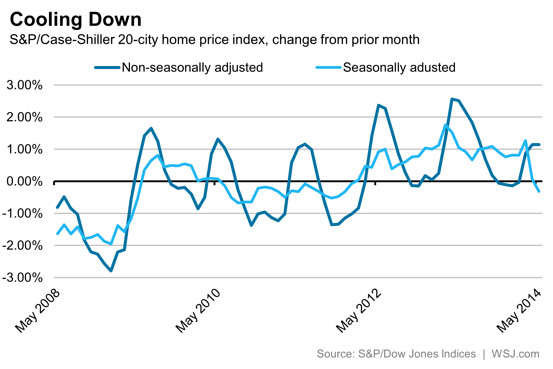 Either way, it’s clear that home prices are slowing, though it’s an open question when prices will settle at a pace of appreciation that matches income gains and inflation. Last year, huge price gains stoked fears of a bubble. A deceleration in price gains should smother those worries. 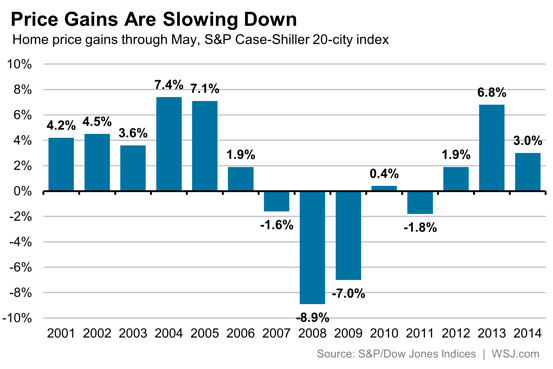 More context: Home prices are now 17.4% below their 2006 peak. By contrast, prices stood around 35% below the 2006 peak when they hit bottom in March 2012. Two cities have returned to all-time highs: Denver and Dallas. Several others, including Las Vegas and Phoenix, remain far below their previous highs, despite huge gains over the past two years. 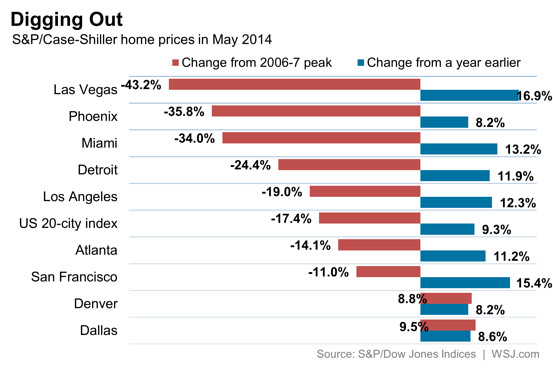 A final word on the Case-Shiller index: while it was the among the first of its kind to measure prices of homes based on repeat transactions, it isn’t perfect. The index actually measures homes on a three-month moving average and it reports on a two-month delay. That means that in late July, we’re getting a picture of home prices for the three months ended in May.

Moreover, the index reports prices based on closed transactions, and those transactions typically go to contract one to three months earlier. So in late July, we’re getting a picture of what the housing market looked like in the February-to-April period. The widely cited 20-city index is also value weighted, meaning that changes in the prices of more expensive homes in coastal California and the New York metro area can heavily influence the overall index.