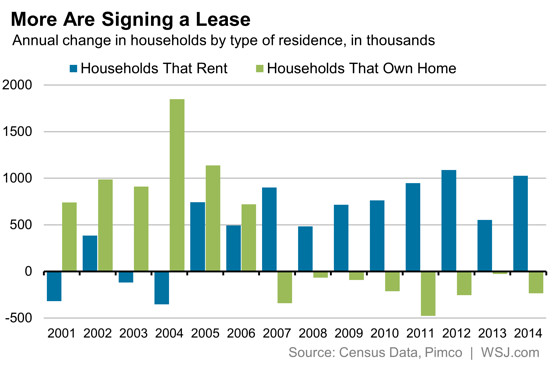 The 17% plunge in February housing starts would suggest the roof is collapsing on housing. In reality, harsh weather probably caused most of the free fall: housing starts in the Northeast alone fell 56.5% in February.

Still, home building–especially construction of single-family stand-alone residences–has not rebounded as might be expected given ultralow mortgage rates and good affordability. Even before February’s crash, single-family housing starts were running less than half the levels seen during the housing boom and are 37% below their average of the 1990s.

One reason is the absence of younger home buyers. People ages 25 to 34 are typically the source of new household formations that drive home construction.

In this expansion, young people are less likely to set up their own households. Roiana Reid, an associate in Nomura‘s economic department, found the share of households headed up by someone 25 to 34 years old has fallen far more than other age groups since 2006.

Moreover, not only are millennials not going out on their own, those that do are not buying homes.

“The growth in households since the financial crisis has been almost entirely from renters,” wrote Mike Cudzil, co-head of agency mortgage portfolio management at bond firm Pimco in a blog post. The inclination to rent explains why construction of apartment buildings is back to prerecession levels, even as single-family housing struggles.

The problem for the economy is that multiunit construction doesn’t have as much bang for the buck as single homes do. “Each multifamily housing start creates one job for every three jobs created by a single-family housing start,” Mr. Cudzil wrote.

What will change this “rent, not own” dynamic? Both the Nomura and Pimco reports argue for better job growth and bigger wage gains.

“As [the] jobs market recovers and income growth accelerates, we expect the number of first-time home buyers to increase,” she wrote, and that will improve the housing market.

Mr. Cudzil agreed. “While timing may be difficult to predict, stronger growth, lower unemployment and gradual wage growth all bode well for growth in owner households.”

In other words, housing markets will depend on the labor markets, especially the hiring and paychecks of millennials. If employers don’t come through, then housing will continue to be left behind.