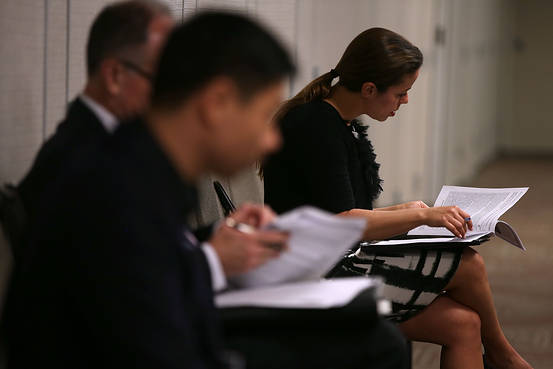 An increasing share of employers want to hire but can’t, according to a survey from PricewaterhouseCoopers.
JUSTIN SULLIVAN/GETTY IMAGES

Are you, like many Americans, wondering when you’ll ever get a raise? A new analysis hints that wage growth could be picking up.

The Trendsetter Barometer, a quarterly survey of the leaders of around 300 large privately held companies conducted by consulting company PricewaterhouseCoopers, has been a leading indicator of wage growth over the past two decades, according to an analysis by Oxford Economics comparing 80 quarters of survey data with historical economic performance. Throughout the past 20 years, sentiment in the index has predicted declines in wages ahead of recessions, as well as rising wages before economic recoveries. It also found business leaders’ views of the economy over the next 12 months was a good leading indicator for where U.S. gross domestic product was heading.

The average company in the survey has annual revenues of $300 million, and the 300-odd companies are about evenly split between manufacturing and services.

Since the end of 2010 through the first quarter of this year, the companies in the survey have anticipated average annual increases of between 2.1% and 2.9% for their hourly employees. That’s slightly higher than the rate at which private industry employers overall have raised worker wages and salaries over the same time period, a difference that could reflect the mix of businesses in the survey. In the second quarter of 2015, the average expected annual salary increase rose to 2.97%, its highest level since 2008.

“When our surveys are telling us that people are going to go out and hire…that information is predictive as to what’s going to happen over the next year. So based on what we’re hearing from these companies, we would expect to see continued moderate increases in the number of people hired and continued moderate increases in salary,” said Ken Esch, a partner at PwC. He added that privately held companies can often react more nimbly to economic conditions than their publicly traded counterparts. The most in-demand employees are those who can immediately pitch in to boost a company’s bottom line—sales and marketing specialists, for example, who can help a firm enter a new market, or data analyst who can help them improve business performance by looking at internal data.

“When they’re making hiring decisions, they’re focusing on people who are going to contribute immediately to the business,” Mr. Esch said.

Are Wages and Benefits Growing Faster Than We Think?

Just How Stagnant Are Wages, Anyway?

Here Are the U.S. Cities Where Wage Growth Has Lagged Job Growth

U.S. Wages Are Historically Great, Or They’re Awful. It Depends on Your Preferred Inflation Measure