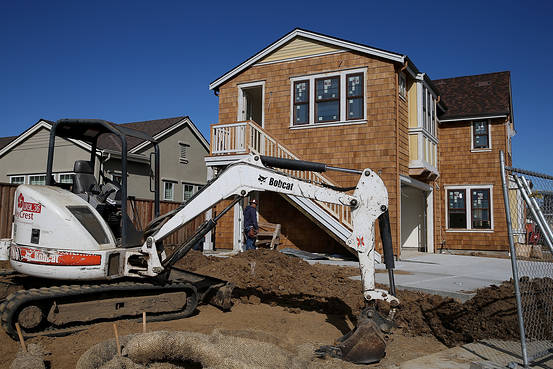 The housing analysts concluded many of the workers who went back to Mexico during the real estate crisis haven’t returned to work in the U.S. due to tighter immigration controls—both for those entering legally and those not—and comparable job opportunities in some Mexican states with improving economies.
JUSTIN SULLIVAN/GETTY IMAGES

The U.S. construction industry has lost more than half a million Mexican-born workers since 2007, contributing to a labor shortage that’s likely to drive up home prices, according to a new analysis.

Increasingly restrictive immigration policies and better opportunities abroad have resulted in less Mexican immigration to the U.S. for such work, according to a report released Monday by home-building analyst John Burns Real Estate Consulting Inc. 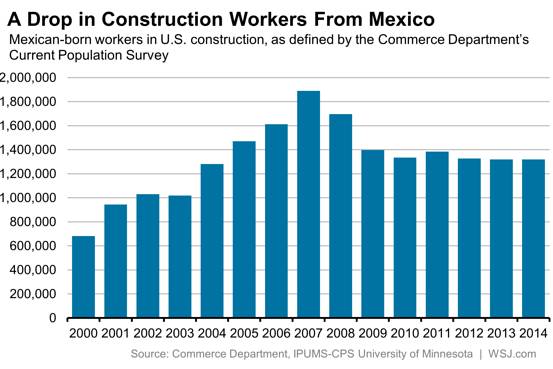 Burns chief executive John Burns and his firm’s demographer, Chris Porter, conclude that many of those workers who went back to Mexico during the downturn haven’t returned to work in the U.S. due to tighter immigration controls—both for those entering legally and those not—and comparable job opportunities in some Mexican states with improving economies.

That doesn’t bode well for a home-building industry that increasingly has cited labor shortages among the factors deterring greater production of late. Granted, U.S. construction starts on single-family homes so far this year amount to an 11% increase from the same period a year ago. Even so, the pace of construction starts in August still amounted to only about half of the average annual output in the most recent normal market of 2001 to 2003.

Builders differ on whether higher pay is needed to lure workers back into the industry, be they Mexican or American. Roy Weatherford, owner of Apex Foundation LLC, which pours foundations, driveways and sidewalks in the Houston area, is among those who don’t see pay as the issue. He sees the answer in more recruitment and training to bring young people into the industry, rather than trying to lure back workers who left.

“One thing we’re noticing here in the Houston market is that the workers from Mexico are not coming back,” Mr. Weatherford said. “There is work in Mexico. They’ve opened plants in Mexico. Look how many car manufacturers have moved to Mexico. They can work there, and if they’re making a living, they’d all rather be home.”

In the Denver market, John Van Dyk’s Van Dyk Construction Inc. builds frames for about 700 homes each year. He agreed that Mexican-born construction workers are finding work outside of the U.S., but he added that there are still some who would return.

“Supposedly, there’s work farther south, in South America, Honduras and places like that that aren’t as hard to get to,” Mr. Van Dyk said. “I still feel like there is labor there that is willing to come here if we got immigration [policy] figured out. Most of my guys who are immigrants tell me that they could get labor if they were allowed.”

Immigration policy is a hotly debated topic among presidential candidates with the election still more than a year away. In their report, Messrs. Burns and Porter steered clear of suggesting any changes to immigration policy. Rather, their report cites numerous data points indicating a less hospitable environment in the U.S. in recent years for Mexican migration, legal or illegal.

Their report notes Commerce Department figures showing a 67% decline in immigration to the U.S. from Mexico from 2006 to 2013. Employers’ use of the E-Verify online system for verifying employment eligibility has risen from almost nothing in 2001 to more than 27 million employment checks last year.

Meanwhile, employment of U.S. residential specialty trade contractors, which account for most home-construction labor, stands at nearly 1.8 million workers. That’s nearly 28% less than at the home-building market’s peak in 2006.