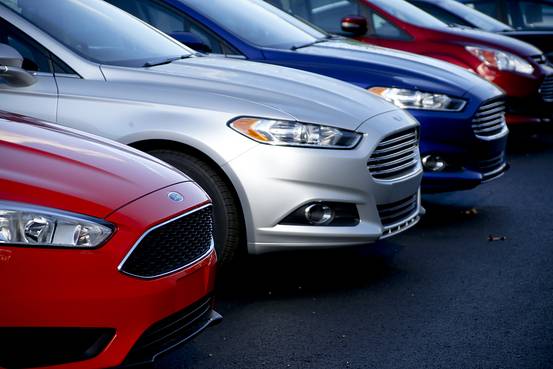 What goes up usually comes down.

Record auto sales in 2015 lent a big boost to overall economic output, but Americans’ appetite for autos and trucks is falling from those highs. That slowdown hurt GDP in the fourth quarter, and it’s set to dent first-quarter output, too.

Conditions that superfueled the boom may now be cooling: There had been a lot of old cars on the road, Mr. Blitz said, and cheap financing plus many Americans’ more optimistic view of the economy prompted drivers to replace their vehicles.

In the December quarter, Americans still bought autos and trucks at a healthy pace, noted Bernard Baumohl, chief global economist at the Economic Outlook Group. But real spending on motor vehicles and parts fell a seasonally adjusted $5.2 billion—wiping 0.58 percentage point off fourth-quarter GDP after adding about a percentage point to output over the first three quarters of the year. Excluding motor vehicle output, the Commerce Department said GDP rose 1.3% in the fourth quarter.

Because of the seasonal factor, it’s not unusual for the category to be weak in the final quarter of the year. But this time it’s more meaningful because of the unseasonably warm winter. Bad weather didn’t keep people from dealers’ lots like it sometimes does. And the decline was steeper than in prior—and colder—fourth quarters.

What’s more, some indicators suggest the slowdown will continue. The fourth-quarter decline came as the inventories-to-sales ratio was at its highest during the current business cycle, according to Mr. Blitz, potentially signaling a pullback in auto manufacturing as dealers try to clear some inventory.

And there was evidence on Tuesday that vehicle sales were more modest in January. General Motors reported a 0.5% increase in sales last month, while Ford said sales fell 2.8% from a year earlier. That’s after overall auto sales rose 14% in January 2015 from a year earlier as the major dealers posted double-digit increases. Auto makers pointed to fewer selling days last month and heavy snow in the east, and, to be sure, sales were still solid. But “headwinds remain to be fought,” said Kelley Blue Book analyst Jack Nerad.

Spending on motor vehicles is just one chunk of personal consumption, but it’s been a sizable slice that has helped offset weakness in other areas, like trade and capital spending. An upshot, according to Mr. Baumohl, is that spending on big-ticket items often depresses other forms of discretionary spending. For his part, Mr. Baumohl is confident the American consumer will continue to support the economy. “Consumers remain in charge,” he said. He still expects 3% growth this year.

But not everyone is so optimistic. “It is starting to seem that [the first quarter] may not look all that different than the fourth quarter of 2015],” said Richard Moody, chief economist at Regions Financial Corp. “The net result will likely be another quarter of the same 2 to 2.5% we’ve come to know but not necessarily love since the end of the 2007-09 recession.”

Mizuho Securities chief U.S. economist Steven Ricchiuto warns if auto sales no longer outpace overall retail sales, that would have important ramifications for economic growth in the first half of the year. So far, they are “they are weak but not terrible,” he said, underpinning his expectations for a first-quarter growth rate below 2%.

Turmoil in the Oil Patch Is Hitting U.S. GDP Growth

Why the Manufacturing Contraction Might Not Signal a Recession

U.S. Growth May Struggle to Find Support From the Third Quarter’s Strongest Industries