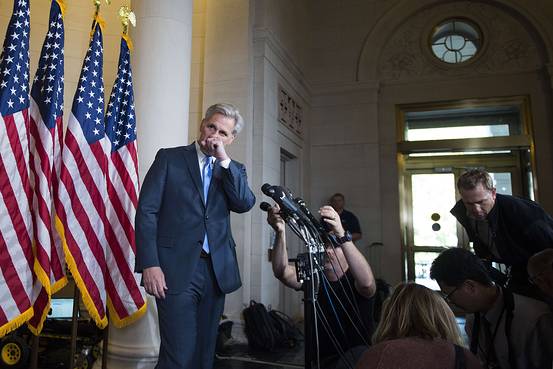 House Majority Leader Kevin McCarthy (R-Calif.) prepares to speak to the press Oct. 8 after dropping out of the race for speaker. House disarray delayed a vote on a little-known Census survey that feeds major economic reports.
JIM WATSON/AFP/GETTY IMAGES

A legislative delay may cause a key government economic survey to be scrapped for the quarter, depriving a half dozen agencies, including the Commerce Department and Federal Reserve, of data that they use to build some of the nation’s main economic indicators, including the gross domestic product and the nation’s flow of funds.

At the heart of this potential mishap is a little known and uncontroversial program from the Census Bureau that surveys U.S. businesses. The survey required reauthorization at the end of September, but with lawmakers confronting a potential government shutdown and disarray in the House of Representatives, the required legislation to keep the survey alive floundered.

“The problem here is we’re at a pretty critical juncture for the economy,” said Steve Landefeld, the former director of the Bureau of Economic Analysis, the agency charged with, among other things, producing the GDP report. “If you’re the Federal Reserve Board or any type of policy makers, the economic outlook is pretty unclear right now.”

Few have ever heard of the survey, known as the Quarterly Financial Report program, because it collects data from companies, not households. And the report, though it is released by itself, is not closely followed by financial markets or the media. The report’s importance comes because it’s used to build other key reports that are widely followed: measures of gross domestic income, corporate profits and the Federal Reserve’s financial accounts of the U.S.

Mr. Landefeld said that “it’s getting very late in the process” to still complete this quarter’s report, and that at some point it won’t be possible to revive the process, leaving a missing quarter in the data. That could be as early as the next week, he said. “This is a critical period for a whole quarter’s worth of data.’

Michael Cook, the Census Bureau’s chief public information officer, declined to comment on whether the bureau would be unable to complete the survey if reauthorization came too late.

“We regret any inconvenience this may have caused and we will keep the public notified if the status changes,” the Census Bureau said in a statement.

A disruption to the report means, for example, that the Fed could be debating whether to raise interest rates for the first time in nearly a decade, using reports with a giant asterisk. And all because of a legislative hiccup, underscoring the sort of repercussions facing the U.S. from congressional discord.

“This isn’t a question of a dispute over whether the data should be collected,” said Dan Newlon, the director of government relations for the American Economic Association. “Nobody in Congress thinks the data shouldn’t be collected. It’s a question of Congress getting its act together, as best I can understand, and authorizing an essential survey.”

The House passed the bill reauthorizing the survey on Sept. 24 by an uncontroversial voice vote. The Senate also passed the bill with unanimous consent on Oct. 6, but that version added a requirement that the Census Bureau produce a report on its cybersecurity practices. By then the House of Representatives was in disarray because Speaker of the House John Boehner (R., Ohio) had announced he would resign. Just two days after the Senate vote, Kevin McCarthy (R., Calif.) the leading candidate to succeed Mr. Boehner, withdrew from consideration. The necessary votes to reconcile the two measures did not get scheduled before the House went into recess for the Columbus Day holiday.

Despite budget pressures in Congress, the report’s funding is intact. The Census Bureau just lacks legal authority to use the funds for this survey—about $5 million a year, according to the Congressional Budget Office.

“This is symptomatic of larger dysfunction in Congress, not so much malice,” said Andrew Reamer, a professor at George Washington University who advises the federal statistical system. “Nobody is paying attention.”

As of Oct. 1, the Census Bureau has ceased collecting data on the survey. The House comes back into session on Oct. 20 and the Census Bureau could resume collecting data as soon as the survey passes. But the House has a packed agenda of crucial items—the U.S. Treasury is poised to run out of room to maneuver on the debt ceiling in less than a month—and at some point, the quality of the survey could be too low to publish.

A number of economic reports were delayed when the government shut down in 2013. With a delay of just two weeks, many economic indicators were produced with a delay and an asterisk, noting that this blackout period had lowered the response rates to surveys and thus lessened the reliability of the data. The current blackout period at Census is poised to stretch longer.

What’s an Economist to Do Without Government Data?