A big demographic shift could finally deliver income growth that U.S. workers have been waiting for, according to an analysis from a home-builder consulting firm published Wednesday.

The U.S. labor pool, defined as residents between ages 20 and 64, is growing at a slower pace this year, and will soon increase just 25% as fast as it has historically, says Chris Porter, chief demographer at John Burns Real Estate Consulting in Irvine, Calif.

The upshot is that, as the pool shrinks, employers are “finally going to have to compete for talent, and that will ultimately result in household incomes that are finally going to rise,” he says. 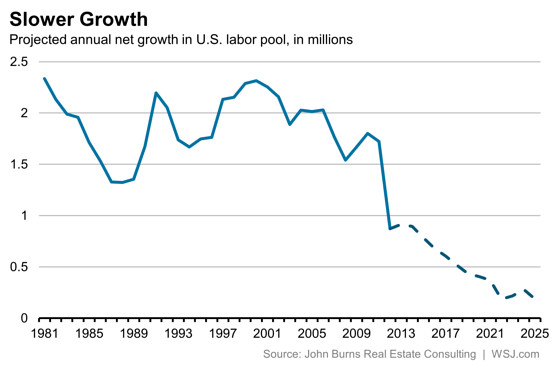 For the last 30 years, the U.S. has added around 1.8 million eligible workers to the labor pool each year, with around 4.3 million new entrants from those turning 20 years old and around 2.5 million exiting as they turn 65. But in 2012, the labor pool grew by just 900,000, as the number of retirees jumped and unemployment began to fall. And over the next decade, that growth will slow further, to a paltry 200,000 by 2022, estimates Mr. Porter.

So far, the decline in unemployment has done little for wage growth when compared to past recoveries. Since the recession, wage growth is running a little higher than 2% a year, which is low by historical measures. Federal Reserve Chairwoman Janet Yellen has argued there’s still substantial slack in the economy, which has held down inflation but also made it harder for workers to push for higher wages.

What ultimately happens to the millions of Americans who want full-time work but gave up looking or are in part-time jobs is the subject of intense debate. Some bullish forecasters have argued that the unemployment rate, which stood at 6.3% in May, overstates the supply of available workers because many of these are long-term unemployed who aren’t competing at the same level as the short-term unemployed. A more bearish view says these long-term unemployed workers would come back to the market if labor-market conditions are tighter, putting downward pressure on wages.

Mr. Porter’s analysis suggests slack should tighten up over the long run, even if the economy doesn’t post the kind of off-the-charts growth many would love to see.

His analysis makes a few assumptions about immigration and retirement.  He uses a baseline forecast on immigration from the Census Bureau; more robust immigration would boost the potential labor pool somewhat but wouldn’t significantly alter the underlying slowdown in its growth rate.

The same goes for retirement. Yes, older Americans could stay in the workforce longer than they have in the past, but “all it does is delay the inevitable,” Mr. Porter says. Even then, he says, “The underemployed and those who dropped out of the labor force will find it much easier to return to work.” 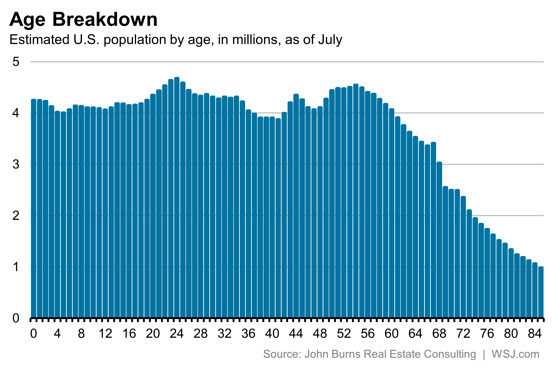 The bottom line, he says, is that if the U.S. continues to add 2 million jobs a year and the inflow of new potential workers drops below 1 million, labor demand will outstrip supply, pushing up wages.