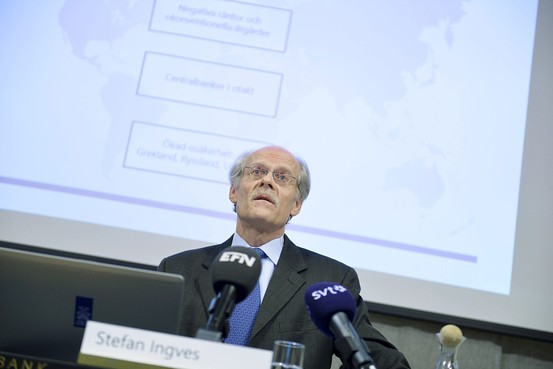 Several central banks in Europe have ventured past the frontier of conventional monetary policy by pushing some of their policy rates below zero.

This raises two interesting questions. First, how is this  possible? And second, will it work?

It has long been said that interest rates cannot go below zero because people will simply hold physical currency rather than incur a charge for leaving money in the bank. But the “zero bound” was never really zero for the simple fact that money is a pain to store and to use. As David Beckworth, who blogs at Macro and Other Market Musings, notes, what we are really interested in is the effective lower bound: the true level below which interest rates cannot go. That number is probably negative, but how negative?

Evan Soltas, who blogs at economics & thought, says people seem willing to tolerate credit card and related fees of around 2%, and reckons people would tolerate negative interest rates of 3% before switching to cash. The European Central Bank puts the total economic cost of cash at 2.3%  of the face value of transactions.

True, much of those costs are borne by retailers or intermediaries, not households. But even households must cope with the time spent visiting the ATM and making sure they aren’t robbed. The time Danish households spent using cash was worth an estimated 1.3 billion krone (about $200 million) in 2009,  about 0.3% of GDP. The relative inconvenience of cash has grown as electronic alternatives have become ever more ubiquitous and frictionless.

But Paul Krugman at the New York Times points out that convenience is only one of the factors that people consider in weighing whether to hold cash or bonds (or bank deposits, or anything that pays interest). The other is that it’s a store of value. Cash is pretty inferior as a store of value when bank deposits pay positive interest, but clearly superior when they pay negative interest; a zero rate of return is clearly better than negative. Thus, he says, convenience is irrelevant for people who hold as money as wealth rather than for spending.

All true, but even those who hold currency as wealth must consider the hassles if they opted for paper currency. Big investors, corporations, banks and governments hold hundreds of millions of dollars, even billions, as cash.

Even when these people aren’t spending cash, they’re using it to settle huge sums with each over night to facilitate trillions of dollars in payments. Keeping this money in the form of deposits or bonds makes transacting these sums relatively easy thanks to a complex, well-developed payments and settlement infrastructure. An alternative system based on physical currency would require setting up storage houses of currency and shuttling large mounds of it between them.

This is clearly feasible. A century ago, the world’s central banks settled gold payments among themselves by moving ingots from one vault below the Federal Reserve Bank of New York to another. It’s not hard to imagine a clever financial innovator buying up a billion Swiss francs in currency, putting it in a storage house, and selling depository receipts that could then become a tradeable instrument, much like money market mutual fund shares. To make the considerable upfront costs of such a parallel payments system worthwhile would require interest rates to be both negative enough, and to stay negative for long enough.

Here, it’s important to note that while the headline interest rates central banks have established can be quite negative, it is not always indicative of what is being charged. When Sweden’s Riksbank lowered its excess deposit rate to minus .85%, for example, it also reintroduced a “fine-tuning corridor,” which keeps the deposit rate between minus 0.1% and minus 0.2%. Banks with excess cash can lend it back to the Riksbank each week at minus 0.1% or minus 0.2% each night; only cash not mopped up in these nightly operations is charged the minus 0.85%, which in practice is a trivial sum. By contrast, the minus 0.2% deposit rate charged by the ECB really does affect very large balances. 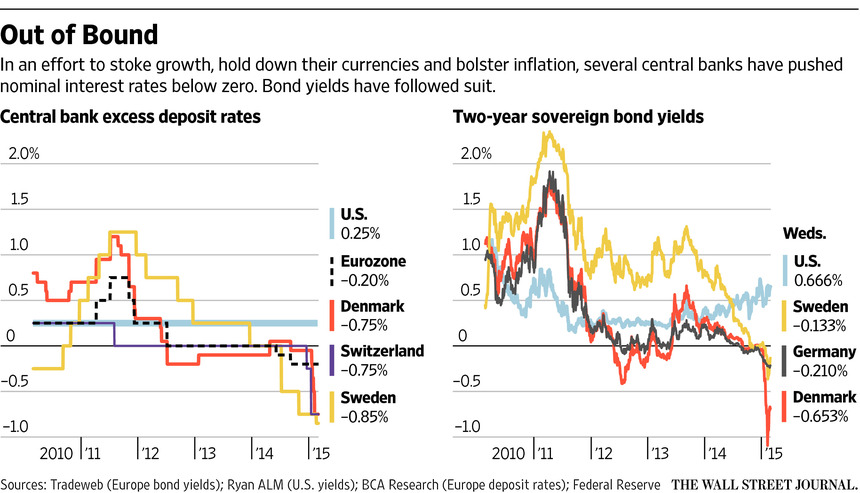 Another important difference between countries is the holders of its currency.  Swedish and Danish currency is primarily held and used by residents; very little circulates abroad. Neither country is a financial center. By contrast, a large portion of American, euro and Swiss currency is held by foreigners, often because they don’t trust the local financial system, but also to facilitate underground transactions. All are home to financial centers. Foreigners trying to decide between cash and bank deposits probably care less about the inconvenience of banknotes since they don’t use them that often. This could explain why Swiss currency in circulation has risen 27% since 2010, to 66 billion francs.

Central banks’ purchases of bonds and foreign exchange with newly created money has left banks with trillions of excess reserves on deposit at their central banks, and these are like a hot potato: A bank can get rid of its deposits only by forcing another bank to hold more (the same is true of efforts by banks such as J.P. Morgan Chase to shed unprofitable deposits).

So even if some of this gets converted to cash, negative interest rates can still be effective so long as most isn’t. (Deposits at the Swiss National Bank soared 10-fold since 2010, to 385 billion francs, as the SNB printed francs to buy euros in an effort to keep the franc pegged to the euro.)

Like Switzerland, Denmark has sought to keep its currency from rising against the euro, in part through purchasing euros with newly printed krone. After the ECB introduced negative rates and promised to buy bonds, euro bond yields fell into negative territory and money flooded into both Switzerland and Denmark in search of less-negative returns. Switzerland surrendered and let the franc appreciate, but then introduce a negative interest rate, which is probably why, after initially skyrocketing more than 15% against the euro, the franc has retraced much of that climb. Inflows into Denmark similarly slowed substantially after it introduced its minus .75% deposit rate, and its currency peg has held.

So negative rates can be quite effective, at least insofar as they are aimed at altering financial market behavior. Europe’s negative rates are an important reason Italy and Spain are now paying just 1.3% on long-term bonds, and why European stocks are up  20% since the Greek election.

Less certain is whether they can also revive the real economy, that is persuade businesses to invest and consumers to spend. There, pushing interest rates into modestly negative territory is, in theory, no more stimulative than a similar-sized cut that left them in positive territory. It helps at the margin, though not by much. Yet it would be wrong to underestimate the potential impact. Peter Berezin of BCA Research notes that people have a psychological aversion to loss, and the prospect of losing money on a super-safe deposit or government bond may have a more powerful effect than a modestly lower, but still positive, interest rate.

Christina Romer and David Romer have written a paper called, “The Most Dangerous Idea in Federal Reserve History: Monetary Policy Doesn’t Matter.” The same sentiment can be applied to Europe. It is probably not a coincidence that the European economic data have begun to brighten, just as the ECB has ventured more resolutely into uncharted territory. It may be true that rates can’t go much more negative than they have; but they may not have to.