How Much is the U.S. Worth? Economist Values the Land Alone at $23 Trillion – Real Time Economics 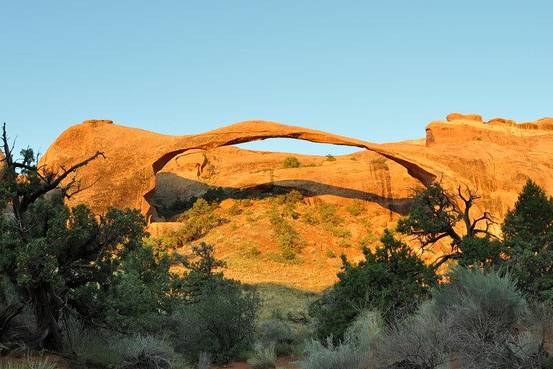 All the land in the United States, including Landscape Arch in Utah’s Arches National Park, is worth an estimated $23 trillion, according to a new report.
Sarah Portlock/The Wall Street Journal

Americans tend to have a good handle on how much their house is worth. But what about the land it sits on? Or all the land in their state?

Or, heck, how much is the continental U.S. really worth? A government economist puts that figure, from sea to shining sea, at $22.98 trillion.

That’s William Larson’s estimate for the value of the 1.89 billion acres of land that accounts for the 48 contiguous states and the District of Columbia. The dollar figure—equal to about 1.4 times last year’s gross domestic product–represents only the value of the land, and not buildings, roads or other improvements, and excludes bodies of water.

He also determined values for every state. California is worth the most at $3.9 trillion and Vermont is worth the least at a paltry $44 billion. On a per acre basis, New Jersey has the most valuable land at $196.41 an acre and Wyoming the least, $1.56 an acre.

Mr. Larson’s estimates, released this month in a paper from the Commerce Department’s Bureau of Economic Analysis, aren’t meant to be a definitive measure. Rather they attempt to provide baseline methods and estimates upon which further research can draw. His estimates reflect the land’s value in 2009. Therefore it shows a post-recession figure (he says country’s value fell 24% from 2006 to 2009) and doesn’t account for the changes in value due to the shale-gas activity in the Midwest and elsewhere.

But with those caveats the paper reveals some interesting findings:

Determining the value of land in the U.S. is more difficult than it might seem.

Developed land is typically sold in a bundle with buildings or structural improvements, and it can be difficult to disentangle the two.

Undeveloped land in rural areas can be even trickier to price because it’s not often bought and sold . For some federal land acquired in the Louisiana Purchase, the last transaction was in 1803, when the seller was a fellow named Napoleon.

“Land has long been recognized as a primary input in production and as a store of wealth,” wrote Mr. Larson, an economist at the Federal Housing Finance Agency. “Despite its fundamental role in nearly all economic activity, there is no current and complete estimate of the value of the land area of the United States.”

To calculate the value, Mr. Larson used satellite images to determine each type of land, including farms, forests and developments.

For undeveloped land he used comparable farm-land values to estimate prices. For developed land, he relied on estimates of land quality, home values and property attributes within a given Census tract. Based on his methods, Mr. Larson believes his values are correct within a 10% margin of error.

See how much the land in your state is worth:

Of More Than 3,000 U.S. Counties, Just 65 Have Recovered From Recession, NACo Says