How Much Will the Paris Climate Deal Cost the U.S.? – Real Time Economics 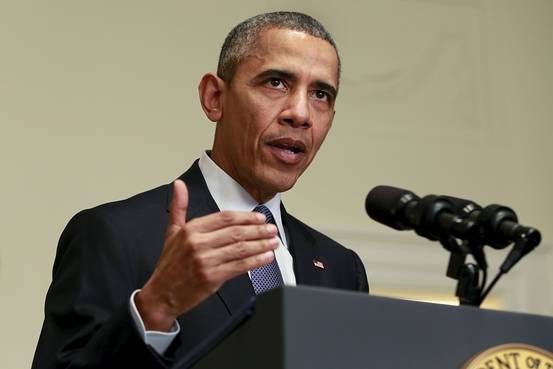 President Barack Obama delivers a statement on the climate agreement at the White House on Saturday.
YURI GRIPAS/REUTERS

Now that officials from the U.S. and nearly 200 other countries have reached a deal in Paris meant to keep global warming at bay, many citizens back home want to know—how much will it cost us?

No one knows for sure, but one estimate from an environmental think tank in Washington pegs the cost as a $170 billion hit to U.S. gross domestic product in 2030, or about 0.7% of the total economic output that year.

“You don’t collapse an economy by switching to cleaner fuels,” said Karl Hausker, senior fellow at the World Resources Institute, which published the estimate. “Every time the business community has rung warnings bells, and frankly the economy keeps going.”

The idea behind the Paris talks is that all countries have to participate in a United Nations-organized effort to curb emissions of greenhouse gases linked to global warming. To get everyone on board, each country was allowed to develop its own plan, and countries aren’t compelled to meet their targets, which cover the period after 2020.

Few political leaders are interested in ordering up deep, painful cuts to emissions in ways that could unleash high electricity prices, stunt industrial growth or prevent impoverished citizens from clawing their way into the middle class.

So most countries, under pressure from peers as well as domestic critics, settled on cuts likely to cause small to moderate economic pain in the medium term, with the potential for big benefits in the longer term if all the major economies comply and humankind keeps the effects of climate change at bay.

The U.S. pledge is built around President Barack Obama’s “clean power plan,” which focuses on steep reductions in carbon dioxide emissions from the electricity sector—mainly coal. The U.S. government estimates the impact of the power rule—issued by the Environmental Protection Agency—at between $28 billion and $39 billion in 2030, or 0.1% to 0.2% of projected GDP.

If the power-plant rule survives court challenges, it could weigh on coal-related jobs, but the U.S. Energy Information Administration’s economic model finds no appreciable effect on overall employment.

Besides the power-plant rules, the U.S. pledge in the Paris accord relies on regulations mandating more-efficient automobiles and trucks, plus other efforts to stem greenhouse-gas emissions.

In May, the World Resources Institute constructed an economic model that shows the effect of the overall target that the U.S. submitted in Paris, although without the final details of how it’s achieved.

That projection resulted in the $170 billion hit to GDP in 2030, not considering the potential gains from better public health or an improved climate. By 2040, the impact on GDP would decrease significantly, Mr. Hausker said.

The impact over 15 years is small enough to be easily overshadowed by other economic factors, especially energy prices. Persistently low energy prices would likely increase the relative cost of switching to wind, solar or other forms of renewable energy.

On the other hand, lower natural-gas prices in the U.S. are already encouraging an energy shift that reduces U.S. emissions, since burning gas releases less carbon dioxide than coal and oil with the same energy content.

5 Things to Know About the Paris Climate Deal

The IMF Is Pushing for Carbon Taxes, But at What Price?