How Much Will Workers Get Done Between Christmas and New Year’s? – Real Time Economics 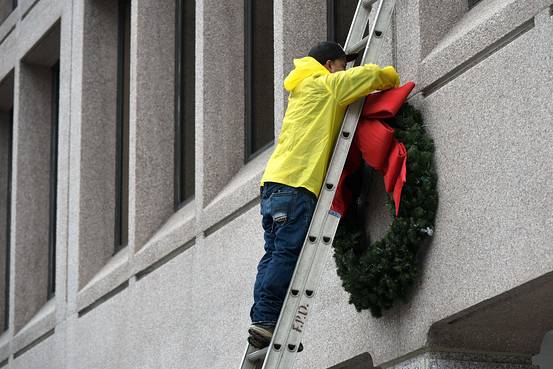 A worker hangs a Christmas wreath on an office building in Washington, D.C., last month. Only 27% of office workers in a recent survey said they would be “very productive” between Christmas and New Year’s.
MANDEL NGAN/AFP/GETTY IMAGES

Most office workers plan to show up at the office between Christmas and New Year’s.

How much they accomplish may be another story.

A recent survey by Robert Half, a staffing service, found that 59% of office workers plan to be at their desks at least part of the week of Dec. 28. About 79% of those expect to be productive—even if only “somewhat.” That leaves more than one-fifth looking at the clock instead of spreadsheets:

If you are working part/all of the week, how productive do you think you’ll be?

An independent research firm surveyed more than 1,000 workers employed in office environments on behalf of Robert Half for the study.

“There is tendency for some, especially if the manager or supervisor is away, to let off a little bit,” said Paul McDonald, senior executive director at Robert Half. “So, I’m not surprised by the survey. I am encouraged by the 79%.”

Indeed, many of those at the office will be hard at work. Mr. McDonald said for many companies, the end of the year creates deadline pressure to complete projects, meet goals, spend money left in the budget and prepare for the next year.

And much of the staff not clocking in at the office will still be electronically tethered to work.

“A lot of productivity is going to happen that week,” Mr. McDonald said.

Why Markets Aren’t in the Holiday Spirit