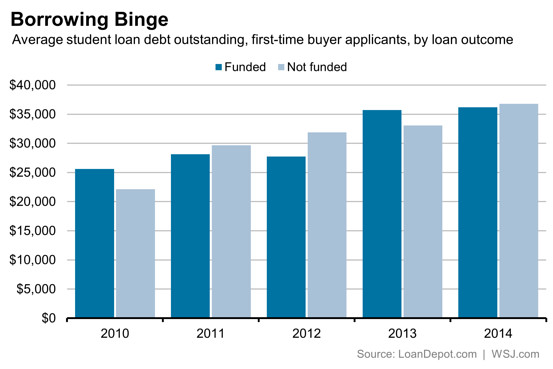 One of the biggest fears today in the real-estate industry goes something like this: Rising student debt is going to freeze millennials out of the housing market.

Data from a top national lender shows that loan applicants with student loans aren’t being turned down more often than those without debt. But the data also show that even small changes in the size of a loan applicant’s monthly debt payments can make a big difference in whether a loan gets approved.

The Wall Street Journal received data from LoanDepot.com, a nonbank mortgage lender that started up five years ago and recently cracked into the top 30 mortgage lenders, as tracked by Inside Mortgage Finance. LoanDepot provided data for nearly 46,000 loan applications for home purchases that it processed since 2010 for first-time home buyers. Of those loan applications, more than three quarters were approved and funded.

The data, of course, is limited only to those who want to buy homes. There’s no way to measure how many borrowers with student loans have deferred plans to buy homes.

The loan-application data show clear signs of growing student-debt burdens. Through the first half of this year, applicants with student debt carried more than $35,000 in student loans. But there is very little difference in total debt burdens between the funded and not-funded pools.

A key metric that mortgage underwriters use to evaluate a borrowers’ ability to repay a loan is their total debt-to-income ratio, and it’s this metric that can make student loans a big negative in the loan approval process. New rules that took effect this year give lenders greater legal liability if they don’t properly verify a borrower’s ability to repay a mortgage. Those rules give a greater legal shield to lenders if they verify a borrower’s total debt-to-income ratio is no greater than 43%, which means borrowers with total debt that exceeds 43% of their income could put them at greater risk of being denied. 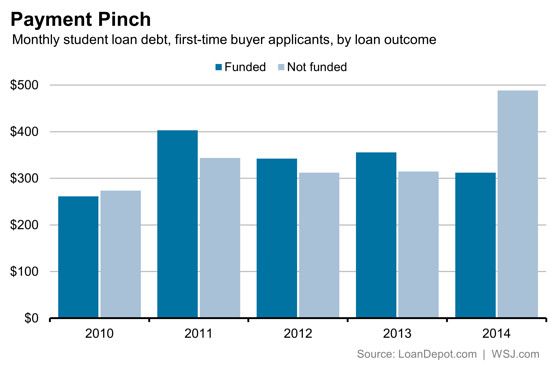 “Between the approved universe and the denied universe, the [borrower’s] credit is the same. The fundamental difference is a few hundred dollars in student loan debt that pushed the debt-to-income above the approved threshold,” said Anthony Hsieh, the chief executive of LoanDepot.com.

These numbers mirror the concerns of some housing analysts, who say that young adults often don’t realize how signing up for thousands of dollars of student debt could hurt their ability to borrow later. “The continual feedback that I hear from the millennials is, ‘I had no idea what I signed up for and what this meant,” said Mollie Carmichael, a principal at John Burns Real Estate Consulting, at a conference last month.

To be sure, the discrepancy in monthly student loan payments between funded and not-funded loans exists only for more recent applicants. The LoanDepot data set shows that this wasn’t an issue for loans from 2011 to 2013.

“We’re a slave to the model,” says Mr. Hsieh. Lenders throw the borrowers’ credit and income information in “and see what comes back out.” The upshot, he says, is that homeownership rates will face pressure until student borrowing slows or until mortgage investors and lenders come up with either more flexible underwriting tools or new loan products.