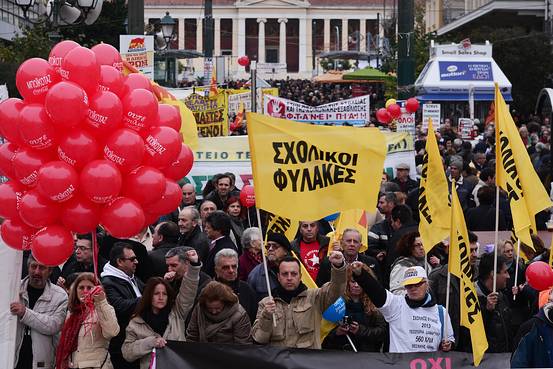 The U.S. isn’t the only country where collective bargaining has come under pressure. The global financial crisis put a widespread dent on it in recent years, a new analysis of 48 countries shows.

Between 2008 and 2013, the share of employees covered by collective-bargaining agreements fell an average of 4.6% in the 48 countries assessed, while union density dropped an average 2.3%, according to the International Labor Organization study. The decline, which follows a longer-term slide in union membership rates in many countries, reflects a variety of factors. Legislation allowed some financially troubled companies to opt out of their bargaining agreements. The recession also made it more difficult to renew existing pacts. Meanwhile, some governments made it harder to negotiate national and sector-wide agreements reached by union federations and employer groups, favoring company-level pacts instead.

The study makes the case that wage inequality is rising, so public policies are needed to shore up collective bargaining and make it more inclusive. It says that bargaining coverage varies widely across a broader group of 75 countries, ranging from one or two percent of employees in Malaysia and Ethiopia to nearly 100% in Belgium and France. While promoters of collective bargaining say it can help protect workers and provide some stability for employers,  some employer groups say it can lock their members into inflexible commitments that make it hard to weather economic downturns.

The ILO argues, instead, that governments should be at the forefront of promoting collective bargaining.

“Collective bargaining can play a key role in translating productivity growth into higher wages,” said Susan Hayter, one of the study’s authors.

In the U.S., where bargaining coverage is 11.9%—about the same as in Mexico and the Republic of Korea—President Barack Obama and the labor secretary have been pushing collective bargaining and unions as a way to raise wages and strengthen the middle class. They’ve also made a causal link between falling union membership and rising inequality and cite Labor Department statistics showing unionized workers earn more on average than nonunion workers.

At a White House summit this month aimed at exploring how U.S. workers can raise their voices on the job, Mr. Obama said America’s collective-bargaining laws have made it too hard to unionize. He echoed union officials who are pushing a bill that would impose stiffer penalties on U.S. employers who retaliate against workers for exercising their collective rights.

In a handful of countries the coverage remained stable, including Belgium and France. Factors the study cited for this group: Collective bargaining agreements were easier to extend and bargaining was used as a key way to respond to the financial crisis, such as through “job saving” agreements.

Ten of the 48 countries saw their bargaining coverage increase. Bargaining was expanded in the Netherlands to cover more sectors and in Brazil employment growth was a factor.

Of course, in some countries bargaining coverage eroded well before 2008, such as in Germany when the East and West unified in 1990, the study said. The U.S. has likewise seen a decadeslong decline as many private-sector manufacturing union jobs have gone overseas or become nonunion.

U.S. union officials say they have a reason to be upbeat. A recent AFL-CIO study said most of the country’s largest organized workforces are bargaining contracts this year and next, which it expects will result in more workers seeking raises through collective bargaining than at any other point in recent labor history.

How Unions May Target Hispanic Wage Gap to Revive Membership

What Happened to Unions in the Midwest?