How to Live Past 100, According to Centenarians

Want to live to 100? Doctors will tell you to stay active and eat loads of fruits and veggies. But these centenarians have a few extra tricks up their sleeves.

“Make sure it is red wine and drink it once a day,” she told ABC News affiliate WVII-TV in Bangor, Maine. “Yes, that’s a good drink for you.”

Pearl Cantrell of San Saba County, Texas, lived to 105 eating a plate of bacon and some “coffee pudding” every morning, according to her son, Billy Allen.

Coffee pudding is coffee made with plenty of sugar, milk and biscuits, Allen told ABC News on his mom’s birthday last year.

But some centenarians stick to their doctor’s advice. Florida resident Francis Smith celebrated turning 106 with an hour-long workout, according to WINK-TV in Naples, Florida. Smith started going to the gym on doctors’ orders at the age of 100.

Those who make it to the age 110 get a special title: supercentenarian.

In Detroit, the oldest American citizen and supercentenarian Jeralean Talley credited religion and God after turning 115.

“A long time ago, I asked the good Lord, when you get ready to take me home…I don’t want to be sick,” Talley told ABC News affiliate WXYZ-TV in Detroit. “So far I don’t suffer so much.” 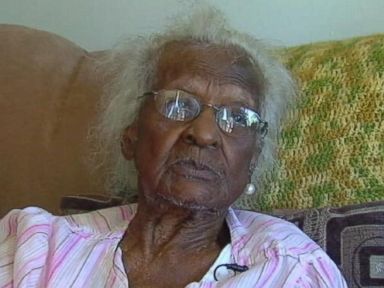 PHOTO: Jeralean Talley, 115, also known as the oldest person in America, celebrated her birthday yesterday at her home in Inkster, Mich.

While the advice of Talley, Cloiter and Cantrell might be fun to try, scientists are still searching for clues to explain why a lucky few can make it far past age 100. Research into “Blue Zones,” places with higher rates of centenarians, have revealed some common characteristics between the areas.

“The problem is we keep looking for is a silver bullet,” Dan Buettner, author of “The Blue Zones” told ABC News last year. “The answer is silver buckshot.”

Buettner found that these regions with higher rates of centenarians tend to feature moderated diets, active seniors and a sense of community and inclusion for seniors. But Buettner said there’s one more thing that unites the super old: a good personality.

“Every main principle investigator [of a centenarian study] will say it’s hard to measure likability, but the grumps seem to die out,” said Buettner.