A big question at the beginning of the year was whether this would finally be the year housing contributed in a big way to economic growth. The answer so far: Nope.

The good news is that the housing market wasn’t as much of a drag on the economy during the second quarter, according to last week’s report on gross domestic product from the Commerce Department.

Economists are closely watching residential investment because it has been so weak for so long. It probably needs to kick into higher gear if the economy is going to hit the 3% annual growth forecast that many economists have anticipated.

Last week’s report offered five insights about the state of the housing market: 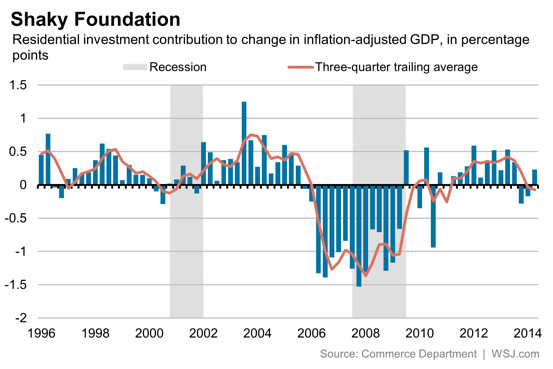 Second, almost all of the declines in residential investment in the October-March period of the past year came from a drop in brokers’ commissions. Home construction slowed its pace of growth, but it didn’t actually contract. 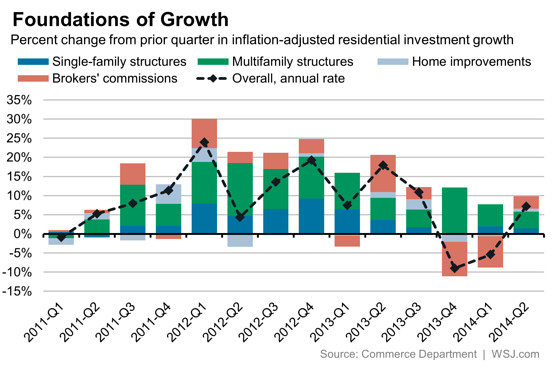 The drop in brokers’ commissions reflects the sharp drop in sales of previously owned homes that began last fall. New home sales, by contrast, have been a very small part of the overall market, and housing construction has been extremely low for years, which means it would be hard for it to fall any further and actually subtract from growth.

In fact, despite some hand-wringing over a new housing slowdown, single-family construction during the first quarter became the largest component of residential investment after 22 straight quarters in which home improvement had been on top. 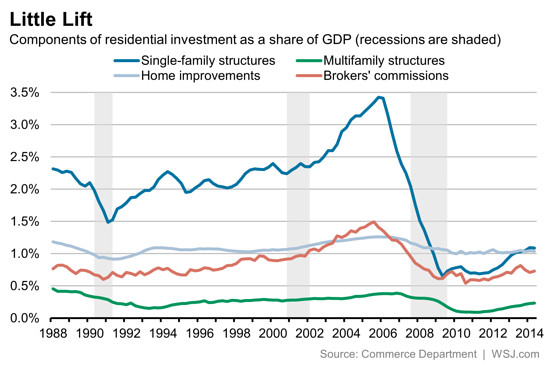 Third, the residential investment contribution to GDP remained at its highest level in six years during the second quarter, accounting for 3.2% of GDP. This is up from a low of 2.4% in 2010, but it is still well below the 4.5% average that prevailed in the last half of the 1990s, before the housing bubble inflated in earnest. 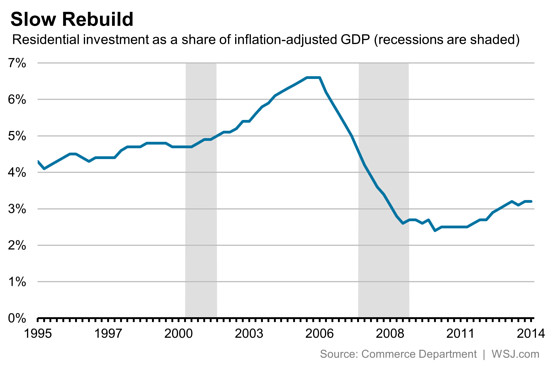 Fourth, housing normally plays a much bigger part in the first year or so of an economic expansion than it has during any part of the current recovery.

Consider: After the 2001 recession, housing’s contribution to GDP exceeded an average 0.5 percentage point in the first two quarters of 2002. Housing hasn’t put together two quarters of equivalent growth at any time since 2009, when the last recession officially ended.

This reflects the slowdown in housing activity that hit last summer, after rising home prices and a sharp jump in mortgage rates led to a slowdown in transactions. 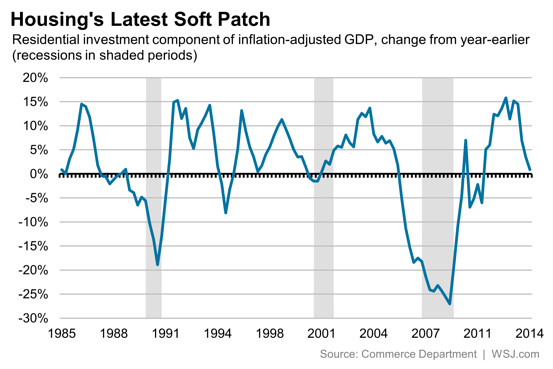 Looking back over the last 30 years, such a decline in year-over-year housing has often presaged a recession. Most economists don’t think the U.S. is entering a recession now, and so a better analogy here is probably 1994. That was the last time mortgage rates posted the type of swift, sudden jump that they did last year. After buyers and sellers had digested the rate increase, housing activity expanded again.