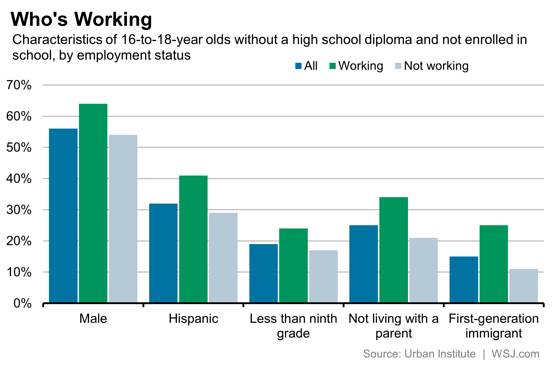 Working youth account for around 30% of 16-to-18 year olds who leave high school early, and they tend to be disproportionately male, Hispanic and first-generation immigrants, according to a new analysis by the Urban Institute.

On average, these young workers earn around $9,500 a year. While that kind of income puts them below the poverty line as a single worker, it accounts for a hefty share of their family income.

One in 10 young workers account for more than half of their family’s income, while the average young worker accounts for 21% of their household income. This is enough to lift 42% of poor households over the poverty line, and it allows 45% of households to spend less than 30% of their income on housing.

Half of all out-of-school working youth are working more than 40 hours a week, according to the analysis. And households with adolescent workers tend to rely less on federal assistance programs than those with youths who aren’t in school and aren’t working. 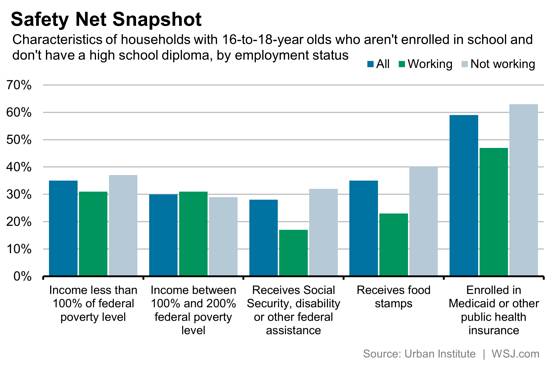 Do young people drop out of school to work because they don’t want to be in school, or because they really need the work? The study doesn’t answer the question, but the authors point to a survey of Latinos which found that seven in 10 stopped going to school—either before or after graduating from high school—to help support their families.

The reasons for dropping out are important because if more youth are dropping out due to financial necessity—and not because of behavioral or academic problems—then that requires a different policy response. “Economic problems have economic solutions,” writes Molly Scott, one of the study’s authors, in a blog post.

Earning a High-School Diploma Can Be Worth $9,000 a Year

U.S. Firms Put Teens To Work To Keep Them From Dropping Out of School

For More Than One Million Kids, Graduating High School is Followed by… Nothing

A College Education Still Pays For Itself, Fed Economists Say