The husband of an American health worker infected with Ebola said she is “improving” and headed “in the right direction” after contracting the deadly virus last month.

Nancy Writebol, 59, has been treated in a special isolation ward at the Emory University Hospital in Atlanta since arriving from Liberia on Aug. 5. Writebol was working as a hygienist in a ward treating Ebola patients in Monrovia, Liberia, when she became infected.

Writebol and another American doctor, Kent Brantly, were evacuated from Liberia to the U.S. for treatment after they were infected with the virus.

Writebol’s husband, David Writebol, told reporters today that his wife sounded “stronger,” when he talked to her on the phone. 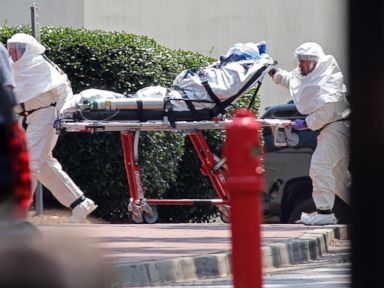 PHOTO: Nancy Writebol, an American aid worker from North Carolina who was infected with the Ebola virus while working in Liberia, arrives at Emory University Hospital in Atlanta, Aug. 5, 2014.

“Her voice is clearer and brighter. I’m imagining she’s getting stronger,” said David Writebol. “It’s moving in the right direction, Let’s say that. From everything I I’m hearing, we’re making good progress but we’re not ready to say she’s out of the woods yet.”

David Writebol was living with his wife in Liberia, where they worked with other missionaries from the U.S. aid organization SIM USA.

According to David Writebol, his wife worked in a decontamination role, including teaching proper techniques to health workers in the Ebola ward. There were “strict protocols” in place, David Writebol said, and it’s unclear how or when exactly his wife was exposed to the virus.

What’s Next for Experimental Ebola Drug?

David Writebol said after his wife was diagnosed and began to have serious symptoms he tried to comfort her, even through layers of protective gear.

“I patted her to let her know I was there and that I loved her,” he said.

David Writebol has been in isolation along with other SIM USA missionaries since arriving in the U.S. this week. David Writebol and anyone else possibly exposed to the virus will remain in quarantine until medical health officials determine they are not at risk for developing the virus. The incubation period for Ebola can last as long as approximately 21 days. The couple’s sons have been in Atlanta with their mother as she recovers from the virus.

When David Writebol’s quarantine is over, he told reporters, he plans on heading straight to Atlanta to see his wife. He may even get to hold her hand after weeks of being separated by quarantine and protective gear.

“It will be a great day when we get back together,” he said.

The Ebola virus has ravaged west Africa since March with 1,975 cases and 1,069 deaths. Liberia, along with Sierra Leone and Guinea, is one of the hardest hit countries with 670 cases and 355 deaths.

David Writebol said one of the hardest aspects of working with Ebola-infected patients in Africa was not the fear of being infected, but seeing the vulnerability of those he treated.

“One of the strongest feelings I remember and still somewhat carry is the helplessness,” said David Writebol. “It’s not a disease that has a cure. Helplessness is part of that. You do what you can, but it’s really not enough.”