The International Monetary Fund has plenty of advice for the Federal Reserve ahead of its policy meeting next Tuesday and Wednesday.

Fed officials are expected to continue discussions about what combination of interest-rate tools to use when they decide it’s time to raise borrowing costs across the economy, and the IMF this week offered a few suggestions.

To start, the IMF suggests the Fed should think twice before relegating its traditional policy tool, the federal funds rate, to a supporting role. Minutes of the Fed’s June meeting showed central bank officials agreed they will use a newer interest rate—the rate it pays banks to park their reserves at the central bank overnight—as their primary tool for raising short-term rates broadly.

The Fed has held the fed funds rate near zero since late 2008 in an effort to spur stronger growth. For more than two decades, the Fed has used this rate as its key benchmark. When it rose, so did other rates such as those on mortgages, credit cards and business loans. When it fell, other rates followed suit. But Fed officials now believe the fed funds rate won’t be as effective as in the past.

The IMF, however, urged the Fed to stick with the fed funds rate as its top tool.

“The fed funds rate should remain as the operational target during most (if not all) of the” period in which the Fed is raising rates, according to the IMF’s July country report for the United States. The IMF also says it might be a good idea to stick to a single interest rate rather than adopting a system based on several rates, including the rate on banks’ excess reserves and another experimental Fed rate on reverse repurchase agreements between the central bank and financial firms.

“There seems no clear benefit in moving away from the fed funds target, while there could be risks in doing so,” the report said.

The problem as the Fed sees it is that its own efforts to spur stronger growth have created an abundance—some $2.6 trillion—of excess bank reserves, and greatly reduced activity in the overnight in the fed funds market. 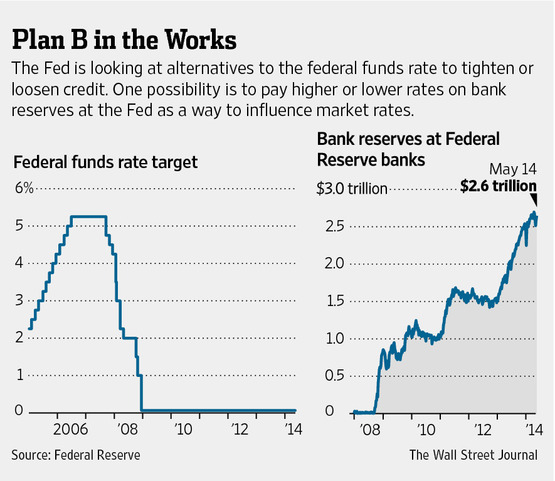 Fed funds daily trading activity fell from an estimated $250 billion in 2006 to just $60 billion at the end of 2012, according to the IMF. Fed officials believe this has weakened their power to control the fed funds rate and use it to influence borrowing costs more broadly.

The IMF didn’t explain why it believes the fed funds rate will be more effective than Fed officials think. But it said the Fed should “communicate clearly about the likely challenges of controlling the fed funds rate, suggesting that somewhat more volatility is possible, especially early on in the tightening cycle and given the uncertainty about the demand for its new tools.”