In 2014, an Improving Economy—and the Worst Traffic in Three Decades – Real Time Economics 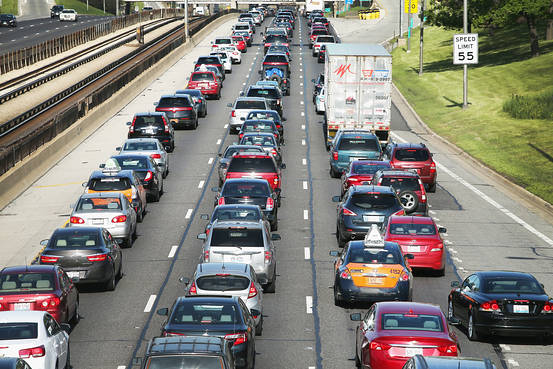 Traffic congestion has staged a comeback as the economy recovers from the 2007-09 recession, researchers at Texas A&M have found, a conclusion that will probably come as no surprise to harried urban commuters.

In a study set for release Wednesday, the university’s Texas Transportation Institute and Inrix, a data analysis firm, found traffic congestion was worse in 2014 than in any year since at least 1982. American commuters spent 42 hours each on average in traffic last year and wasted a total of 3.1 billion gallons of fuel, costing the economy $160 billion.

That’s a sharp increase from 2008 and 2009, when lost jobs kept people from commuting and cut down the overall amount of time spent in traffic.

“It follows the economic thread,” said Bill Eisele, a senior research engineer at TTI, who worked on the study. “There’s clearly this relationship that the higher congestion levels are a downside of this increase in economic activity.” The study’s travel time index—a ratio of travel times under peak conditions to travel times when traffic is free-flowing—also rose to a record last year. Inrix provided speed data “from a variety of sources every day of the year on almost every major road,” which the researchers combined with traffic volume statistics from the Federal Highway Administration, the report said.

The study, which the university updates every few years, has become a closely watched measure of congestion.

One variable that does not show up in the report is the recent drop in gas prices. That’s because the effect of fuel prices takes a long time to show in congestion data, said David Ellis, a research scientist at Texas A&M.

Fuel prices may make a difference to families planning their summer vacations, he said, but their impact is limited on work commutes and other necessary trips, such as ferrying children to and from school.

“When gasoline prices are down, it doesn’t necessarily mean that people say, ‘Oh, gosh, let’s get in the car and drive around.’ That’s not typically the reaction that people have,” he said.