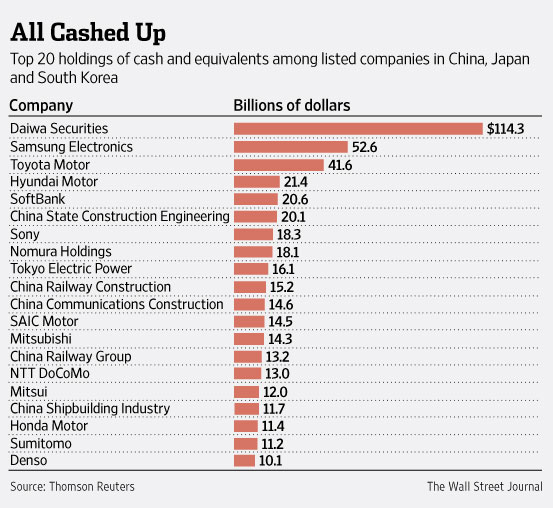 Investors have long criticized many of Asia’s corporate giants for hoarding billions of dollars. Now those cash piles are under attack from governments that want them put to better use driving economic growth.

Last month, Korea announced that as part of a $40 billion economic stimulus package, it would impose a tax on companies that keep piling up savings instead of paying them out to workers or shareholders.
In Japan, Prime Minister Shinzo Abe has pushed companies to raise payouts to shareholders and workers, and Beijing has ordered state-owned behemoths to boost their dividends to the government to help pay for expanded social-welfare programs.

The International Monetary Fund took aim at the issue this month in its latest report on Japan, calling on Friday for better corporate governance to help “unstash Japan’s corporate cash.” The IMF estimates Japanese companies are sitting on record amounts of cash, equivalent to more than 9% of gross domestic product.

The idea is that by unleashing these corporate cash lodes onto shareholders and employees, they will either invest it more profitably in other parts of the economy, or simply spend it – either of which is better for growth than having it sit in the bank.

The moves thus put policy makers in East Asia’s three largest economies in rare concert with investors who argue that companies such as Japan Tobacco and Samsung Electronics should return more of their earnings to shareholders, not only to boost returns, but so the money can be more efficiently invested elsewhere.

The shift not only stands to buoy the appeal of Asia’s largest stock markets to investors hungry for better returns. It could also herald an end to policy makers’ decades-long endorsement of high corporate savings. In the past, companies were encouraged to hold on to profits to reinvest them in new technology and in gaining a greater share of global markets. In turn, they would create jobs and build infrastructure for national development.

But as companies’ profits grew, such investments haven’t kept pace. Nomura estimates that between 1992 and 2010, for example, China’s corporate-savings rate roughly doubled, to 22% from 11.7%.

Such hoarding isn’t unique to Asia. Many U.S. firms also sit on cash, to the chagrin of activist investors like Carl Icahn and David Einhorn. But according to the IMF, their holdings are more proportional, at least compared with Japan. It estimates that between 2004 and 2012, U.S. cash holdings were less than 20% of overall U.S. market capitalization, compared with more than 40% in Japan, more than in any other member of the Group of Seven leading economies.

And while the average dividend in China of 3.3% compares favorably with the S&P500’s 2.3% annual payout, investors in Japan can only expect roughly 1.8% in dividend payments on stocks they hold, while in Korea companies pay an average of just 1.1%.

Shareholders generally don’t mind low dividend payments as long as the value of their shares are rising to compensate. But Japanese companies in the Topix index of all companies listed on the first section of the Tokyo Stock Exchange had an average return on equity of 6% from 2003 through 2013, compared with 13.6% for those in the S&P 500 and 12.6% for those in the MSCI World index, according to Bloomberg

Citigroup estimates that Korean company payouts over the past decade have been equivalent to just 13.3% of market capitalization, lower even than Japan.

Combined with an increase in activism following a rapid influx of foreign funds from abroad that has pushed foreign ownership of Japanese stocks to a record 31%, companies are responding.

Led by Toyota Motor , which has about $41.6 billion in cash, more than half of the 1,824 companies listed on the Tokyo Stock Exchange’s first section announced dividend increases for the year ending March 31. Toyota, NTT DoCoMo Inc. and Mitsubishi Corp. have also said they would buy back shares.

For Beijing, tapping corporate cash was done with the stroke of a pen. In May, the government said it would require 121 companies it owns to beef up their dividend payments by 5 percentage points. That will require most to pay at least 10% of their after-tax profits to the state. China National Tobacco Corp. will have to fork over a quarter of its net profits.

South Korea’s plan lies somewhere between China’s edict and Japan’s hope that more transparent companies will be better for shareholders. While details haven’t been announced, Seoul is preparing a tax on corporate reserves to induce companies to pay more of them out and has urged pension funds to agitate for greater returns.

That is likely to push up dividends and lure investors who love them, according to a Citigroup report to clients on July 30. “Such action can be expected to translate into increased dividend payments, as well as capex and wage growth,” Citgroup’s analysts wrote.