Today’s euro-zone data on inflation and loans to businesses look weak again, and will add more fuel to the debate about whether European Central Bank, and euro-zone policy makers more generally, need to do more to prevent the bloc’s $13 trillion economy from getting stuck in a low-growth, low-inflation rut.

The meager strength of the euro zone’s recovery so far — gross domestic product has expanded by a grand total of 1% in the four quarters since recession ended, while inflation has slipped well below 1% — is leading to a debate about whether Europe is turning into the next Japan.

Inflation in the year to June was only 0.5%, the same as in May, disappointing hopes that the reading might rise. Inflation shows no sign of rising to the ECB’s target of nearly 2% any time soon. ECB officials tend to blame energy and other commodity prices for the below-target inflation, but core inflation was also weak in the year to June, at 0.8%.

Bank loans to businesses, which play a larger role in the European economy than in the U.S., fell further in May. Many European banks are trying to clean up their balance sheets ahead of ECB stress tests later this year, leading to business complaints that lenders are rationing credit. Also, continued problems of high debt and weak growth in much the euro zone make lending to financially fragile small businesses unattractive.

The ECB has already announced a program of long-term loans for banks that’s conditional on more lending to businesses. At the press conference after this Thursday’s monthly ECB meeting, President Mario Draghi will probably be quizzed about whether the ECB is any closer to a program of purchasing asset-backed securities, which many analysts think is the nearest the euro zone will get to Fed-style QE. 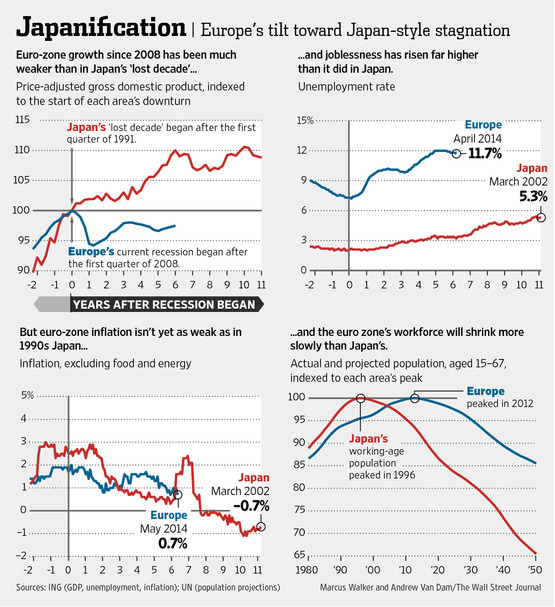