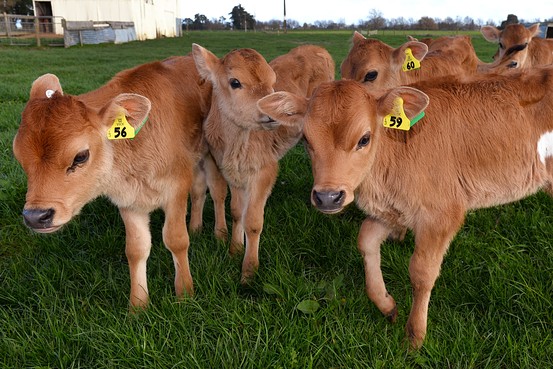 Calves waiting to be fed on a dairy farm near Cambridge in New Zealand’s Waikato region.
Agence France-Presse/Getty Images

New Zealand’s milk-powered economy might be slowing down, and that’s starting to take pressure off the soaring local dollar.

There was more evidence this week of how lower milk prices could slow an economy that’s growing at a 3% annual pace. On Tuesday, dairy giant Fonterra slashed its forecast payout for its farmer shareholders, stripping some NZ$4 billion off their collective income.

Dairy forms the backbone of the New Zealand economy, representing around 25% of exports. The South Pacific nation, with a population of 4.5 million, has been outperforming most major economies thanks partly to booming demand in Asia, not only for dairy but also for meat exports. Up until recently, however, the Kiwi has defied gravity despite a 35% drop in global dairy prices since February.

That’s starting to change. The local currency has lost nearly 4% against the U.S. dollar since its early July highs because of concerns over milk prices. Fonterra’s move this week further weakened the currency.

Fonterra lowered the payout due to the sharp slide in global dairy prices.  It cited strong production globally, a buildup of inventory in China and falling demand in some emerging markets. While it anticipates some recovery in global dairy prices it said “it’s too early to predict how strong this recovery will be or when it will kick in.”

This has taken some pressure off the central bank to take action against the high Kiwi dollar, which has been hurting other exporters. Last week the central bank lifted interest rates for the fourth time this year amid a sign of overheating, especially in the housing sector, but signaled a pause to assess the impact of the increases.  It also came out swinging against the high Kiwi – calling it “unjustified,” something traders and economists said was a red flag for intervention.

The recent fall in the Kiwi “definitely reduces the need for the RBNZ to intervene,” said Sam Tuck, a currency manager with ANZ Bank.

“Provided the U.S. dollar doesn’t derail the party, we expect the New Zealand dollar to continue to decline… and therefore taking the RBNZ out of the picture,” he said.

While the RBNZ has been lobbying hard for a weaker dollar – in order to improve the competitiveness of New Zealand’s exports on the global stage – it also does not want it to fall too sharply, which would push up the cost of imports.

For now, that seems far off. Even despite the recent decline, the local currency is still up over 3% against the U.S. dollar this year.