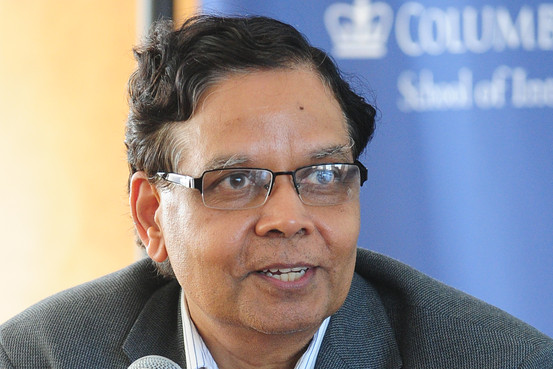 Columbia University economics professor Arvind Panagariya — who some predict could be called to advise Prime Minister Narendra Modi — said the Indian economy needs to worry less about inflation and more about growth and reform.

Mr. Panagariya is tipped to take a top advisory role in Mr. Modi’s new government, possibly even as the chief economist, some analysts say, because his business-friendly views are seen as largely in line with Mr. Modi’s.

While Mr. Panagariya would not speculate on whether he will be called to help with the new government’s economic policies, he did talk to The Wall Street Journal about his vision for the country.

He is less worried about inflation than others, such as Reserve Bank of India Governor Raghuram Rajan who has raised interest rates three times in the last year to fight inflation.

“It is not clear to me that once inflation has been brought down to 7-8% range, pushing the brakes further on money supply buys us a lot,” he said.

The Indian-born scholar — who has served as the chief economist of the Asian Development Bank and has advised the World Bank, the International Monetary Fund and the World Trade Organization — also spoke about what the new government can do to address poverty and why the comparison of Mr. Modi to U.S. President Ronald Reagan may be misplaced.

The Wall Street Journal: What should the new government’s top priorities be?

Arvind Panagariya: Make the 2012 legislation on retrospective taxation prospective (by promising) to codify the tax laws and accompanying regulations to end bureaucratic discretion and eliminate uncertainty that accompanies such discretion beginning April 1, 2015. It should also commit to completing the goods and services tax reform by March 31, 2016, fix the health of the banks, end the subsidy on diesel and cut that on cooking gas from nine to six cylinders and commit to reforming the land acquisition law within the current fiscal year.

WSJ: Should the new government be looking to boost consumption?

Mr. Panagariya: I favor reforms that would stimulate growth, which will automatically raise expenditures on consumer durables et al. Given the fiscal constraint facing the government, I would not advise measures such as tax cuts or subsidies to boost consumption.

WSJ: Many have compared Narendra Modi to Ronald Reagan, who led the U.S. when it was facing high inflation and slow growth. Should India look to cut taxes the way Mr. Reagan did?

Mr. Panagariya: The parallel is superficial and misplaced. India is growing at nearly 5% currently, inflation is below 10% and real interest rates are either negative or marginally positive. When Reagan came to power, the U.S. was experiencing negative growth, higher inflation and very high real interest rates. The current Indian problems have originated in mismanagement by the government and the solution lies in correcting that mismanagement. Cutting taxes would add to fiscal deficit, making matters worse.

WSJ: What can the government do to curb inflation?

Mr. Panagariya: In so far as food inflation is the concern, the government should release food from its massive stocks on a significantly larger scale. It should also cut on procurement since it results in reduced supplies in the open market. In the medium term, we need the reform of agricultural marketing and policies that undermine the shift in farming toward fruits and vegetables.

WSJ: Should the RBI be lowering interest rates right now?

Mr. Panagariya: Personally, I am a dove when it comes to inflation. It is not clear to me that once inflation has been brought down to 7-8% range, pushing the brakes further on money supply buys us a lot. Moreover, given that a very large part of the economy is simply cutoff from credit markets, it is not clear how effective the interest-rate hikes are in taming inflation. As I do not claim to be a macroeconomist, I am simply raising the questions without being prescriptive in this matter.

WSJ: The last government implemented several social programs like the Mahatma Gandhi National Rural Employment Guarantee Act to help lift people out of poverty. Do you think they were effective?

Mr. Panagariya: For the money spent, MNREGA achieved very little. My personal preference would be for replacing the scheme with cash transfers. But if this is ruled out, it requires significant reorientation by being connected to building housing and toilets for the poor, construction of rural roads and skill acquisition. Sitting idle or digging a few holes and filling them back each day should not qualify as employment. Employment should result in skill acquisition and assets created should be tangible.

WSJ: Should the new government focus on increasing growth by expanding on manufacturing?

Mr. Panagariya: Expansion of labor-intensive manufacturing is a matter of life and death. With more than 450 million workers and 10 million or more added each year, India needs to create a large number of organized-sector jobs for semi-skilled workers and help raise wages in the organized sector. Labor-intensive-manufacturing growth is essential for both.