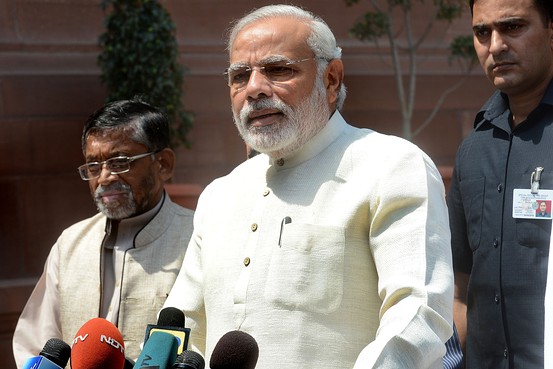 Fresh off an emphatic election victory, India’s new government went to work in late May. The formation of a relatively lean Cabinet confirms expectations that Prime Minister Narendra Modi’s government is keen to come across as hard-working and committed to business-friendly reforms.

However, pledges to maintain fiscal and monetary discipline mean no substantive stimulus measures are in the pipeline, the cost of capital will remain high and a major turnaround in the banking system will take time.

A key question then is how the economic cycle will turn in favor of investment and growth. Prime Minister Modi may improve the running of government and clear the logjam of stalled projects, but we don’t think that’s enough to get the ball rolling for India’s economy. India is short of liquidity at this juncture, meaning the cost and availability of project financing will remain an issue.

To find additional liquidity, India needs to attract higher domestic and external savings. But confronted with slowing growth and soaring inflation, Indian households in recent years have reduced their savings: After peaking at 31.4% of gross domestic product five years ago, gross household savings have fallen recently to 27.4% of GDP. As a share of income, household saving has declined by five percentage points since 2010.

As profitability has declined, corporates also have reduced savings and dipped into their cash, while the public-sector fiscal deficit has widened since 2008.

This dynamic means that short of a major improvement in government finances or corporate profitability, India’s financial system will lack the money it needs to fund a turnaround in investment.

Perhaps investor sentiment toward India has turned so positive that surging remittance, portfolio and FDI flows will take care of funding needs. But the central bank, seeking to fight inflation and maintain financial stability, is in no mood to accommodate external inflows. Indeed, it has been intervening in the foreign-exchange market to ensure that capital flows don’t fuel a credit boom or asset-price distortions.

We think the RBI would much rather see investment funded through “crowding in” – that is, a reduction in public-sector borrowing that creates space for domestic business financing. That’s the textbook prescription for macroeconomic adjustment, but it’s time-consuming — and consumers and investors might lose patience. We estimate it will take three to four years to achieve meaningful fiscal consolidation of, say, 2%-3% of GDP in savings.

Another approach is available — though there hasn’t yet been any push in that direction. Policy makers could ignore short-term fiscal consolidation in favor of public investment spending, accepting that the fiscal deficit would grow in the short term with the expectation that a medium-term rise in growth — and government revenue – would allow a return to fiscal discipline down the road.

We think that would be the wrong approach: Government pump-priming could undermine the battle against inflation and blow out the current-account deficit. But given the expectations of a quick dividend from Mr. Modi’s victory, there could be pressure to move in this direction.

If it follows investor-friendly policies, as expected, India will likely receive substantial amounts of foreign direct investment in coming years — with Japan leading the way – that could generate investment without the sort of distortions one fears from portfolio flows. But that will take time — and still might fall short of the amount needed.

Whether policy makers pursue domestic adjustments or external flows to fund an investment recovery, there are likely to be complications and delays. That means expectations of a swift, major turnaround could well end in disappointment.