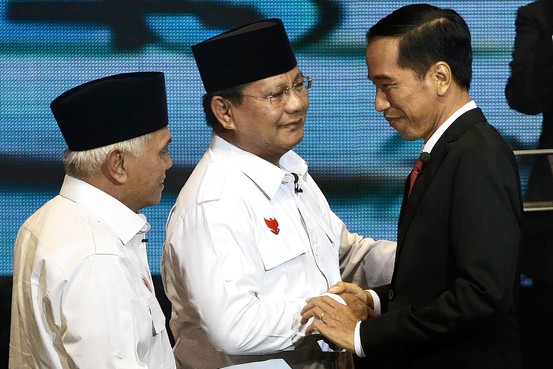 Whoever wins Indonesia’s July 9 presidential election will face tough political and fiscal choices on the issue of fuel subsidies.

Both Jakarta Governor Joko Widodo and Prabowo Subianto, a former commander of military special forces, have promised to phase out fuel subsidies, which amount to 150,000 rupiah ($12) per day for each driver in Indonesia. In recent years the subsidies have become a growing burden for the government amid rising sales of motor vehicles in one of Asia’s most vibrant consumer markets.

Despite a reduction to subsidies last year that sharply drove up prices of gasoline and diesel, the fuel subsidy bill has risen from about 0.7% of gross domestic product in 2007 to an estimated 2.8% of GDP this year, according to recent research from Goldman Sachs .

The subsidy regime is designed to keep the cost of fuel stable for consumers. That means any increase in the price of oil, or a decrease in the rupiah currency, will increase the cost to the government.

The issue played a prominent role in a debate between the candidates Sunday night.

The economic team of Mr. Widodo, the frontrunner, has said the candidate is considering either raising subsidized fuel prices by 83% in one go to bring them in line with market prices, or raising them gradually by 12.5% every quarter. They didn’t provide a time frame for any changes.

“Whoever is elected will be confronted with the problem” of how to phase out fuel subsidies, said Bawono Kumoro, a political analyst with the Habibie Center, an independent think tank. “It needs bravery and success in getting support in Parliament.”

Mr. Kumoro doubts the next government will be able to completely remove such subsidies during its five-year term, as the move is politically sensitive.

Past fuel-price hikes have sparked riots. Two years ago, faced with violent street protests, President Susilo Bambang Yudhoyono failed to get parliamentary support to raise fuel prices by an average of 33%. That handcuffed government spending and – because Indonesia is a net fuel importer — helped blow out the current-account deficit.

That came back to haunt the country last summer, when anticipation that the U.S. Federal Reserve would end its bond-buying program led foreign investors to pull funds from Indonesia on concerns about the current-account deficit, sending the rupiah plunging and Indonesian bond yields soaring. Amid the turmoil, Mr. Yudhyono pushed through measures to raise subsidized fuel prices by an average of 33%, sharply pushing up consumer inflation.

The government predicts fuel subsidies will rise as high as 246 trillion rupiah (US$21 billion) this year — some 4% of gross domestic product, a record high — from 240 trillion rupiah last year, as robust motor-vehicle sales boost fuel consumption.

Mr. Yudhyono’s government has indicated it will leave a decision on further subsidy cuts to the next administration, which will begin a five-year term on October 20. With no plan to hike fuel prices, and with revenues from tax and natural resources expected to be weak, the government forecasts the deficit will swell to 2.4% of GDP this year from 1.7% last year.

Indonesian law caps the budget deficit at 3% of GDP. Without a change to the subsidy regime, any sharp rise in global oil prices or marked depreciation in the rupiah could push the deficit to the statutory limit, forcing the government to cut spending in other areas.

Goldman Sachs predicted Indonesian policy makers would eventually  have to fix or cap the subsidy amount.

“Although this would expose consumers to global oil price and currency shocks directly, it would insulate the budget and reduce the probability of large, fiscally driven inflation spikes,” research director Andrew Tilton wrote.

Sri Adiningsih, a member of Mr. Widodo’s economic team, told The Wall Street Journal that a Widodo administration would first show the public it can manage the budget well, before looking to save on fuel subsidies.

“The fuel subsides will be shifted — after the government has gained the people’s trust — to programs that will enhance the people’s welfare and build infrastructure,” she said.

Hashim  Djojohadikusumo, Mr. Subianto’s younger brother and a senior member of his Gerindra Party, recently told the media that the party wants to gradually remove subsidies.

Tax reform that he said could produce some $6 billion of additional revenue per year “will give us the cushion to be able to do it gradually,” Mr. Djojohadikusumo said. The government “would not survive if we were to do it overnight.”

Most economists say the clock is ticking and the next government won’t have the luxury of postponing action on subsidies.

“The new government may be forced to make a quick decision in its first months or weeks in office to save fiscal space in 2015,” Citigroup economist Helmi Arman said. Mr. Arman said a move on subsidies is likely toward the end of this year.

But Juniman, a Bank Internasional Indonesia economist who uses only one name, said that at least during its first 100 days in office the government won’t take steps that might anger constituents.

“I think the first quarter of next year will be the earliest time frame when the new government may raise fuel prices,” he said.