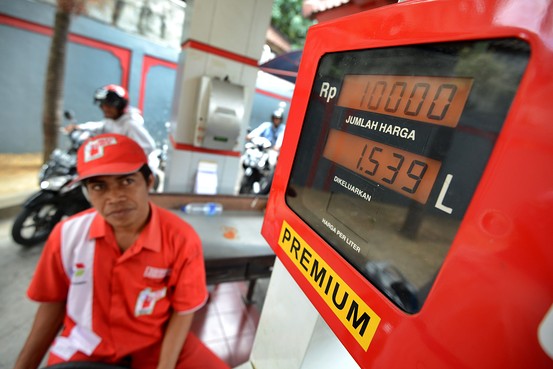 Indonesian motorists queue up for gasoline amid a shortage of subsidized fuel.
Agence France-Presse/Getty Images

Indonesia squeezed out a narrow trade surplus in July but the Southeast Asian nation’s economy remains fragile and exposed to sudden shifts in capital flows.

The country trade balance is in deficit for the year, and its government budget deficit also is wide, a reflection of costly state subsidies on the price of fuel. These twin deficits mean the country is reliant on foreign funding to make up the difference, largely in the form of hot money flows into the nation’s stock and bond markets.

A year ago, a reversal of these flows caused by fears that U.S. yields would move higher, hurt Indonesian assets. The government has set about trying to readjust the economy, but as Monday’s figures show, there’s still a way to go.

The region’s largest economy posted a $124 million surplus on about $28 billion in trade in July. But the return to surplus masks weakness in the economy. Exports fell 6% on year, reflecting lower commodity exports as China’s growth moderates. Imports fell 19.3%, keeping the trade balance positive.

Both figures were partly distorted by the Muslim holiday period. Still, the underlying trend is worrisome. The commodity-dependent economy’s main growth engine is stalling, and the contraction of imports shows low domestic investment and consumption.

Business activity in July also contracted in Indonesia for the first time this year, as measured by HSBC’s manufacturing purchasing managers’ index, although some analysts said it could be a temporary lull after robust readings in recent months.

After the data, ANZ said there are downside risks to its estimate Indonesia’s economy will grow 5.4% in 2014.

Indonesia’s trade balance remains about $1 billion in deficit for 2014, hard hit by low prices for commodities—which comprise more than half of all its exports—and new rules that have prevented miners from exporting billions of dollars in unrefined and semirefined minerals.

The country should get a boost in the months ahead as giant miners like Freeport McMoRan Copper & Gold resume activity; Freeport alone could add up to $2 billion in exports by the end of the year.

Still, investors remain wary about the imbalances. The rupiah currency has regained some ground since the start of 2014, after the government took steps to rein in the large trade deficit, including raising interest rates last year. Those efforts have had their effect, cooling economic growth to a five-year low.

But the U.S. dollar is still 7% higher against the Indonesia’s rupiah over the past 12 months.
Investors also want to see the government rein in its large budget deficit, another imbalance which makes the country dependent on foreign financing.

Economists are worried about the country’s rising tab for energy subsidies that make gas prices among the cheapest in the region. Indonesia has been an oil importer for the past decade, and in 2014 it will spend about $21 billion of its $173 billion government budget on fuel subsidies. It plans to increase that to $25 billion next year, or 14% of its total budget.

That allocation means little money is left over to build the ports and roads the archipelago nation badly needs to reduce cumbersome bottlenecks and attract manufacturing investment that can wean the economy off commodities.

Reform of the fuel subsidy could also bring the budget deficit under 3% of gross domestic product, a step investors want to see.

President Susilo Bambang Yudhoyono last week hinted that he will pass the burden onto President-elect Joko Widodo, who takes power in October.

–Andreas Ismar contributed to this article.