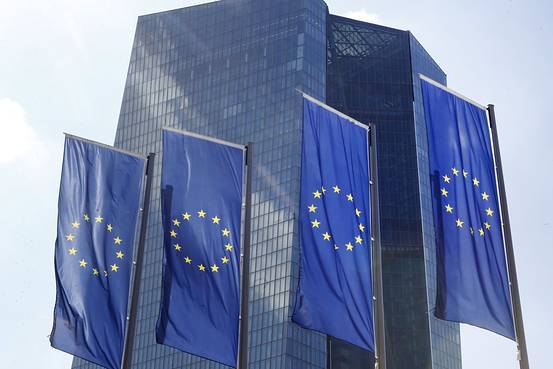 European Union flags wave in front of the headquarters of the European Central Bank in Frankfurt, Germany.
Associated Press

A recent ECB publication suggests that underlying inflation might not have reached a steady turnaround point. The publication’s conclusions, if accurate, could open the door for more ECB support to the eurozone economy, or at least put off any debate about tapering.

The paper published Monday, a box in the central bank’s forthcoming economic bulletin, looks at the indication of underlying inflation known as HICPX, or inflation excluding food and energy. It stood at 0.8% in June, down slightly from 0.9% in May, but higher than the all-time low of 0.6% reached in March. For comparison’s sake, headline inflation was 0.2% in June, down from 0.3% in May. In March it was negative 0.1%.

The publication said that six-month annualized data in the HICPX indicator shows a “a relatively persistent increase since the start of the year, but still reveals considerable volatility, making it difficult to conclude that the recent upturn relates to a true cyclical turning point.”

Using a specific measure generally applied to the business cycle would suggest that “on average, developments in a certain direction should be observed for seven to eight months in order for the signal from the cyclical component to dominate over the short-term noise in the series.” This suggests “that the recent upturn needs to be viewed with some caution.”

The analysis says that measures for underlying inflation have gone up from low levels, “in line” with the HICPX path foreseen in the latest ECB staff surveys. But “on the basis of the out-turns observed so far, it remains too early to identify a turning point in underlying inflation from a statistical point of view. More data are required for the signal for such a turning point to become strong enough.”

In plain English, this means that underlying inflation might not be firmly on the way up, which could potentially open the door to more policy easing from the ECB, or provide ammunition to ECB President Mario Draghi, should he face pressure to taper the ECB’s QE purchases.

“The cautious conclusion that ‘we can’t be sure’ core prices have turned will leave the [ECB’s] Governing Council with some leeway should it feel that more policy accommodation is needed at some point,” said Credit Agricole analyst Frederik Ducrozet. “At the very least this will prevent the ECB from turning more hawkish by early next year if headline inflation rebounds more decisively and closer to 2%.”