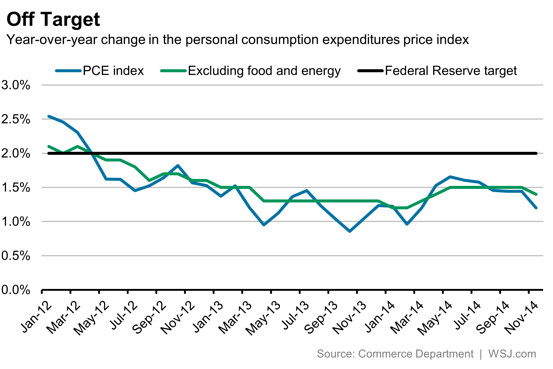 Annual inflation, even beyond falling gasoline prices, slowed in November, a potential worry for Federal Reserve officials as they look toward tightening monetary policy next year.

The price index for personal consumption expenditures excluding food and energy was up 1.4% in November from a year earlier, the Commerce Department said Tuesday. That’s a slowdown from October’s annual reading of 1.5%, which itself was revised down from a previously reported 1.6% gain.

Broader inflation, which includes energy and food, was even weaker. The overall PCE price index, the Fed’ s preferred gauge, fell 0.2% in November and was up 1.2% from a year earlier. That marked the 31th consecutive month that inflation remained below the Fed’s 2% annual target.

Fed Chairwoman Janet Yellen has indicated energy prices won’t influence monetary policy moves. “Movements in oil…now down and perhaps later up, will move inflation around, certainly headline inflation,” she said last week. But policymakers anticipate “those impacts to be transitory.”

But if the weak reading indicates falling energy prices are depressing costs for other goods and services, that could complicate the calculus for when the Fed raises short-term interest rates from near zero, where they’ve stood since 2008.

“Having to spend less on gas and energy…it’s like a tax cut that boosts their spending power,” Ms.  Yellen said last week.

U.S. Economy Posts Strongest Growth in More Than a Decade