Inside the Fight Over Productivity and Wages – Real Time Economics 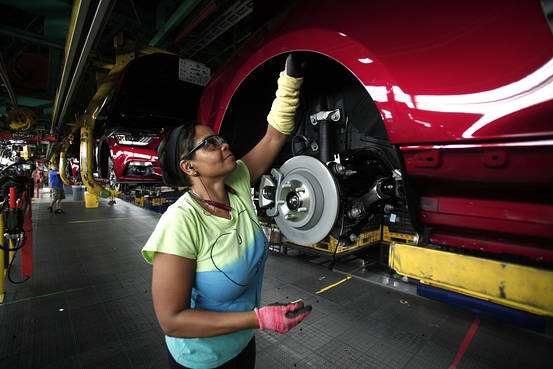 If wages did closely track productivity gains worker by worker, we would be seeing some much wealthier car-assembly-line workers walking around, since manufacturing productivity has risen by 4.6% annually since 1973.
BILL PUGLIANO/GETTY IMAGES

In case you missed it, there’s a chart making the rounds that has come to represent, for some, all that is wrong with the American economy.

The top line shows worker productivity growing by 72.2%, or 1.33% per year, between 1973 and 2014. The bottom line shows median workers’ hourly compensation increasing by 9.2%, or 0.2% annually, over that same period. The gap between them more or less symbolizes the big empty space in workers’ wallets. The chart, part of a broader research series from the left-leaning Economic Policy Institute, has struck a chord. Hillary Clinton tweeted a version of it following her first major economic policy speech in July, and has clearly leaned on EPI research in calling for policies that boost wages.

But the chart—and its data, methodology and conclusions—has become a flashpoint.

How one interprets the mass of historical data we have on workers’ productivity, wages and growth has profound consequences for which economic policies one might pursue. Most economists agree that productivity is essential for raising living standards, and that the superrich have seen their incomes skyrocket. The devil is in the details.

The economists behind the chart have now come out with guns blazing, releasing a vigorous defense of their work that decries critics’ attacks as “baseless.” The briefing paper by Josh Bivens and Lawrence Mishel, “Understanding the Historic Divergence Between Productivity and a Typical Worker’s Pay,” calls wage stagnation for the majority of American workers “a bald fact.”

As with so many questions in economics, it depends—on who counts as the “typical worker,” how one accounts for productivity and what one means by “the economy.” Here’s a look at a few of the issues in dispute:

Who is the “typical worker”? Messrs. Bivens and Mishel have chosen “production and nonsupervisory workers” to represent the masses. Workers in this broad category account for about 80% of private-sector payroll employment.

Critics call this cherry-picking. A better measure, suggest critics like Scott Winship, an economist at the right-leaning Manhattan Institute, would be to include all workers, since productivity gains are presumably being driven by the entirety, and not just 80%, of the workforce. The new report also includes another chart that plots average hourly compensation for all workers. The gap, while narrower, is still significant. But as Messrs. Bivens and Mishel have pointed out, measuring wages for all workers misses their main point, which is that some workers have gained far more than others. And as they note in the report, workers in the 90th to 95th percentile income range (using Social Security data) saw their wages rise by just 37.2% between 1979 and 2013, meaning that even those very near to the top benefited from only about half of the overall productivity gains in that period.

“You’re over the 90th percentile in wages before you’re in a group of workers that actually sees their pay track with productivity at all,” Mr. Bivens said. “I find it really unconvincing, this idea that only the top 5% of workers have seen their actual productivity rise at the average rate over the entire generation.”

Additionally, if wages did closely track productivity gains worker by worker, we would be seeing some much wealthier car-assembly-line workers walking around, since manufacturing productivity has risen by 4.6% annually since 1973. But real compensation for manufacturing workers has only risen by 1.4% annually in that period, roughly the same amount as wages have risen in the far less productive services sector.

How do we measure wages and productivity? Productivity and compensation are both adjusted for inflation over time—but by different measures. The measure of productivity, or output, is converted based on the components of America’s national output (gross domestic product, or GDP).  Adjustments for wages use an index that tracks the prices of things workers consume, to give a sense of how far each earned dollar goes towards paying for life’s essentials. Prices have risen faster for consumer goods and services than for the prices of things that workers produce (such as machinery or airplanes), creating what Mssrs. Bivens and Mishel call the “terms-of-trade gap.” This gap accounts for a little less than one-third of the overall gap between pay and productivity.

Mr. Winship said that introducing these adjustments conflates two separate questions: whether workers are paid fairly with respect to their productivity, and whether workers’ standards of living are rising.

Robert Gordon, an economist at Northwestern University who has studied productivity trends, said the choice of using what’s known as the consumer-price index, or CPI, instead of the price deflator for personal consumption expenditures, or PCE, overstates inflation. Using the PCE, which the Federal Reserve uses in its evaluation of inflation trends, reduces the gap by about one-fifth, because the PCE has been about 0.5 percentage point lower than the CPI each year for the past decade.

“You can’t blame policy, or a change in the balance of power between workers and management, for the fact that consumer prices go up faster than producer prices,” said Mr. Gordon, who said he otherwise agrees with the EPI’s analysis.

Then how productive is the average worker anyway? Robert Lawrence, an economist at Harvard University, suggests the higher return to some workers could reflect the fact that they truly are more productive than other workers. Who are these high performers? Surprisingly, they’re not only Mensa members or people with ironclad work ethics. They’re workers in mining, energy and manufacturing, all sectors that have seen innovations in what Mr. Lawrence calls “labor-augmenting” machinery that makes each worker capable of producing more widgets (or cars or oil) in a given period.

Mr. Winship also points to recent research by the Organization for Economic Cooperation and Development that locates the bulk of productivity gains among a small number of “frontier firms” that are far more productive than their peers. An economist who co-authored that report attributed the recent productivity slowdown, dating back to 2004, to “a slowing of the pace at which innovations spread throughout the economy: a breakdown of the diffusion machine.”

Mssrs. Bivens and Mishel counter that what they call “capital deepening,” the spread of capital investment across sectors, should have made all kinds of workers more productive, such as supermarket cashiers who can now scan barcodes instead of punching in prices item by item. Furthermore, they argue, according to basic economic theory, rising productivity should lift wages even in sectors or firms that haven’t experienced the same productivity. This is due to a phenomenon known as “Baumol’s cost disease,” which proposes that workers in sectors not known for productivity gains—symphony musicians, barbers—will experience wage gains to prevent them from simply migrating to higher-productivity sectors.

So where does all the money go?  Even if a small number of firms (or the top 1% of American earners) are responsible for the bulk of productivity gains, if worker pay has not risen in recent decades, it raises the question of whether the channels through which those rising wages might normally spread through the economy are blocked. In other words, why is this economy somewhat immune to Baumol’s cost disease?

Mssrs. Bivens and Mishel point to deliberate policy choices, such as the signing of free-trade agreements and the failure to raise the federal minimum wage, that they say explicitly funnel profits upwards and into the pockets of top management. But it also seems clear that some skills and people are in higher demand than others. About 34% of Americans have completed college, one key measure of human capital, but only 8% have a master’s degree or higher, according to the National Center for Education Statistics.

In the next year, sought-after workers in growing fields like technology, creative and administrative professions, and accounting and finance should expect to see average base salaries increasing by slightly more than 4%, according to staffing agency Robert Half. That far outpaces projected across-the-board economic growth for 2016, which economists surveyed by The Wall Street Journal put at 2.7%.

One feature of the new EPI analysis is a nifty table (see page 8) that goes some way towards answering why the gap has widened. The table highlights how between 1995 and 2000, labor’s share of income grew, despite larger-than-usual growth in inequality of compensation.  Why? Because when labor markets are tight and productivity is rising–two features of that five-year-long golden age—workers’ pay will rise. This suggests that pursuing full employment, generally considered a 5% unemployment rate or below, could go a long way towards generating long-hoped-for upwards wage pressures throughout the economy.

A few things are clear: We know that productivity has slowed in the last decade, although some argue that it is not being measured properly. The biggest line items in a household budget—housing, health care and education—are soaking up ever-larger shares of workers’ take-home pay.  And we can be sure that economists (and politicians) will continue to debate.

How Productivity Growth Could Change the Fed’s Rate Path

Goldman Sachs and J.P. Morgan Can’t Agree Why the Economy’s Productivity Has Slumped