Investors Are Still Cautiously Optimistic About 2019. But Here’s What Could Go Wrong.

After an unexpectedly bad year for the stock market, investors are looking for clues about what 2019 will bring.

The hope on Wall Street is that the underlying economy of the United States is sound, that the recent selling will burn itself out and that stocks will resume their record-setting climb. But the risk is that the plunge, the worst annual decline in a decade, could be the start of something more sinister.

The forces that pushed the S&P 500 down 6.2 percent in 2018 are still in place. The economy is still doing well, but it does not appear to be as strong as it once was. President Trump is lashing out at the Federal Reserve and the central bank’s interest-rate increases pose a risk to corporate profits and investors’ appetite for stocks. America’s trade war with China continues, and the technology giants that dominate the stock market face heightened scrutiny about their business practices.

As investors try to gauge the seriousness of these risks, stocks could lurch in different directions at each new event. A meeting of the Fed later this month, an earnings report in February or a trade-negotiation deadline in March could all prove to be catalysts for a big rise or fall.

But Wall Street’s top stock pickers are still expecting gains next year, even if they’re not quite as boisterous in their predictions as they once were.

“It could get more frightening before it gets better,” said James Paulsen, chief investment strategist at the research firm Leuthold Group. “But I think we survive for another run.”

Last year was a reminder of how unpredictable stock markets can be. In January, with corporate tax cuts in place, the outlook for the market in the United States was great. And stocks did hit a record high in September, with Apple and Amazon becoming the first publicly traded American companies to be valued at more than $1 trillion. But 2018 was also turbulent, with markets falling sharply in February and again at the end of the year.

The S&P 500 narrowly avoided one grim milestone: a 20 percent drop from its high, a decline that would signal the start of a bear market. The index ended 2018 down 14.5 percent from its high point, and a bear market could yet be in store should stocks experience another decline similar to what they went through in early December. If that happens, the pessimism that has hovered over the stock market could leach into the rest of the economy, as companies grow wary of taking risks, expanding or adding more workers.

Here are the factors that will help determine whether that happens this year. 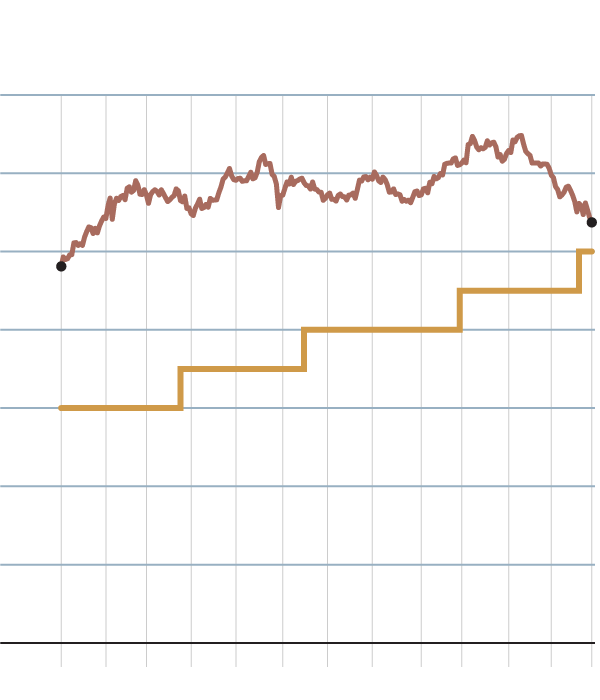 Rising interest rates, and expectations about where those rates are headed, may have weighed on stock prices more than anything else in 2018.

With the United States’s economy humming, the Fed increased its target rate four times in 2018, pushing up borrowing costs across the economy. The yield on the 10-year Treasury note, which is the basis for debt like home mortgages and corporate loans, climbed to its highest level since 2011 before falling back. When borrowing costs rise too much, they can be restrictive. Companies and consumers pull back, and the economy suffers.

In the worst case, a recession could occur.

Stocks tumbled as investors became increasingly concerned that the Fed, under a new chairman, Jerome H. Powell, would raise interest rates too far and send a chill through the American economy.

Only more data on the state of the economy will ease the concerns about growth. If investors see the economy growing steadily, jitters over the Fed’s intentions and the recession fears that gripped stocks could fade.

“We’re going to see if the market was wildly hysterical about a recession,” said Ed Yardeni, chief investment strategist at Yardeni Research.

If not, then investors could hang on the Fed’s every move, and monetary policy meeting, in 2019.

President Trump is a factor

Heading into 2018, in the days after Mr. Trump’s tax cuts were enacted, investors were mostly buoyant about his presidency and tolerant of his unpredictable declarations on Twitter.

That bullishness persisted even after it became clear that Mr. Trump was serious about imposing restrictions on trading partners as a way of gaining concessions from them. But as the trade war continued, unresolved tensions with China started to become a concern, and Mr. Trump’s proclamations started to make investors jumpy.

When Mr. Trump referred to himself on Twitter as “Tariff Man,” the message helped spur a drop of more than 3 percent in the S&P 500.

….I am a Tariff Man. When people or countries come in to raid the great wealth of our Nation, I want them to pay for the privilege of doing so. It will always be the best way to max out our economic power. We are right now taking in $billions in Tariffs. MAKE AMERICA RICH AGAIN

It wasn’t just the tweets about China that began to bother investors. Mr. Trump also roiled the markets with criticism of the Fed, which he blamed for the stock market turmoil.

This is a change for the market. When the investment bank RBC Capital Markets surveyed big investors in December about what kept them up at night, Mr. Trump topped the list (interest rates and the trade war ranked second and third).

The only problem our economy has is the Fed. They don’t have a feel for the Market, they don’t understand necessary Trade Wars or Strong Dollars or even Democrat Shutdowns over Borders. The Fed is like a powerful golfer who can’t score because he has no touch – he can’t putt!

When it comes to Mr. Trump, investors have a lot to consider. They will have to weigh whether a partial government shutdown will dampen the economy; what a House of Representatives controlled by Democrats or staff turnover at the White House could mean; and what might happen if the United States and China can’t reach a trade deal by a March 1 deadline.

Global growth has already been slowing 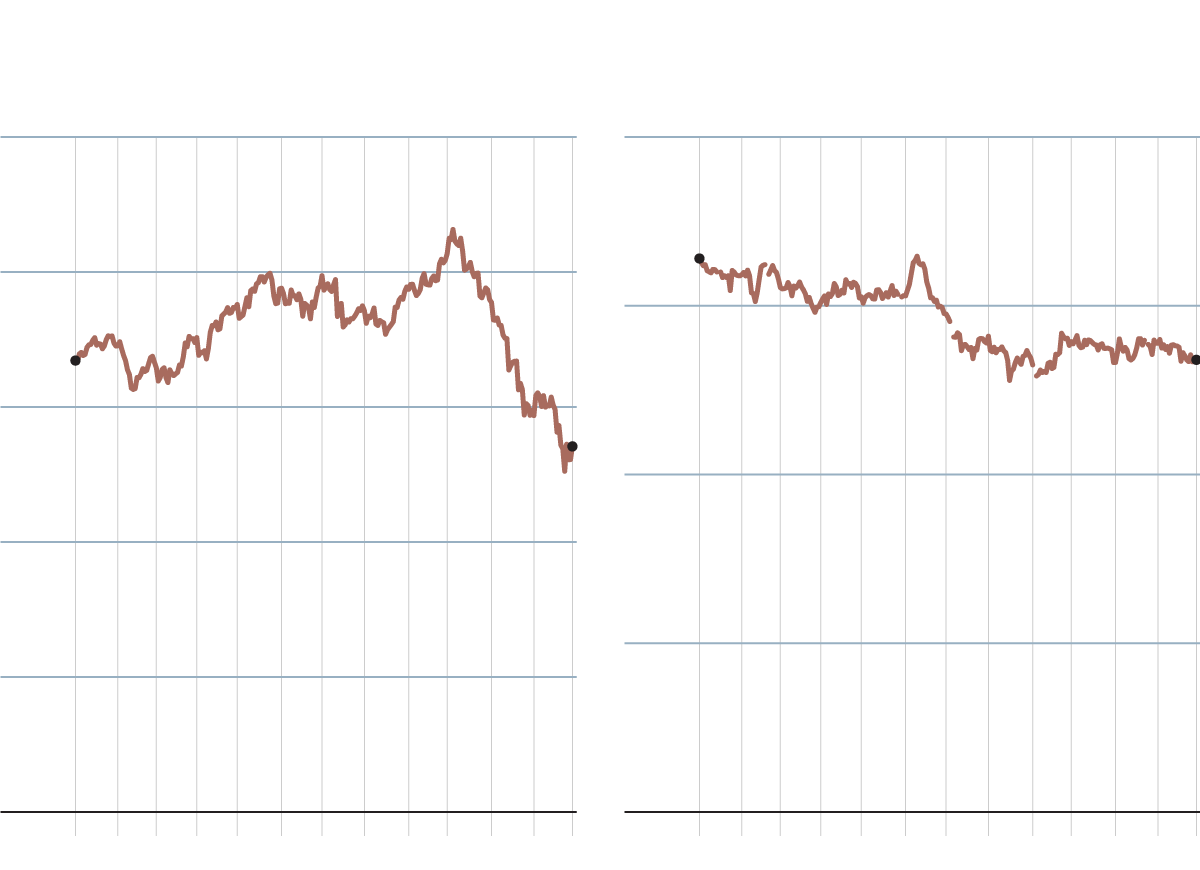 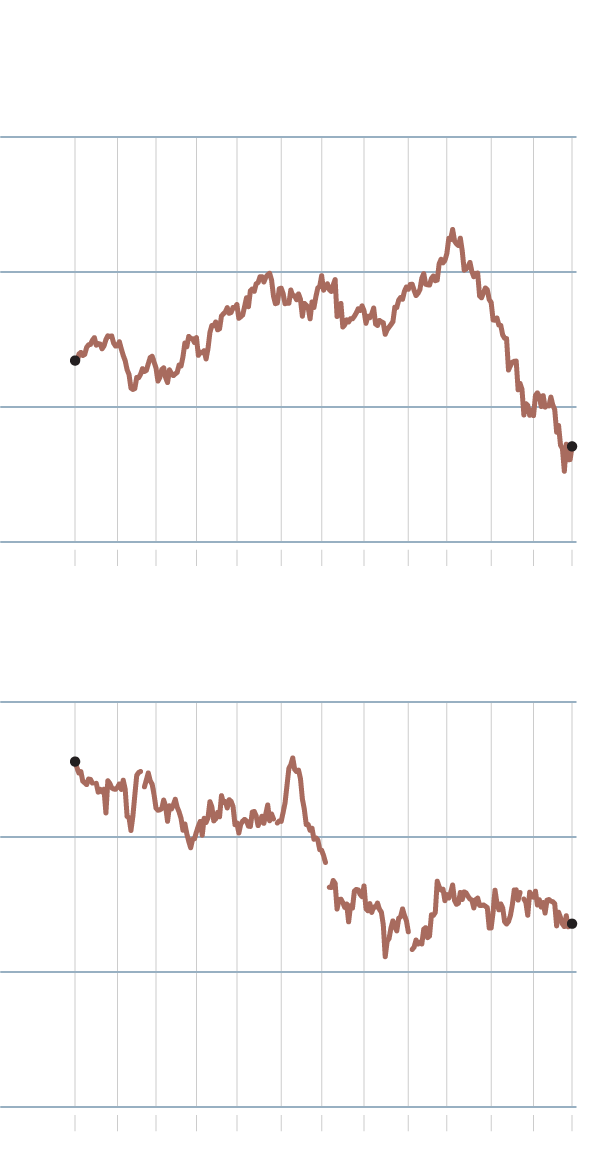 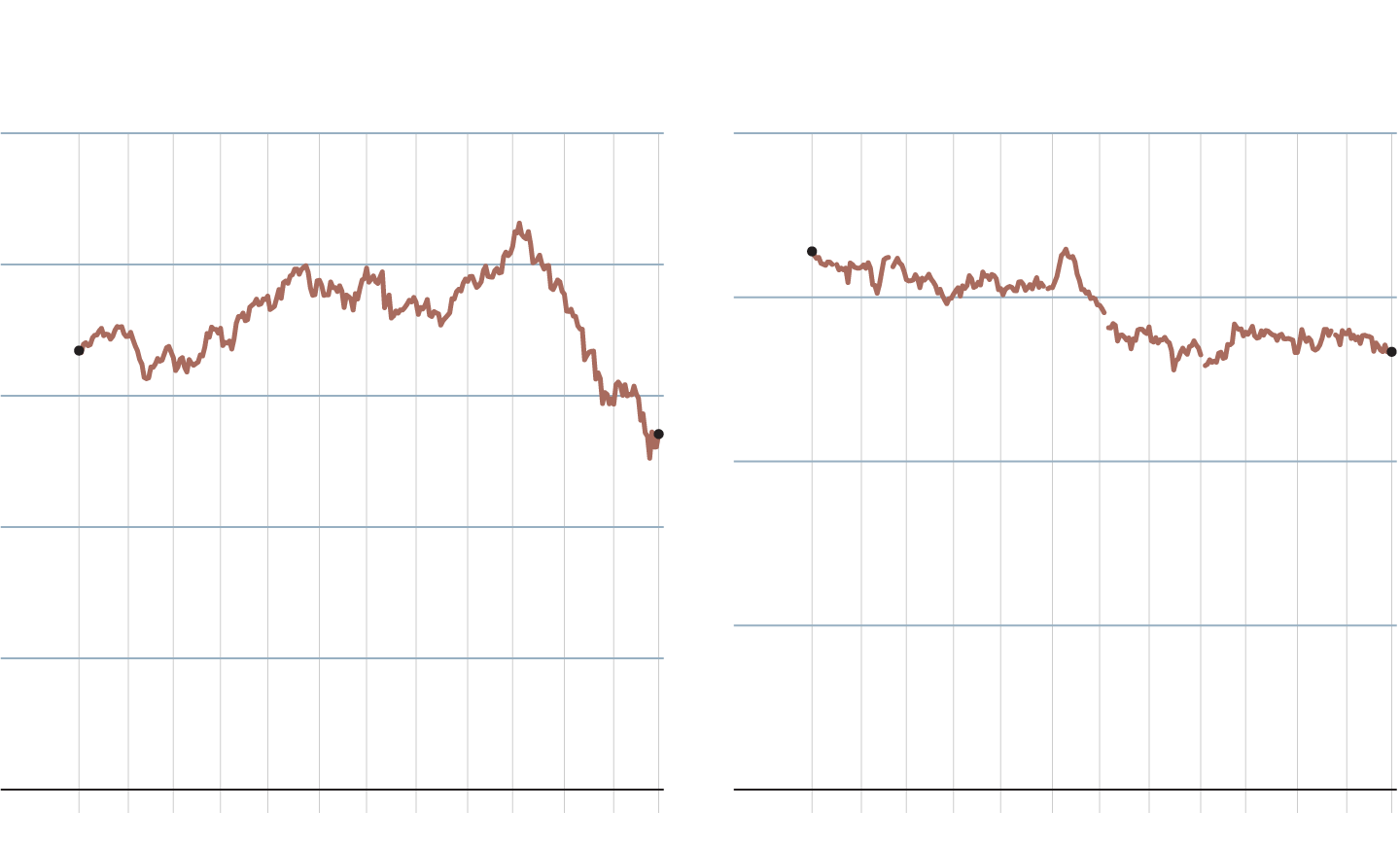 The trade war’s most evident impact so far has been in large overseas economies, which appear to be taking a turn for the worse.

China, Japan and the European Union showed signs of slowing down late in 2018, and reliable indicators of global growth like the price of oil and copper are flashing warnings.

Growth may accelerate if trade agreements are forged in 2019. But the problems could be deeper. China’s methods for pulling its economy out of a rut probably are not as effective as they once were. And the battle between Italy’s populist government and the European Union over the country’s spending plans may heat up again.

The European economy could also be hit hard if Britain crashes out of the European Union without an agreement that keeps trade flowing freely. That could be avoided if Parliament approves a withdrawal deal Prime Minister Theresa May has struck with the union. But that is no sure thing. Mrs. May, lacking the necessary support, was forced to delay a vote originally set for last month until mid-January. She has been trying, so far unsuccessfully, to extract changes from European officials in hopes of improving the chances of passage when that vote comes.

If Parliament ultimately rejects Mrs. May’s proposal, investors will probably remain nervous. And support may grow among lawmakers for a second referendum on whether Britain should leave the European Union. If that happens, stocks — including those in the United States — may rise on the hope that Britons vote to stay. 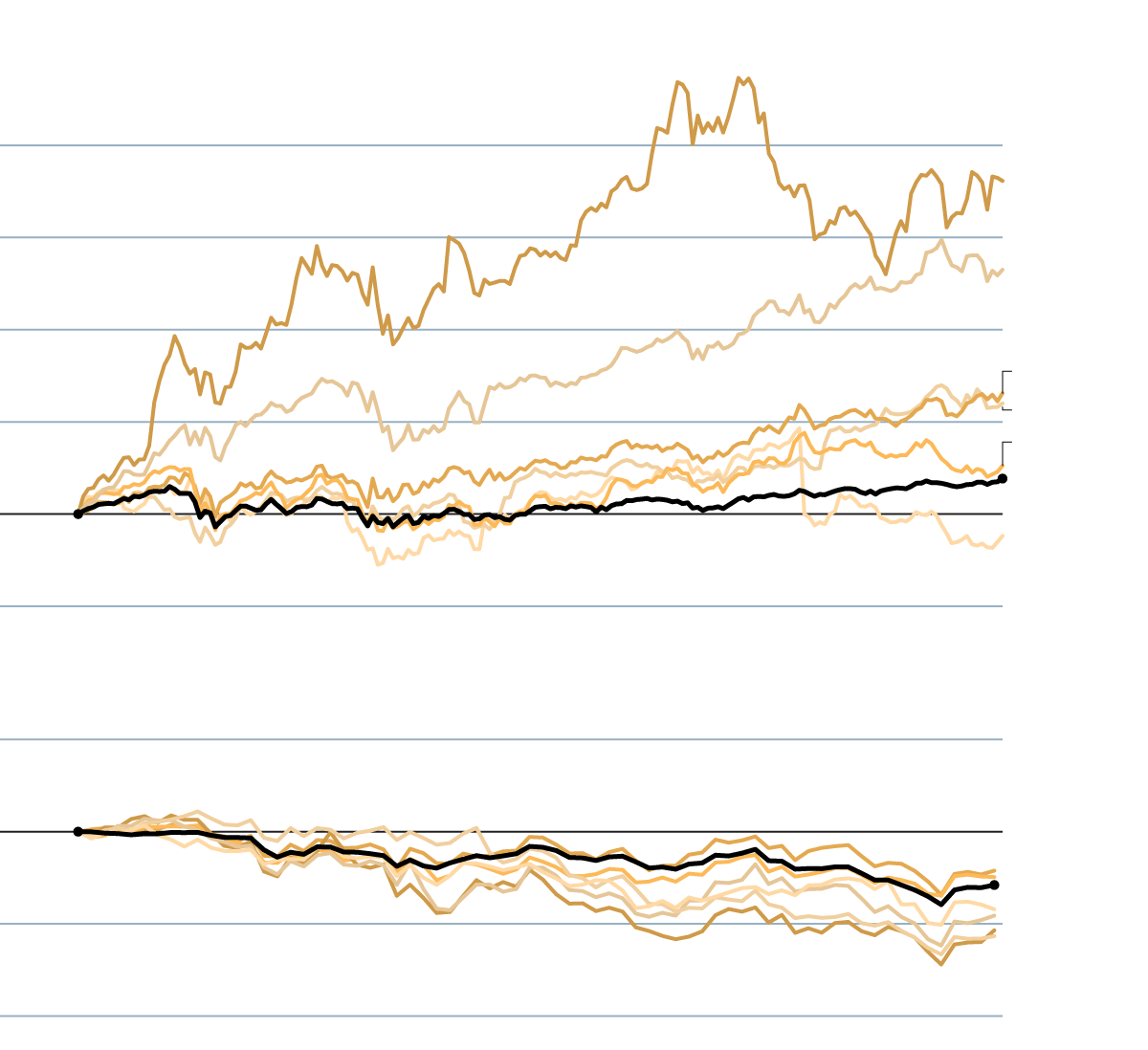 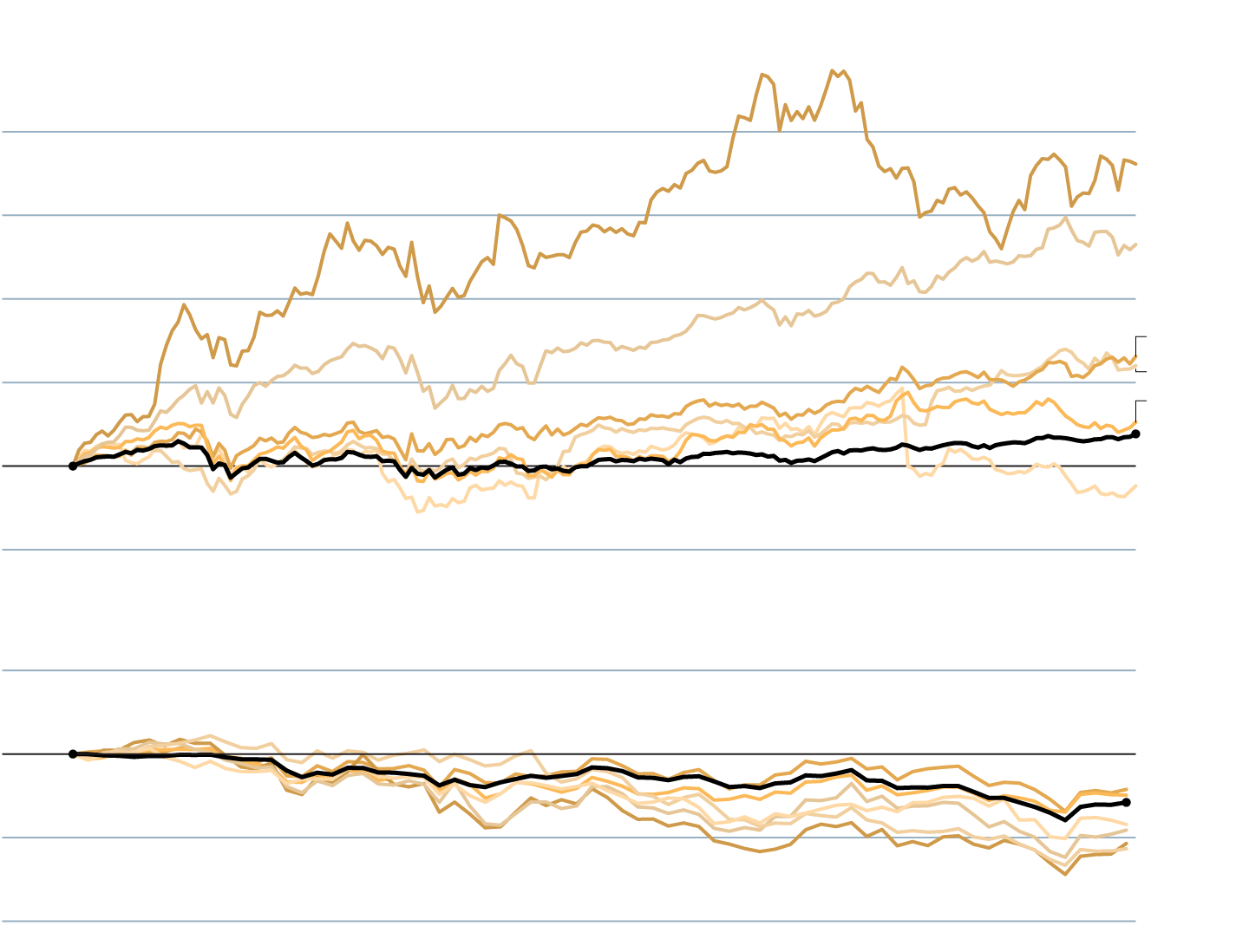 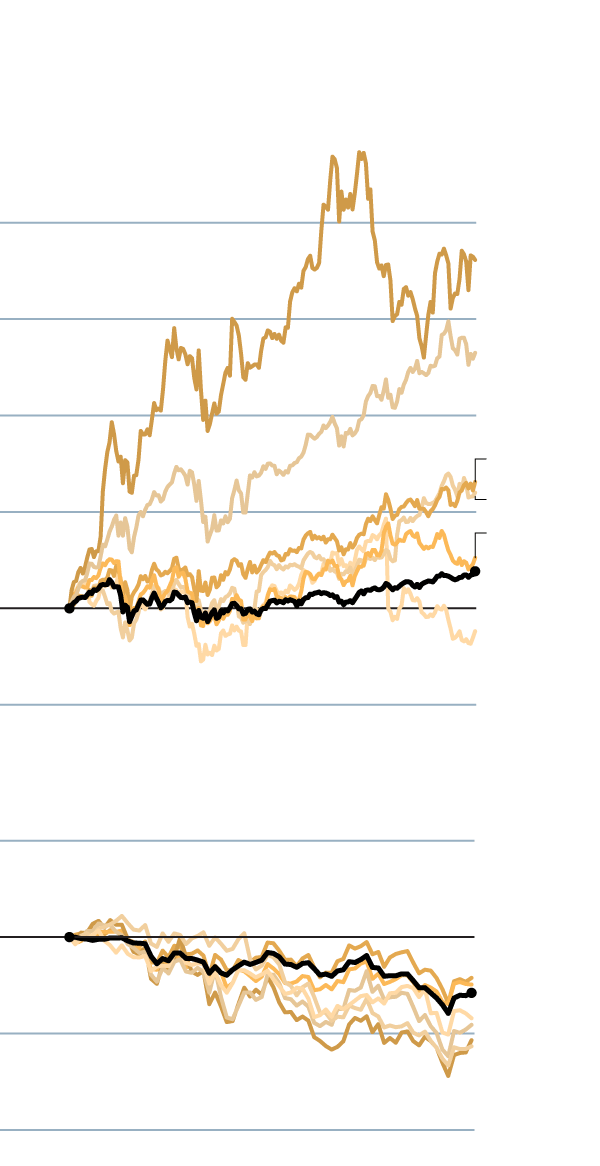 Technology stocks versus the

The market’s fate also depends on whether investors fall back in love with large technology companies. Last year, companies like Facebook, Apple, Amazon and Netflix helped push key stock benchmarks like the S&P 500 and Nasdaq composite to records, and then dragged those indexes down when the companies went into free-fall.

The tech giants’ shares plunged in part because they were deemed to be too expensive. Put another way, investors went from being optimistic that the companies’ future earnings would be terrific, to worried that they wouldn’t.

Some of the large tech firms also face substantial problems in their own operations that could take time to resolve. Apple, for example, counts on China as both a market where it sells iPhones and a manufacturing hub.

Facebook is spending large sums of money to try to protect its network from interference. Any sign that its systems have been abused with the goal of swinging an election could subject it to regulation.

Facebook is not alone in facing this concern. Some analysts say that large tech companies are now in a position to similar to what big banks confronted after the financial crisis of 2008.

“The tech companies are a heck of a lot better run than the financial companies were in 2007,” said Savita Subramanian, equity strategist at Bank of America Merrill Lynch, “but their incentives may not be aligned with the best interests of employees and shareholders.”

The United States economy has to grow at a strong enough pace to deliver the corporate earnings that investors are hoping for. But if the economy grows quickly, investors may return to worrying about higher interest rates.

If the Fed can tread a delicate middle ground, the trade war winds down and the economies of Europe and China stabilize, a recovery in stock prices could hold.

“I am not sure the upside for market is higher than where we’ve already been,” Mr. Paulsen, the strategist, said, “but 2019 could still be a good year.”

All the stimulus check qualifications now, 3 huge ways they could change in the next payment

ICYMI: We test out the latest Samsung Galaxy smartphones