Is BroApp stunningly sexist or a clever parody? Perhaps the most depressing thing is that we can’t tell

“BroApp is Your Clever Relationship Wingman”, the website crows. The Android app “Automatically message your girlfriend sweet things so you can spend more time with the Bros”, apparently – conjuring images of the loud and unpleasant jocks who only really seem to exist in American high school teenage dramas. But is it real? 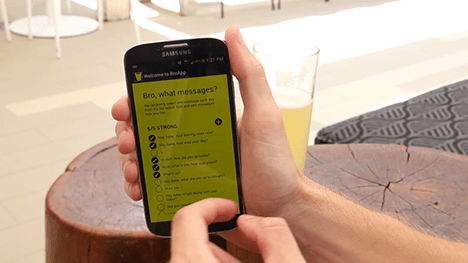 The website has been doing the rounds on social media as the world has been trying to figure it out. The way the app purports to work is pretty clever. Essentially, you tell it which contact is your girlfriend, and with some regularity it will text her some “sweet things”, so you can continue to ignore her. You can even set it up so that if you’re connected to her wifi network, it won’t text, as that will give the game away. Similarly if you’ve actually deigned to text her recently, it will refrain from texting for a while, lest the incongruity suggest that it is automated.

I know what you’re thinking: “But astonishingly, I actually enjoy spending time with my girlfriend and like to talk to her and treat her like a human being”.

Clearly you’re not in the target market. Watch this pretty hideous trailer to see more:

So whilst the default reaction is to be pretty horrified, there are definitely questions over whether it is real – or just an elaborate parody. Perhaps the biggest giveaway is the incredibly knowing video – not only does it feature references to Doge and Flappy Bird, but check out the supposed contact list: 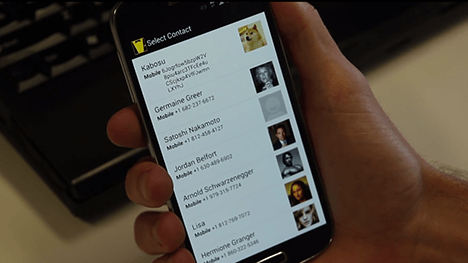 Amongst the list is well known feminist writer Germaine Greer, and Jordan Belfort – the man who The Wolf Of Wall Street is based on… surely the creators know what they’re doing is intensely sexist? Belfort isn’t a man one would want to consciously emulate.

Bemusingly Bitcoin creator Satoshi Nakamoto is also on the list. And under Kabosu – the Doge dog’s listing isn’t a phone number but what looks like could be encrypted text: 6Jogrfow5bzpW2V8piu4arc3TFcEe4uCScjkxp4VfFJwmnLXYhj – can anyone decode this? Does it contain a hidden message?

And besides… surely no one would be crazy enough to actually make this app?

The depressing thing is that we can’t tell for sure. Given the tech industry’s, umm, somewhat hostile approach to women in the past, it could be that someone truly thought that this was a good idea… but we’re just hoping that it’s a fake.