Women are more likely to hold part-time jobs: 24 percent of working women had part-time jobs in 2013, compared with 13 percent of men, according to the Labor Department. Bonnie Altwerger sits for a job interview with Jessica Cortes as she looks for part-time work in 2013 in Sunrise, Fla.
JOE RAEDLE/GETTY IMAGES

Whether or not the “gig economy” is set to steamroll the workplace as we know it remains to be determined. As Josh Zumbrun and I report today, economists seem to agree that the phenomenon of people working multiple “gigs” to stay afloat has not materialized in the data collected by the U.S. government. Whether that’s a problem with our ways of measuring it, or a sign it’s not yet big enough to make an impact at the national level, is anyone’s guess.

Take, for instance, the proportion of multiple-job holders, which one imagines would correlate with an economy in which an increasing number of people cobble together a livelihood through several part-time or one-off jobs. It’s been steadily declining since the 1990s, and is near a historic low. But look a little closer and an interesting pattern emerges. At all age groups, women are more likely to hold multiple jobs than their male peers. 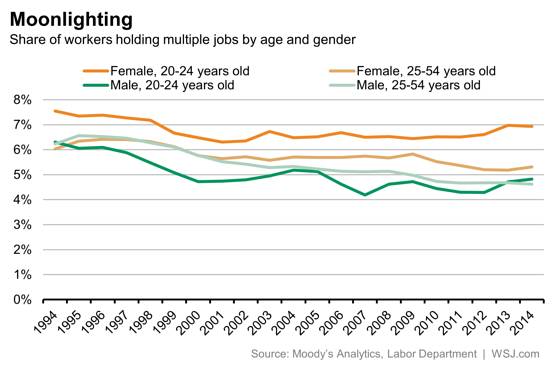 Why has the proportion of male multiple-job holders shrunk more than twice as quickly as the share of women? One explanation is the tenacious gender pay gap, Ms. Wilson said, although she notes that it is impossible to tell simply from the numbers whether the higher share of women juggling multiple jobs stems from economic necessity or a preference for part-time work.

“Young women may be choosing to piece together multiple jobs because the jobs they hold pay less,” Ms. Wilson said.

Women are more likely to hold part-time jobs: 24 percent of working women had part-time jobs in 2013, compared with 13 percent of men, according to the Labor Department, a pattern that holds true in pretty much the rest of the world, too. And they’re more likely to work in low-paying industries, such as retail and fast food, points out Ms. Wilson, meaning they could need several in order to make ends meet. Less than half of retail workers, for example, a workforce that’s 62 percent female, have full-time jobs. 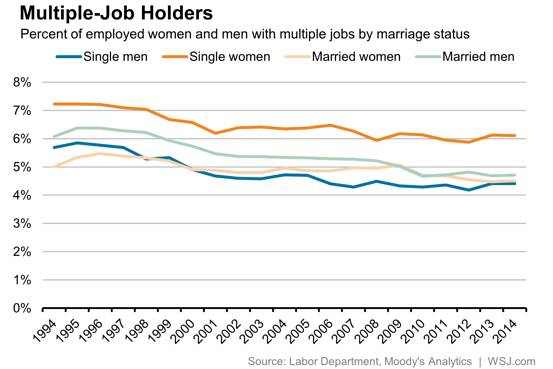 “We’re seeing an increase in homes tended by single mothers, and we see they’re much more likely to hold jobs around their children’s schedule,” said Aparna Mathur, an economist at the American Enterprise Institute who has studied the labor market.

Adam Ozimek, an economist with Moody’s Analytics, pointed out that multiple-job-holding rates by gender diverge in the early 2000s, as marriage rates fell. He suggested that less marriage means fewer men taking multiple jobs to support their families while women could stay home with kids

“For men, marriage tends to increase the multiple-job-holding rate and for women it tends to decrease it,” he said.

Mr. Ozimek also noted that many women juggling multiple jobs were in fields such as health and education. Teachers often work other jobs during summers off, and fields such as dental hygiene, where women are overrepresented, are less flexible when it comes to opportunities for overtime hours.

As he points out, you can’t really see patients at night if you work at dental clinic.

Women Earn 81.9 Cents for Every Dollar a Man Earns