Is the IMF Cutting Corners for China? – Real Time Economics 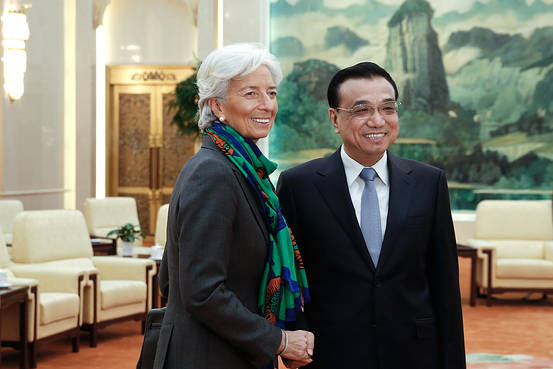 IMF Managing Director Christine Lagarde met Chinese Vice Premier Li Keqiang in Beijing in March. She said then that including the yuan in the IMF’s elite basket of reserve currencies was “not a question of if, it’s a question of when.”
LINTAO ZHANG/GETTY IMAGES

Is the International Monetary Fund cutting corners to bring China into the fold?

Over the last six months, the IMF has officially escorted China into the top tier of global economic powers by bestowing legitimacy to the country’s currency policies.

The IMF reversed years of fund criticism by declaring the yuan fairly valued. It added China to a list of countries that report their foreign exchange reserves. And Monday it included the yuan in its elite basket of lending currencies.

The IMF’s actions are designed in part to spur Beijing to press ahead with promised economic reforms and ensure the government takes greater responsibility on the global stage.

But some IMF watchers say the IMF is giving the Asian powerhouse too much credit for a work that’s still in progress. Instead of encouraging economic liberalization, the fund may be accommodating the world’s second-largest economy as China gains new global clout.

The risk is that now Beijing has won IMF backing, it could put off its plans to open up its markets. A decelerating economy is creating headwinds for reformers.

Beijing has sought to reassure.

Ted Truman, a senior fellow at the Peterson Institute and a former top U.S. Treasury diplomat, lambasted the fund last month after it announced China was providing data for the IMF’s currency reserves report for the first time.

“They appear to have kowtowed before an invisible emperor,” he said in a blog post.

Mr. Truman complained the IMF isn’t requiring China to report all of its reserves data, only a representational share.

“A more serious concern is that the IMF staff and management appear to have lost sight of the purpose in the collection and publication of the [reserves] data: promotion of transparency,” Mr. Truman said.

A senior IMF official said Monday the transition to more complete reporting of its reserves over two to three years is needed to protect against public disclosure of the full composition of China’s stockpile.

China joining the IMF’s reserves report “is a huge step forward as far as transparency is concerned,” the official said.

Some economists also question whether it is right to include China’s currency in the IMF’s basket of lending reserves while the government still keeps a tight grip on cross-border flows of capital.

Some China watchers say the move is in large part political: both to encourage more liberalization by Beijing and as consolation for the fund’s failure to enact governance overhauls that would give China more voice and vote at the fund.

The second of the IMF’s two criteria—determining whether a currency is “freely tradable”—leaves enough latitude in its definition for staff to find arguments for both approval and rejection of the yuan, some economists contend.

The IMF acknowledged Tuesday that the liberal interpretation of the “freely tradable” criterion suggests “there are additional currencies that could potentially be determined” to fit the fund’s requirements.

“The application of these criteria in assessing specific currencies ultimately requires the exercise of policy judgment,” IMF staff said in their report.

IMF board members also said there still exist “some remaining operational challenges” related the ability of the fund’s 188 member countries to tap yuan markets, but expected China will allow them “unencumbered access” to both onshore and offshore markets.

Last month, Peterson’s Mr. Truman took IMF managing director Christine Lagarde to task for taking the highly unusual step of endorsing yuan inclusion weeks before the board was scheduled to meet on the matter.

Ms. Lagarde, he said, “appears to have decided to give the Chinese authorities the political trophy of inclusion of their currency in the [reserve] basket.”

A senior official said Monday the staff recommendation was completely independent, and had no reservations about backing the yuan’s inclusion.

“There is nothing political about it,” he said. “I don’t see any leniency in either the application of the criteria or the assessment.”

Scott Kennedy, a top China hand at the Center for Strategic and International Studies, noted this isn’t the first time the IMF added a currency to its basket from a country with closed financial borders. The fund added Japan’s yen to its lending reserves in 1980 even though Tokyo didn’t fully open its capital account until a decade later.

Earlier this year, the IMF was also at odds with its biggest shareholder, the U.S., over its declaration the yuan was roughly at par value. Washington pointed to the large trade surplus China still maintains as evidence the yuan needed further appreciation.

The IMF also said Beijing’s 2% currency depreciation in August was a welcome step towards making the yuan more market-determined. The move initially sparked fear Beijing was returning to a yuan-depreciation strategy to leverage exports amid a slowdown.

China’s exchange rate policy is still fomenting criticism in the U.S. Congress despite a major appreciation in the yuan over the last decade.