Is There Really a Shortage of Construction Workers? – Real Time Economics 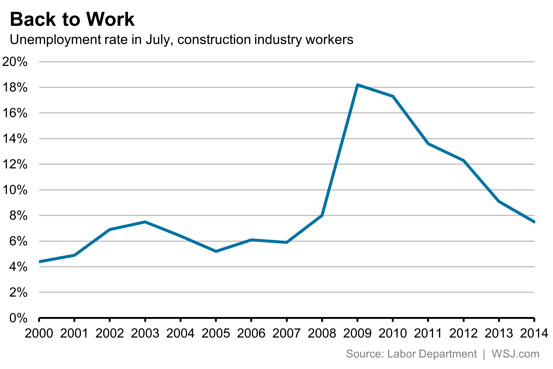 One of the mysteries of the housing market’s uneven rebound centers on what home builders say is a shortage of qualified workers. 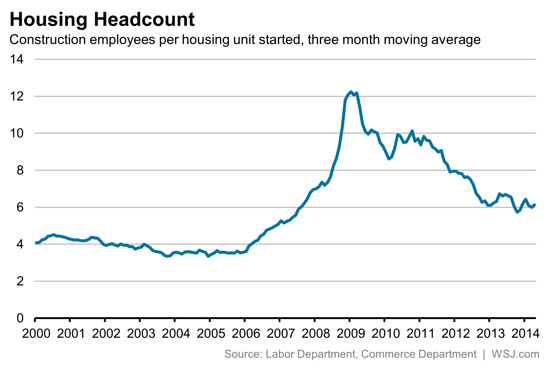 And if employment for construction workers was tight, then wages would be rising faster; much of the recent pick-up in residential construction wages has barely recouped the big drop in average paychecks during the bust. 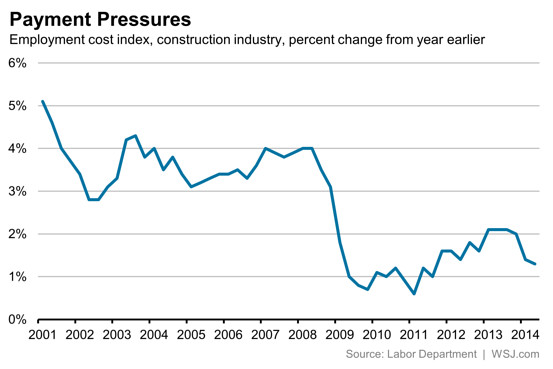 If labor shortages “were truly having a first-order effect on retarding growth in the housing market, one would naturally expect to see wages for construction workers and prices of construction supplies rapidly accelerating,” said economists at J.P. Morgan Chase & Co. in a June report. “Nothing like this is even remotely occurring in the data.”

So are builders’ complaints of a worker shortage not credible? Not necessarily. Anecdotal and survey data suggest builders may face a shortage of specific laborers in certain markets, even though concerns about a widespread labor shortage may be over the top.

A survey released by the National Association of Home Builders last month sheds some light on the disconnect.

The survey showed that the specific tradesmen that are most in demand tend to be framers and carpenters—trades whose skills are fairly specific to putting up new homes and less transferable to other fields. Painters, roofers, electricians and other workers who might have found employment doing remodeling or other improvement work throughout the downturn have been easier to come by, according to the builders’ survey.

The upshot may be that the framers and carpenters—who are both harder to find right now and who may have had fewer work opportunities during the downturn—may have “quit the sector entirely,” says Paul Diggle of Capital Economics, in a recent report. 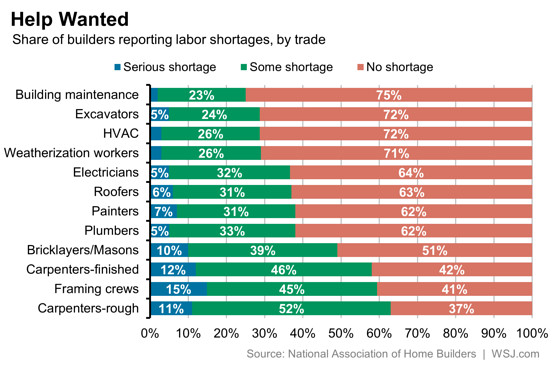 Overall, the builders’ survey found that 46% of respondents reported worker shortages among nine different categories of tradesmen, up from 34% in 2013 and 21% in 2012. The NAHB stopped polling its members during the housing bust, but the 46% figure is higher than in any of the surveys between 2002 and 2006, when builders were putting up twice as many homes. The figure is lower than during the 1996 to 2000 period, when the economy was growing much faster than it is today and the unemployment rate reached 4%. 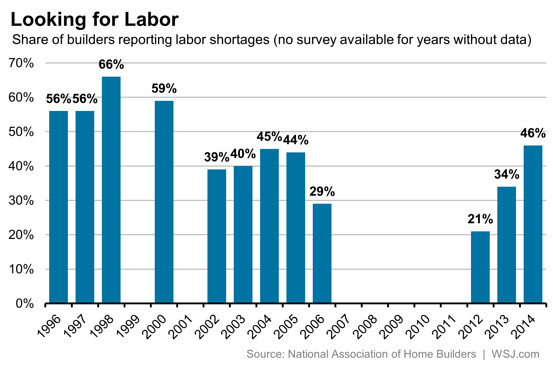 The upshot, says Celia Chen, a housing economist at Moody’s Analytics, is that “aggregate numbers miss nuances in the home building industry.” Labor data don’t distinguish between individual markets and between skilled and unskilled workers. As a result, “builders could struggle to find labor in some sub-markets despite a balanced national market.”

For example, the NAHB says its members are reporting bigger shortages among subcontractors, which account for a large portion of home-building jobs and which tend to be self-employed workers or sole proprietors that could go uncounted as employers or employees by government statisticians.

Builders’ labor headaches could be a reason that they’ve been aggressively pushing to raise prices, a move that appeared to backfire after mortgage rates jumped last summer, robbing home sellers of more pricing power. Nearly two thirds of builders surveyed by the trade group said worker shortages had led them to pay higher wages, and three in five said that shortages had made it harder to finish projects on time. (This story offers a deeper dive on builders’ labor headaches and potential effects on housing markets.)