It Only Takes $10,400 to be Richer Than Most Millennials – Real Time Economics 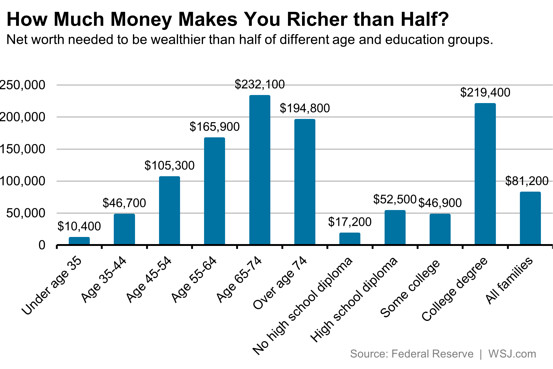 Are you a millennial with a net worth of more than $10,400? Congratulations, you’re wealthier than half of your generation.

The figure comes from the Federal Reserve’s Survey of Consumer Finances released today, which tracked the net worth and income of American families in 2013. The report breaks down finances by age, income, home ownership and a range of other factors.

• First, obviously, incomes. Incomes for most Americans, adjusted for inflation, have been falling in recent years. If you earn more than $35,300, you’re bringing in more than half of millennials, according to the Fed’s survey.  In 2010, those under age 35 had median earnings of $37,600. That’s a drop of $2,300 during the past 3 years. (As an aside: These Fed statistics cover families headed by someone under age 35, roughly encompassing the entire adult millennial generation and some of the oldest members of Generation X, depending on the definitions used. It excludes millennials still living at home and thus counted as part of their parents’ families.)

• Third, many millennials have avoided stocks and missed out on surging equity prices over the past five years. Today 38.6% hold stocks, either directly or indirectly. That’s down slightly from 2010 (even though prices have climbed relentlessly in that period) when 39.8% held stocks. In 2001, about half of people under age 35 owned some stocks.

• Fourth, few people in this age group own their homes (and many of those who bought homes earlier than 2010 did not do well on the investment). Only 35.6% of those under age 35 own homes, compared with 40.6% before the recession.

It only takes $10,400 to be wealthier than half of millennials (the median) but it takes $75,500 to be richer than millennials on average.

Why is the average so much higher than the median? Take a simple example of three guys: Tom, Steve and Mark. Tom has a net worth of negative $10,000 due to outstanding student loans. Steve has a net worth of $10,000. Mark (let’s say his last name is Zuckerburg) has $33 billion. Their median net worth is $10,000. Their average is $11 billion. A few outliers (like Mr. Zuckerberg) can earn enormous amounts more than the median and drag the total up for everyone; conversely, it’s rather difficult to get yourselves millions of dollars in debt and drag the figure down.