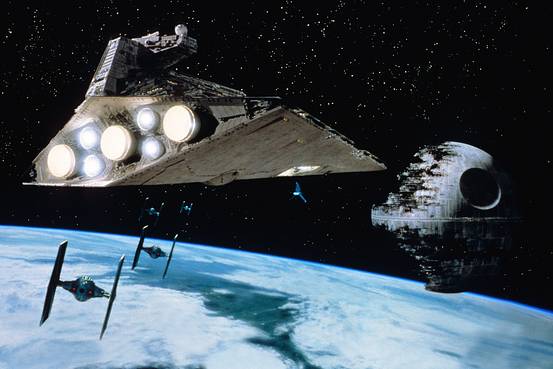 The Empire is back. Or at least, something that looks an awful lot like the Empire.

The trailers for “Star Wars: The Force Awakens,” have featured plenty of stormtroopers, TIE fighters, and really evil-looking guys who are the apparent heirs to the Evil Galactic Empire from the original trilogy. But the last we saw, the Emperor was dead, the second Death Star was destroyed, and the Dark Side was vanquished. So how’d those guys come back?

A Washington University economics professor is making the case that the destruction of the two Death Stars unleashed an economic collapse in that galaxy far, far away. In a tongue-in-check white paper he released earlier this month, he argues that the financial crisis overwhelmed the Rebel forces in a way the Empire itself could not. The paper itself is a perfect mix of sober economic analysis and Star Wars fandom, referencing everything from Bothan spies to “a continuous probability density function.”

The paper, titled, “It’s a Trap: Emperor Palpatine’s Poison Pill,” won’t be sent out for peer-review, said Zachary Feinstein, the paper’s author. Mr. Feinstein is all of 28 years old, wasn’t alive when the original trilogy was in theaters, and is in his second year of teaching at the school. He did it for fun, but he noted that the kind of analysis he used is identical to the kind of analysis he’d use to model real crises. “It is real academic research,” he said by phone on Thursday. “I could’ve looked at 1998, at the Asian crisis. Instead I looked at Star Wars.”

The paper sets out to show how the destruction of the two Death Stars was an economic calamity for the galaxy, and that the scrappy underdog Rebel Alliance almost certainly would not have the means to enact a bailout that would rescue the economy. To do this, he makes a model of the costs of building the two moon-sized space stations – a massive government spending project that would have cost $419 quadrillion for the steel alone, he calculated – and the financing necessary for it. He draws in real-world parallels like the costs of constructing aircraft carriers and the Manhattan Project. 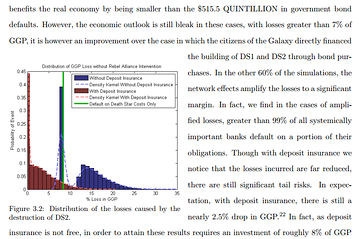 From there, he builds a model of the galactic banking system, and the debt those banks would almost certainly be carrying after the Empire financed the construction of the two projects. To keep it simple, he excluded things like the cost of interest, and assumes the Empire didn’t have any other debt outstanding. “This is assuming that Emperor Palpatine was fiscally conservative and kept the overall debt load under control,” Mr. Feinstein wrote in the paper.

When the two battlestations were destroyed, the government defaulted on its debts, which started a banking crisis, which led to an economic collapse. In fact, he says, this would’ve been something the Emperor actually planned out. “The true power of the technological terror is from the power of economic terror unleashed in the case of its failing,” he wrote.

The Rebels were able to destroy both Death Stars, but in this scenario, it unleashed a sort of Mutually Assured Destruction, since the Rebels almost certainly lacked the foresight to plan for winning the peace, Mr. Feinstein argues. To rescue the Galaxy from the economic fallout would almost certainly require a bailout equal to 15-20% of the Galactic Gross Product, he says, an amount the Rebels simply wouldn’t have on them. “The Rebel Alliance…never placed importance on long-term planning.”

That opened a power vacuum, into which the bad guys have stepped. Mr. Feinstein thinks his paper bridges the events at the end of “Jedi” and the start of “Force Awakens” in a way that makes sense, and hopes to hear some mention of galactic economic considerations in the new movie, which he’s seeing Thursday night. But he doesn’t expect it.

“I doubt that’s going to be the case,” he said, “given how everybody reacted to the trade negotiations in the prequels.”