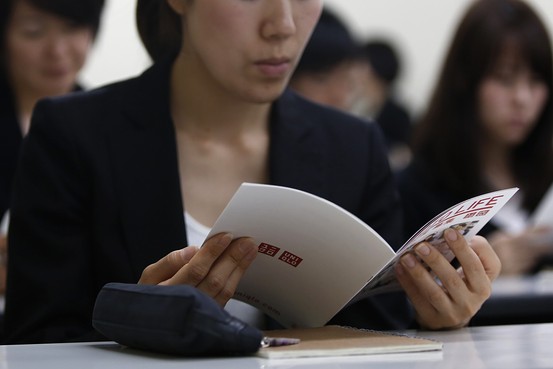 Women appear to be gaining ground in Japan’s workforce as the employment situation brightens.

Prime Minister Shinzo Abe has trumpeted the need to get more women in the workforce as key to putting the world’s third-largest economy on the path to long-term growth. The proportion of females in Japan’s overall labor force lags many other rich nations and with the population rapidly aging, economists say maintaining growth will depend on getting more women working.

As growth has picked up over the past 18 months, economists say that’s happened naturally as firms desperate for workers hire more women.

The number of working-age women employed rose by 1.7% on year in June, according to official figures, the 21st month of increase. That compared to a 0.4% increase for men, and brought the employment rate of women between 15 and 64 to 64%, the highest since the government began compiling such data in 1968.

The unemployment rate rose to 3.7% in June from 3.5% in May but this appears to have been because more women are now seeking work. The jobs-to-applicant ratio climbed to 1.1 – the highest since 1992. Capital Economics said this was a sign that consumer spending will soon pick up, helping to underpin Japan’s economic recovery.

Women, though, still have a long way to go in japan until they are paid salaries comparable to their male peers. One of the main reasons women are getting jobs is because companies are adding more part-time staff, lower-paid positions that women tend to fill.

About two-thirds of non-regular employees, which includes contract employees and part-time workers, were women in June. While part-time jobs rose by 360,000 for both men and women, full-time, salaried positions fell by 200,000.

“Women’s employment has a lot more room to grow compared to men,” he said.