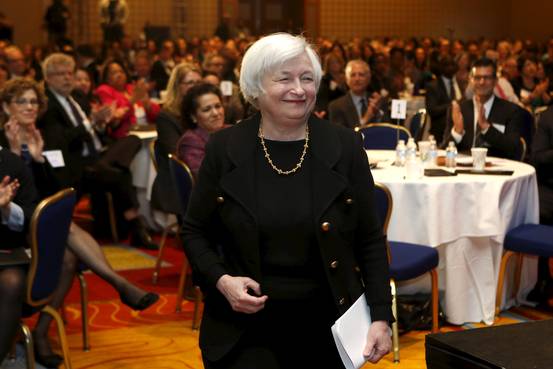 Federal Reserve Chairwoman Janet Yellen is greeted by the audience as she arrives to deliver remarks at the Federal Reserve’s ninth biennial Community Development Research Conference focusing on economic mobility, in Washington on Thursday.
YURI GRIPAS/REUTERS

In a speech defending the Federal Reserve’s interest in economic inequality issues, Chairwoman Janet Yellen said Thursday more work needs to be done to understand what conditions allow people to rise up and down the income ladder in the U.S.

“We know that families are the locus of both opportunities and barriers to economic mobility,” but from that point, there remains a lot of uncertainty about the forces that affect and shape a person’s performance in the economy, Ms. Yellen said. Her comments come from the text of a speech prepared for delivery in Washington before a Fed community development research conference. Ms. Yellen also pushed back at those who have been uncomfortable with her recent comments on income inequality. Some believe that a central bank that is charged with promoting price stability and job creation has no business addressing politically-charged matters of individual economic performance. Ms. Yellen faced considerable criticism from Republicans in her last visit before congress from some legislators who believed her comments on inequality were political in nature.

In her speech, Ms. Yellen rejected these arguments. “Economic inequality has long been of interest within the Federal Reserve System,” she said, citing a 2007 speech by then-Chairman Ben Bernanke on the matter. Her own speech last October was in that same tradition, she said.

She said the broader public cares, too. According to a survey, “the gap between rich and poor now ranks as a major concern in the minds of citizens around the world,” she said, adding “in advanced economies still feeling the effects of the Great Recession, people worry that children will grow up to be worse off financially than their parents were.”

Ms. Yellen observed these concerns cut across ideological lines, and that it is clear it is a matter than needs more study.

When it comes to economic mobility, Ms. Yellen said more knowledge is needed on how one’s circumstances at birth affect earnings and wealth later. Family dynamics and expectations can also play a role, as well as events over which individuals have no control.

5 Quotes From Janet Yellen on Income and Wealth Inequality

Inequality in America in 10 Charts