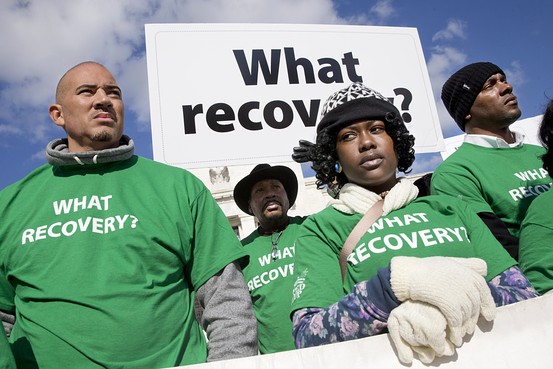 Anthony Newby of Minneapolis, left, Reginald Rounds of Ferguson, Mo., Octancia Adams of Minneapolis and Ed Donaldson of San Francisco join in a gathering of 20 community organizations, faith leaders, policy experts, and labor unions during a news conference outside the Federal Reserve on Friday before their meeting with Chairwoman Janet Yellen.
Associated Press

Federal Reserve Chairwoman Janet Yellen met Friday with a coalition of community activists who are urging the central bank to resist pressures to raise interest rates before the labor market has fully recovered and calling for greater public input into the selection of regional Fed bank presidents.

At a press briefing outside the Fed before the meeting, organized by the Center for Popular Democracy and featuring workers, community organizers and liberal economists, the activists said the idea that the economy was close to full recovery was belied by the joblessness and underemployment of millions of Americans.

“We’re here to launch a national campaign for a stronger economy and for a reformed Federal Reserve,” said Ady Barkan, staff attorney at the center, a left-leaning national nonprofit organization. “The economy is not working for the vast majority of people,” he said, citing high unemployment, inequality and large racial disparities.

The Fed declined to comment on the meeting or the activists’ recommendations.

The Fed last month ended its bond-buying program aimed at supporting economic growth, citing “substantial improvement” in the outlook for the labor market. Those present at the briefing said the experience of many communities across the country suggests otherwise.

One of their biggest complaints was the inability of workers to find full-time work, a problem that has worried Fed officials and suggests the job market is still some way from full health. 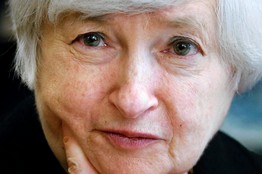 “My job used to be steady, something you could count on,” said Jean Andre, 48, of New York, who works on logistics in the film industry. “I’m one of the names at the end of the movies that nobody reads. But I’m underemployed, I just can’t get full-time work anymore, not like I used to before the crash.”

With the unemployment rate 5.8% in October, Fed officials are debating when to begin raising interest rates from near zero. Many investors expect the central bank to start raising its benchmark short-term rate sometime in the summer of 2015.

Josh Bivens, an economist at the liberal Economic Policy Institute in Washington, noted that black unemployment is generally double the overall level. Black communities would be among those hit hardest by potentially premature Fed rate increases, he said.

The activist group also called for greater public input into the selection of the presidents of the Fed’s 12 regional banks. This comes ahead of the retirements next year of Dallas Fed President Richard Fisher and Philadelphia Fed President Charles Plosser. The two have been some of the most vocal opponents of aggressive Fed efforts to reduce unemployment—such as holding short-term rates near zero and buying bonds to lower long-term rates–arguing such policies risk fueling excessive inflation and asset bubbles while doing little good for the economy.

Fed presidents are selected by the boards of directors of the regional Feds, with the approval of the Washington-based Fed board of governors. The regional boards are composed of bankers, business executives and community representatives,

Kati Sipp, a director of the Pennsylvania Working Families Party who spoke at the briefing, said many of the regional bank board members designated as community representatives are not truly representative of the communities they are supposed to serve. “Right now in Philadelphia we have Comcast executives that are representing the public, and we think that it’s important for us that real people are also representing the public in Federal Reserve policy making.”

Michael Angelakis, vice chairman and CFO of Comcast Corp., is deputy director of the Philadelphia Fed’s Board.

“In Philadelphia we’ve had an 8% average unemployment rate for this year and it’s a 14.5% unemployment rate for the black community,” Ms. Sipp said. If Mr. Plosser believes the economy is back to full health, she said, then he hasn’t visited many of his own city’s troubled neighborhoods. “If he had, he would not believe that our economy has really recovered.”

Mr. Plosser has said he believes the job market is close to full employment and the economic recovery is genuine, if unremarkable.

The Philadelphia Fed announced Friday that Korn Ferry , the executive search firm hired to conduct the search for a new president, established an email address “to receive inquiries.” Asked if the move was in response to the protests, a spokesperson said it was “one part of our broad search process.”

5 Quotes From Janet Yellen on Income and Wealth Inequality