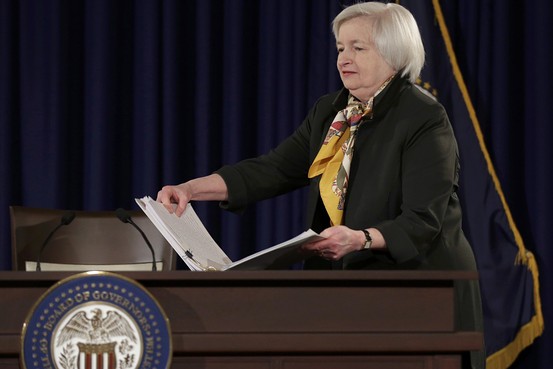 WASHINGTON—Federal Reserve Chairwoman Janet Yellen said Wednesday the door to increasing rates opens in June, but cautioned that any move toward higher borrowing costs will depend on how the economy performs.

Ms. Yellen, speaking at a press conference held after the conclusion of the central bank’s two-day gathering of the rate-setting Federal Open Market Committee, was addressing changes in the central bank’s official policy statement that ended a commitment to be “patient” on the timing of rate increases. That shift had been widely expected amid increasing speculation over the timing of lifting rates off of the current near-zero levels occupied since late 2008.

“While it’s still the case that we consider it unlikely that economic conditions will warrant an increase in the target range at the April meeting, such an increase could be warranted at any later meeting, depending on how the economy evolves,” Ms. Yellen told reporters.

The change in the language in the FOMC statement “does not mean that an increase will necessarily occur in June,” Ms. Yellen said, although she added that a rate hike then can’t be ruled out.

Read the Full Text of the Fed’s March Statement

Economists React to the Fed’s March Statement: ‘No Longer Patient, But Definitely Not Impatient, Yet’

The Fed Doesn’t Think the U.S. Economy Is at Full Employment, After All

No Decisions Yet About Timing Of Fed’s Reinvestment Process End

The Fed Is Still A Chaperone, Worrying About A Different Punch Bowl

Sign up for the WSJ’s central-bank newsletter, Grand Central