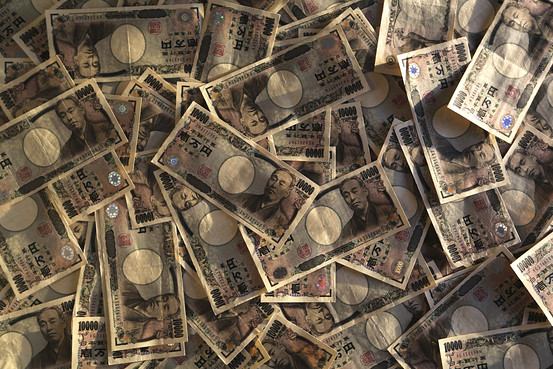 The latest Bank of Japan figures show that Japanese firms continued to add to their cash holdings in the last fiscal year.
Bloomberg News

Has Abenomics restored animal spirits to corporate Japan? Not quite, at least according to one important measure.

The total amount of cash held by companies in Japan continued to rise during the fiscal year ended March 31, reaching a record ¥232 trillion, or about $2.3 trillion, according to data released Wednesday by the Bank of Japan. That suggests firms remain cautious in their outlook despite the recent economic recovery.

To explain the long slump in Japan’s economy, experts have blamed its companies for hoarding cash internally, instead of investing the money for future growth or sharing it more generously with shareholders or employees.

One of the goals of Prime Minister Shinzo Abe’s pro-growth policies known as “Abenomics” has been to spur banks to lend to companies, by injecting funds into the financial system through monetary easing. With extra cash on tap, companies can spend more to expand their activities, boosting job creation and incomes, and in turn consumption and profits, adding momentum to the recovery in a virtuous cycle.

The latest flow of funds data fell short of confirming such an outcome. On the contrary, the BOJ said companies’ cash holdings rose by 4.1% from a year earlier after a 5.2% gain during the previous 12 months, marking the sixth consecutive year of increase. Meanwhile, the balance of borrowing by non-financial companies rose by a miniscule 1.0% to ¥349 trillion. The total financial assets of non-financial firms increased 9.8% from a year earlier to ¥942 trillion, due in part to growth in the value of equity holdings.

Similar behavior was evident among financial institutions. The amount of deposits at the nation’s banks soared by ¥31 trillion, while lending only expanded by ¥11 trillion. The figures underscore the difficulty banks face in finding borrowers.

The latest data could add fuel to an ongoing debate over the effectiveness of a corporate tax cut pursued vigorously by the Abe administration as part a new round of its growth strategy to be finalized later this month. Proponents say a lower tax burden will allow companies to invest more aggressively. Critics say that in an environment where companies are already awash in cash, such a cut would have little impact.

Increased savings could also lead to more pressure on companies from shareholders to increase dividend payouts, particularly after Japan saw a jump in share ownership by foreign investors who tend to be more demanding.

To be sure, companies are stepping up activities in some important aspects even as they continue to increase cash savings. The balance of their foreign direct investment rose to ¥66 trillion, up 21% from a year, though the pace was slower than the 25% increase the previous year. Finance ministry data released earlier this month also confirmed capital outlays by non-financial companies jumped 7.4% during the January-March quarter.

The BOJ’s latest flow of funds data also offered interesting insights into various other aspects of Japan’s economy that have come under scrutiny thanks to the policy shifts implemented by Mr. Abe.

Financial assets held by households rose 3.3% from a year earlier to ¥1.63 quadrillion (about $16 trillion), thanks in large part to improvements in Japanese stock prices amid the Abenomics-induced optimism.

Still, Japanese investors remain risk-averse. The amount of cash held by households was at a record ¥865 trillion, accounting for 53% of their financial wealth.