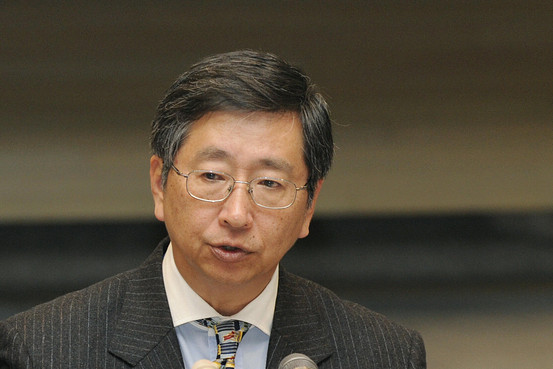 With an ultimate goal of stimulating economic growth, hopes are high that the proposed Trans-Pacific Partnership free trade agreement will lead to a spike in cross-border business deals among member countries. Assuming that’s the case, Japan’s chief TPP negotiator posed an interesting question: why does the pact sidestep a key factor that affects practically all international business activity?

“Why aren’t monetary and fiscal policies subject to economic partnership agreements?” Koji Tsuruoka rhetorically asked at a Tokyo symposium Tuesday. “Is it because there is a coalition of financial services regulators and they don’t want anyone to intervene in their world?”

Mr. Tsuruoka, who just returned from a 10 day meeting of TPP senior negotiators in Ottawa, noted “this is a question we may be asked as negotiators in the future.” The TPP’s 12 countries, including the U.S. and Japan, are negotiating to conclude most of the talks by the end of the year.

While free trade agreements typically focus on tariff and labor issues, how a country guides its currency and controls its lending rates are two variables that could have significant influence over the cost of cross-border trade.

In Japan’s case, the central bank’s recent aggressive monetary easing brought about a 20% fall in the yen’s value against the dollar. While that allowed domestic exporters to pocket more revenue and profits in yen-denominated terms, it also had the reverse effect of siphoning off the profits of overseas companies selling goods in Japan.

Mr. Tsuruoka had a timely reason for linking the TPP to monetary policy. The European Union is in ongoing negotiations with Japan over a free trade agreement, but it also wants Japan to agree with conditions outside of trade, such as the protection of human rights, before it will ratify any such pact.

He argued that if an area as broad as human rights can affect whether a trade agreement is reached,  then why not fiscal and monetary policies?

Countries already coordinate fiscal and monetary policies, via forums such as the Group of Seven, where finance ministers and central bankers can make broad-reaching agreements behind closed doors. As it stands, the current TPP framework doesn’t touch on issues such as currency market intervention.

Mr. Tsuruoka stressed he was just playing the devil’s advocate and wasn’t actually calling for monetary policy to be included in the TPP talks. But he isn’t alone asking such a question.

Last year the White House was called on by a majority in each chamber of Congress to include currency discipline in future trade agreements, including the TPP.

“We think part of a path to completing the TPP is, and ensuring it actually goes into effect is, to include currency discipline and stop direct market intervention,” said Matt Blunt, president of the American Automobile Policy Council, a group representing major U.S. automakers.

The group even conducted a review of the impact of an aggressive monetary easing introduced by Japan last year. It concluded that the policy’s main impact is spurring domestic demand, and therefore acceptable.

Some of the panelists at the symposium retorted that fiscal and monetary policies are simply too important to be left to trade negotiators.

“People have learned the hard way that it is important to have trust in their currency,” said Anne Le Lorier, vice governor of the Banque de France. She said that the state has other considerations and can’t be relied upon as the true guardian of the currency.

“At the end of the day, each country or monetary union decides for itself what monetary policy will be best for itself,” added Andreas Dombret, member of the executive board of the Deutsche Bundesbank. “Don’t forget that monetary policy makers are independent. Whatever you put into a trade agreement would not really necessarily work for us.”