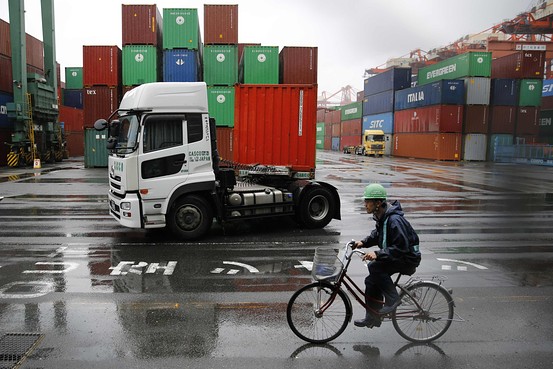 Japanese trade data for June, released Thursday, may not have encouraged analysts looking for a pickup in exports to end a two-year streak of trade deficits.

Yet the figures are not all cause for concern, some economists say.

True, there are worrying signs. Exports remain lackluster, even though U.S. growth is picking up, suggesting a lack of competitiveness. Meanwhile imports of electrical machinery are soaring. Japan’s trade balance looks likely to stay in the red.

Yet Capital Economics economist Marcel Thieliant says there’s room for some optimism. The seasonally unadjusted trade deficit has narrowed to Y822.2 billion in June from a peak of Y2.8 trillion in January.

Those that worry about Japan’s developing a structural trade deficit say it will make the nation dependent on foreign creditors – a risk given Japan’s huge public debt.

The large deficit helped push Japan’s current account – which includes trade and other income flows – into the red in late 2013. More recently, the current account has returned to surplus.

The crisis scenario goes like this: Japan starts to become a net importer of goods and services, sending the current account deficit in the red for good. If Japan becomes a net capital importer, it will have to rely more on foreigners buying Japanese government bonds to finance its public debts.

Economists say that as Japan has over a quadrillion yen of debt outstanding, there is no way foreign investors will accept Japan’s low yields. As foreigners demand higher returns to compensate them for holding JGBs, the government’s debt financing costs will rise, potentially causing fiscal havoc.

Mr. Thieliant is sanguine about those risks. By his calculations, the current account surplus should actually recover to 3.5% of gross domestic product by 2020 from 0.4% in 2013 as the trade situation improves.

Furthermore, ample savings by households and companies have been enough to finance the JGB market largely with domestic holdings, and that looks unlikely to change, he says.

But does that mean Japan is free from fiscal trouble? Not necessarily. “There is no reason for complacency,” he says. “There is no guarantee that private investors will continue buying JGBs at current low interest rates.” Current account data for June will be released on August 8.